Investment Perspectives: Australia, the lucky country (or is it?)

Since 2012, one of Australia’s biggest economic threats has been the collapse in mining investment.

It was the associated capex boom pre- and post-GFC that sustained Australia’s economic performance. But as projects came to an end in 2012, there was an expected drag on that performance.

Has Australia dodged another recession bullet?

Since 2012, one of Australia’s biggest economic threats has been the collapse in mining investment. It was the associated capex boom pre- and post-GFC that sustained Australia’s economic performance. But as projects came to an end in 2012, there was an expected drag on that performance.

Enter the Reserve Bank of Australia (RBA). By cutting interest rates from 4.75% to 1.5%, the RBA successfully managed to soften the decline in mining investment, which was replaced by a very strong residential cycle.

Australia’s luck just never seems to run out. The country’s 26-year economic run with no recession doesn’t seem to be ending any time soon. Consequently, the Australian dollar and bond yields are rising, and the widely-held expectation is that the next interest rate move may well be up.

At Quay, we are not so optimistic.

The first law of macroeconomics is: someone’s income is someone else’s spending. By extension, one person’s savings is another’s deficit.

This economic reality is summarised by sectoral balances, described as:

In Australia, these balances are available via the national financial accounts. Chart A highlights the interplay of these balances (as a percentage of GDP) over time. 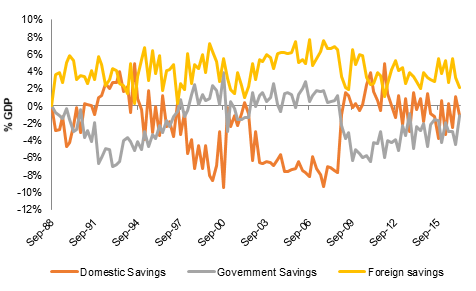 There are a number of important observations from this chart, and they point to significant policy challenges for the RBA in the medium term.

The foreign sector is a consistent ‘saver’ of AUD (the current account is generally always in deficit). Note: as long as we have a floating dollar, from a policy perspective there is little we can do to change this. It is therefore necessary for the government and the domestic sector to run a combined deficit to offset the foreign sector savings.

When the government saved (ran a surplus) between 1997-2007, there was a substantial decline in domestic savings–resulting in increased private sector debt. This coincided with a sharp increase in household debt, as households ‘borrowed the difference’ to offset government and foreign savings.

The spike in government deficit in 2009 immediately added to domestic savings.

The recent decline in government deficits as a proportion of GDP has coincided with an overall decline in domestic savings, adding more pressure for household to borrow. 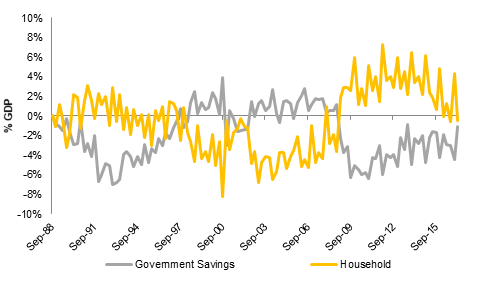 Something has to give

Given the mining capex cycle ended in 2012 and the Federal Government has remained determined to minimise the fiscal deficit, someone has to step up by running a deficit. The RBA did its bit and encouraged households to increase borrowing by reducing interest rates—and household debt has been on the rise ever since.

Today policy makers and commentators are aware of the economic risks associated with excessive household debt, but often wrongly blame a housing boom as the culprit. As a result, APRA and the RBA are trying to place limits on household credit, without realising the increase in household credit has been the main driver of economic performance since 2012.

In a world where politicians in Canberra are terrified of credit ratings agencies opining on our fiscal outlook, government deficits are not increasing any time soon. And while foreigners continue to net save, households will eventually crack under the weight of debt.

This means one (or both) of the following scenarios is all but inevitable.

The RBA continues to drop interest rates so the non-government domestic sector can increase credit and debt.

The foreign sector demand for AUD savings diminishes, resulting in a sharp drop in the Australian dollar to create a sustainable trade and current account surplus.

Quay has long held the view Australian interest rates are eventually heading to zero—we first wrote about it in 2015. But what happens after that? When households are no longer willing or able to take on more leverage and the government maintains a policy of achieving a balanced budget, the only moving part remaining is the foreign sector reducing its appetite to save in Australian dollars. In order for this to occur, Australia needs to run large sustained trade surpluses. It is almost certain this will require a significantly lower Australian dollar.

The government may eventually change its stance, but it may come too late.

Sectoral balances apply equally to other Western countries around the world. The significant rise in household leverage prior to (and post) the global financial crisis has led to weaker credit growth despite low interest rates.

Chart C shows US sectoral balances. Key is that the advent of the US government surplus led to a decline in domestic savings (particularly household) during the late 1990s. And while the federal deficit increased in the early 2000s, so too did external savings—meaning households continued to run very low aggregate savings, resulting in higher gross leverage. 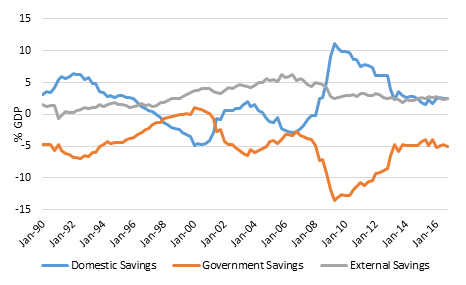 In the aftermath of the GFC, the US government substantially increased its deficit. This resulted in a substantial increase in domestic savings, allowing households and businesses to de-leverage. Recently the fiscal deficit has narrowed, as have domestic savings. Reliance on credit growth has re-emerged, with household debt already surpassing pre-GFC levels (see Chart D). Because of this, it is very difficult to accept the argument there will be any normalising of interest rates in the foreseeable future.

Chart D: Total US debt balance and its composition 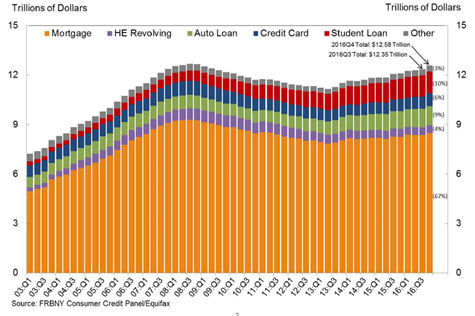 It is for this very reason we have held the view that global interest rates were unlikely to increase by as much as expected. In fact, we wrote a paper in April 2017 warning of the danger of following the reflation trade.

Because governments are always striving to reduce deficits (achieve surpluses) and foreigners tend to prefer savings in Western currencies, there is enormous pressure on the domestic sector to borrow the difference. The result? Extreme levels of private sector debt that is castrating the effectiveness of lower interest rates, but magnifying the financial stresses of higher rates.

As a result, interest rates will likely be lower for longer—not only in Australia, but around the world where private debt levels are high. History will show Japan is not the exception—it’s the rule.

By the time Australia hits ZIRP (zero interest rate policy), the only moving part in the sectoral balances will be the Australian dollar, which will almost certainly be lower. This may not happen soon, but based on the laws of the sectoral balances there is almost no other outcome over the long term (outside a significant government fiscal response).

How does this affect Quay’s investment process?

As discussed in our December 2015 paper, rising interest rates in Australia and the US did not previously act as a headwind for listed real estate performance. On the contrary, as Chart E shows, US real estate in particular significantly outperformed US equities. 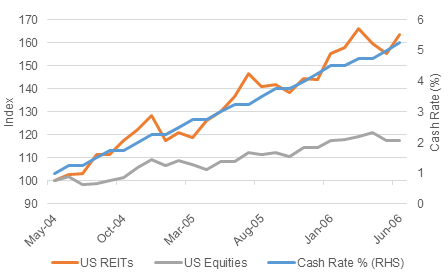 Secondly, a decline in the Australian dollar will improve any unhedged global fund’s total return—but this is illusionary. While it is tempting to cheer a lower currency and higher reported fund returns, the reality is that Australian investors are simultaneously facing an increase in their cost of living (as imported items become more expensive). An unhedged global exposure is really a ‘hedge’ against the potential increase in the cost of living from a lower currency.

We admit our outlook regarding Australia’s macroeconomic headwinds may turn out to be too pessimistic. However, this does not change our approach. We continue to seek the best rent-based real estate investments supported by secular trends, quality management, conservative balance sheets and sustainable dividends. We are confident this will assist us in meeting our investment objective over time.

Appendix A – the derivation of the sectoral balances[2]

The basic aggregate demand equation is:

In terms of the uses that national income (GDP) can be put too, we say:

which says that GDP (income) ultimately comes back to households who consume, save (S) or pay taxes (T) with it once all the distributions are made.

So if we equate these two ideas about the same thing (GDP), we get:

which we then can simplify by cancelling out the C from both sides and re-arranging (shifting things around but still satisfying algebraic rules) into what we call the sectoral balances view of the national accounts. There are three sectoral balances derived – the Budget Deficit (G – T), the Current Account balance (X – M) and the private domestic balance (S – I). These balances are usually expressed as a per cent of GDP but we just keep them in $ values here:

The content contained in this article represents the opinions of the authors. The authors may hold either long or short positions in securities of various companies discussed in the article. The commentary in this article in no way constitutes a solicitation of business or investment advice. It is intended solely as an avenue for the authors to express their personal views on investing and for the entertainment of the reader. In particular, this newsletter is not directed for investment purposes at US persons.

[1] Refer to Appendix A for the mathematical derivation of this relationship.