Are we nearing a tipping point? Topic of the week, month, year and decade. Australian house prices.

It seems everyone has an opinion. When house prices collapsed in the US and parts of Europe during the Great Recession, a veritable cottage industry emerged in Australia predicting similar house price doom. One famous economist even hiked up Mount Kosciuszko after losing a bet on house prices.

Others have shorted Australian banks, betting on an Australian housing crash. Why have people been so wrong for so long?

Most experts use the wrong framework when analysing house prices

The list of house-price 'culprits' is long. Negative gearing, concessional capital gains tax, immigration, very low interest rates and record housing debt. Yet blaming these issues as the cause of recent house price inflation rarely stands up to any real scrutiny.

Negative gearing has been with us for over 40 years – and for the first half of the 1980s there was even ZERO capital gains tax. Yet prices were still considered affordable in the 1980s. In fact, the value of negative gearing (which is equal to the tax shield on the negative yield spread) is lower now than almost any other time in history due to very low borrowing rates. Negative gearing currently provides the lowest benefit for investors versus owner-occupiers relative to history. Meanwhile, owner-occupiers enjoy a significant capital gains tax advantage over investors.

House prices increased at an even greater pace in the late 1980s. That's when mortgage rates were in the double-digits. Low mortgage rates do not explain much either.

Further, Australia has experienced high immigration levels since the second world war. Population growth is not a recent concept. Despite this, prices were still considered affordable 30-40 years ago.

Finally, ever-increasing household debt is a concern. But it has proven to be a poor predictor of house price correction. Household debt / income has been at all-time highs, every year, for the past 30 years.  Could the next 30 years be the same?

The right way to approach the issue

At Quay, we like to define property into two broad buckets; ‘commodity’, and ‘franchise’.

Franchise property has very high barriers to entry. This is either by planning or location constraints. No amount of capital is capable of replicating the asset. We regard the best in-class malls, on-campus student accommodation and manufactured housing as useful examples of franchise property.

Commodity property is easily replicated or substituted at a price. Office property, industrial and storage are good examples. As is residential property.

When thinking about commodity property, it is important to understand replacement cost. When prices are above replacement cost, a profit motive exists to supply the market with new stock. Conversely, when prices are below cost, supply is constrained, and remains so until prices recover. This can occur either by higher rents or lower capitalisation rates.  The result is prices tend to oscillate around replacement cost, which in turn generally increases in line with inflation. The following illustration attempts to make the point. 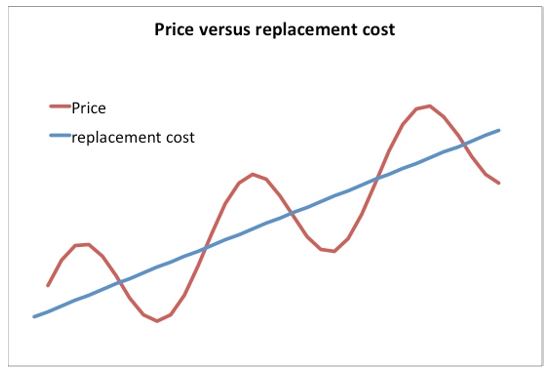 Replacement cost for commercial property is easy to calculate. All it takes is some reading of listed real estate company annual reports and collecting relevant data on projects under construction. It is a little harder for residential property, since there are many price points and locally varying cost structures.

In the midst of the Great Recession, the local pundits got it wrong. That's because there was no obvious surge in supply in 2008, as the following chart demonstrates. In other words, prices were either at or below replacement cost in most markets. This is supported by the fact listed residential developer margins were collapsing. Despite the trauma of the financial crisis in 2008-09, there was not a lot of room for prices to fall. 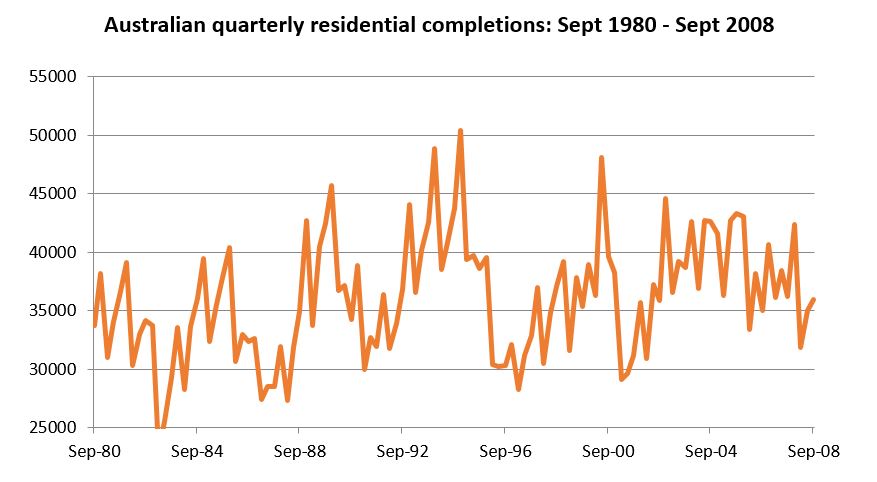 The law of unintended consequences – Part I

Since 2012, the state of play has changed. In response to the fall in business investment (mainly mining), the Reserve Bank of Australia (RBA) sought to stimulate the economy by lowering interest rates. The strategy succeeded, as residential investment replaced business investment. First, by significantly increasing residential prices in the secondary market (existing houses). Second, by pushing prices way above replacement cost and encouraging a supply response, as the following chart demonstrates.

We make three observations from the above chart:

It’s hard to ignore the parallels between today’s Australian residential market and the US housing market of 2006. We make two observations on these similarities.

There were many reasons for the US housing bust of 2007-2009.  This paper does not try to identify each and every one of those reasons.  However, the 2006 construction boom was clear evidence prices were above the marginal cost of production. This meant the market was overvalued - some type of correction was inevitable.

Valuations in Australia are clearly stretched. We believe there is risk that some type of price correction is inevitable. However, market timing is difficult. In the US, the rise in default rates was the catalyst. However, we don’t think the same dynamic will occur in Australia.  In our view, lending standards in Australia have been much better than the USA circa 2005.  So, what will be the catalyst in Australia?

The incredible surge in house prices since 2012 has caught the attention of just about every pundit in Australia.  Naturally, politicians are now attempting to formulate a policy to make housing more affordable.  Politicians playing with policy leads to “policy risk” for house prices, which may temper buyer enthusiasm.

Since 2012, as prices pushed above replacement cost, housing approvals across the country have subsequently increased.  A vast majority of this increase has been concentrated in Sydney, Melbourne and Brisbane.  This increase in approvals eventually converts into new supply.

According to the Australian Bureau of Statistics, it takes between 11-18 weeks to convert a dwelling approval to a dwelling start [1].  Once dwelling construction starts, average completion time is approximately 32 weeks for houses, but longer for Apartments.[2]

Adding approval and construction time, it should take around 12 months for approvals to convert into completions (longer for apartments, shorter for houses).  This is supported by the data in the chart below, which matches approvals, lagged 12 months, with dwelling completions. 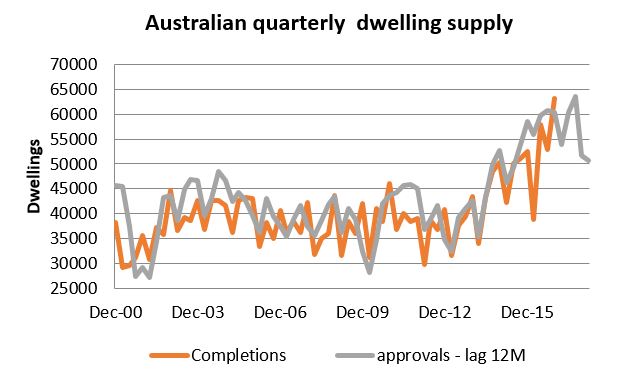 Despite the recent decline, approvals still remain well above the long-term average. Why wouldn’t they given the profit incentives? However, the concerning aspect of the chart is what’s to come. Despite a sharp increase in completions since 2015, we can still expect approximately 55,000 additional dwelling completions per quarter for at least the next four quarters, or 220,000 over 12 months.  This data is consistent with the ABS series “Dwelling units under construction” which was 219,000 as at December 2016.[3]

As new supply surges into the market, bank regulators and the RBA are seeking to cool the residential market. For the past few years, so called ‘macroprudential’ tools have been implemented to address the risks of future financial instability.  This includes placing a growth limit on investor loans to less than 10% per annum (A$55bn), and reducing ‘interest only loans’.

These measures could not come at a worse time, despite being for the purposes of financial stability and the overall health of the housing market.

Based on the estimated 220,000 dwelling completions expected in 2017, around $176bn is required to settle the new supply, assuming an average settlement price of $800,000 per dwelling. Allowing for deposits and some ‘all-cash’ settlements, the final credit requirement could be as much as $150bn.  There are two problems with this.

Firstly, at least 50% of these settlements ($75bn) are likely to be investors and/or foreign buyers[4].  This will require the banking system to exceed the regulator’s 10% threshold limit, and unravels most of the effort to contain investor credit growth since 2015.  The following chart puts this financing requirement into context. 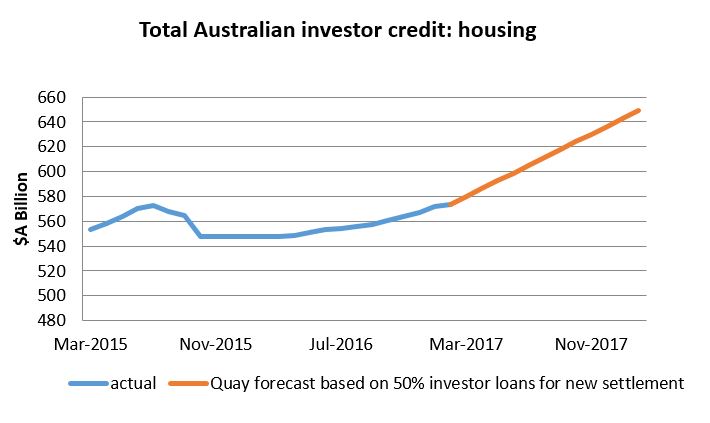 Secondly, even without regulatory pressure, some banks are already ‘blacklisting’ certain postcodes from additional lending due to concerns including concentration risk and elevated levels of supply.[5]

We believe there is an emerging risk that as new supply is completed, some banks may balk at financing the settlement. This is either by choice or regulatory pressure. Any lending restrictions may create significant disruption and confidence across the residential market.  The delay or failure for some dwellings to settle may force developers to discount unsold stock to clear balance sheets. This would put downward pressure on values further restricting bank lending.  Non-settlement of new supply may be Australia’s version of ‘rising default rates’.  It is a space worth monitoring.

The analogy we like to use is that a snake has swallowed a football, and while regulators may believe stitching the snake’s rectum will solve the problem, it will in fact make it worse.

Are we too pessimistic?

The banks may simply ignore the regulators and push though additional credit to ensure settlement, thereby converting developer debt to residential mortgages.  Perhaps cash sales are greater than we expect, or non-bank lenders will step in and fill the void (although non-banks ultimately get funding from the major banks).  If so, the problem may be delayed.  As long as prices remain materially above replacement cost, new supply will continue. Another c$150bn of settlements will be required for 2018.[6]

But a delay does not solve the problem that can be summarised as:

How does this affect Quay’s investment approach?

The advantage of an unconstrained global investment approach means we’re not encouraged or required to own Australian REITs.  We are certainly not required to own large A-REITs with residential exposures, and we don’t.

If a housing correction does occur, the downside will not be limited to the residential developers. Housing construction will collapse and the economy will slow. Local office REITs will suffer as banks react to an economic recession by cutting staff, and therefore office requirements (which will hit Sydney office particularly hard).  Local industrial property will suffer too, as business investment contracts.  This is likely to place pressure on the AUD, as the central bank reacts by cutting interest rates. These events will benefit any unhedged global investment strategy.

Being index unconstrained and currency unhedged provides the Quay Global Real Estate Fund maximum flexibility to preserve capital and profit from major real estate ‘event’.  The Fund is well positioned to protect investor purchasing power for any precipitous fall in the AUD, and completely avoid the fall out of a local residential price correction.

We are well-aware of the well-trodden path of local property bust predictions.  It has very much become the local ‘widow trade’.  However, we believe the risks are building, and the limits being imposed on new investor borrowing at a time of record new housing deliveries may turn out to be the tipping point.  We will watch this space closely.

One irrefutable takeaway point: it is not the time to have all of one’s eggs in the same ‘economic basket’.

[4] Around 48% of all housing finance commitments for the March quarter were for investors (Source: Corelogic).  This includes existing stock. We would expect new developments would attract greater investor interest due to the attractive depreciation associated with new builds.  Hence 50% could be a conservative estimate.