Investment Perspectives: Don't judge a property by its building

Not long after my daughter turned five I took her to see her first movie, “Up”. It’s about an elderly man who, along with an unexpected young friend, tries to re-capture his youthful passion for adventure.

It was a great movie, with many positive messages. And for me, naturally there was also a message about real estate. This part of the movie particularly caught my attention. 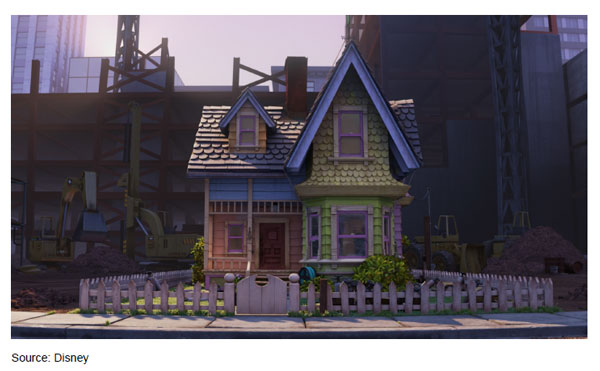 I’m sure for the majority of viewers the above image conveys the idea of greedy developers (is there any other kind?) trying to bully an old man out of his beautiful home – a home he and his recently-deceased wife had shared their entire life together.

But there is a real estate message here too. The developers were offering anything they could to convince the old man to sell. Why? The house itself had no real value for the developers (but enormous value to the old man) – no, the property was valuable because the house sat on valuable land.

When the old man initially purchased the home, it was rundown and located in a neighbourhood of no particular note. But with the passage of time, and the benefit of demographics, this once simple home became very desirable (high quality) real estate.

It’s all about the land

Back in 1998, I was fortunate to have the opportunity to meet Milton Cooper, the founder and executive chairman of Kimco Realty – one of the first of the new listed REITs in the United States. At the time I was a young sell-side research analyst and had been covering real estate for seven or so years. There was no fixed agenda for the meeting – it was simply an opportunity to chat about Mr Cooper’s real estate philosophy.

One aspect of the conversation, however, stands out as a lasting memory. The idea, according to Mr Cooper, was that land is where investors generate growth and eventually their total return. The problem is that by itself, land is hard to finance and therefore difficult to hold for a period of time. Improvements are a necessary way of earning income, which allows the land to be financed and held for a long period of time. Ultimately, however, the improvements are cost of ownership via economic depreciation.

Ten years later, “Up” only helped to reinforce this idea.

The trick, it seems, is to identify very high quality land with a very low build cost (or at least a low cost to maintain), and generate enough current income that can attract appropriate finance (debt and equity).

Most investors see the property on the left as very high quality: a prominent, well-located asset, with an institutional quality tenant roster and located in one of the most economically important cities in the world. It would also look great on an investment brochure.

At Quay, we believe an argument can be made that the property on the right is of higher investment quality. Why?

So the idea is simple enough, right? We just need to find storage facilities in major cities at a cheap price.

Sadly, that’s easier said than done. But there are other strategies that can take advantage of Mr Cooper’s incredibly valuable insight – that is, to identify real estate where the maintenance capital expenditure (what we call “stay in business CAPEX”) is low.

One of the great inefficiencies in real estate valuation (of which there are many) is the application of a capitalisation rate (multiple) to pre-tax, and pre-depreciation property income. And while we accept that at times valuation multiples try to encapsulate ongoing depreciation, the approach tends to be blunt and sometimes clumsy. Applying a more quantitative approach, we believe, leads to better investment decisions.

The following chart demonstrates how this inefficiency has played out over time. US REITs operating in sectors with high ongoing CAPEX (Hotels, Industrial, Office, Retail) have historically generated lower total returns versus sectors with low CAPEX. For long-term investors, we believe these inefficiencies continue to exist. 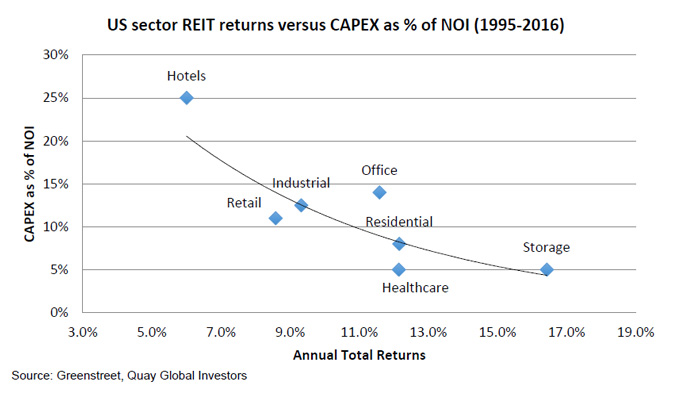 So while some sectors may not look pretty for the purposes of a glossy brochure (e.g. Storage, Manufactured Homes, Healthcare), they have a powerful investment advantage: low ongoing CAPEX means more free cash for dividends and re-investment. For Quay, that means higher quality real estate.

How does this affect Quay’s investment approach?

Quay Global Investors began in 2013, and we launched our Fund in 2014. However, the experience and lessons earned and learned began more than two decades prior. These lessons led to us taking a different approach to defining asset quality, which includes:

To us, asset quality is more than just an attractive building. It’s about attractive total returns.