Demographics really matter! The study of populations, how and where people move, is integral to real estate. Very little can stop the effect of demographics on the economy – it is the slow-moving beast that influences demand and thus resource allocation.

At Quay, we keep a close eye on demographic changes across the world to find new trends to exploit – or to confirm existing ones. We’ve previously written about demographics, and recent updates from the US Census bureau have given cause for us to revisit some of our key investment assumptions. Using demography to inform investing can be likened to sailing; all vessels may take advantage of trade winds, but the best sailors plan around specific weather systems in conjunction with those prevailing winds. As investors, we look to always have the wind behind us.

Demographics is a broad topic. This article looks at two different scenarios: the impact of population growth in Australia; and the demographics supporting US student accommodation and housing.

Much has been written about the current Australian macroeconomic retail environment. Weak wages, price deflation and households saddled with debt currently weigh on consumer sentiment and hence retail sales. For bricks and mortar retail, we can add the uncertainty of rising ecommerce – and the traditional domestic retail environment appears grim.

But what of the longer term? This is where demographics and population projections become far more important for investors.

Australia’s population growth rate is expected to slow from current levels, but according to the Australian Bureau of Statistics will still average 1.5% over the next 10 years (Figure 1). Consequently, Australia still has some of the best population forecast growth rates in the developed world. 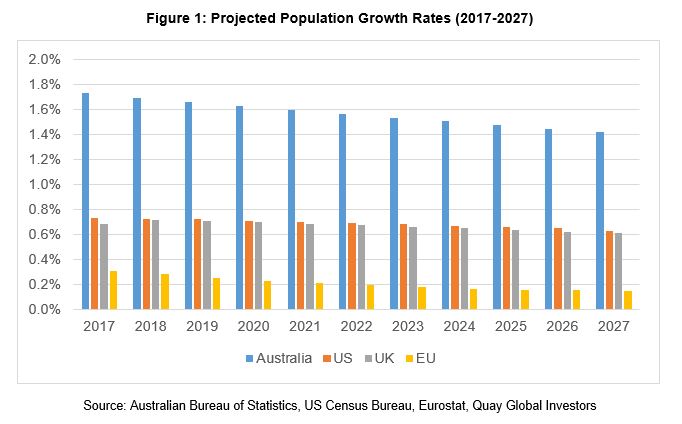 This shouldn’t be underestimated, especially when it comes to retail. Further, fear about the demise of physical retail may be overdone, especially for ‘best in class’ assets.

The ABS releases ‘experimental’ online retail estimates, which break down domestic online retail sales between ‘pure-play’ (online only) and ‘multi-channel’ (online and physical store). The real threat to bricks and mortar is pure-play, as multi-channel almost always involves the use of physical real estate to facilitate a transaction.

However, the estimates show that multi-channel makes up the vast majority of online sales in Australia and is increasing (Figure 2). 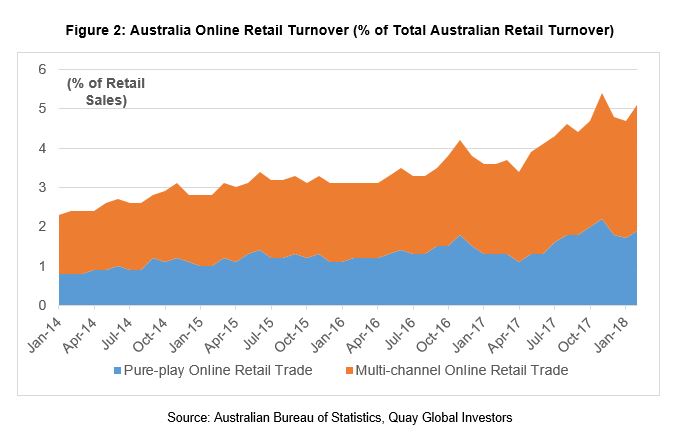 Despite the hype, total pure online retail sales (not dependent on physical stores) is just 2% of total sales. But with the arrival of Amazon, it will grow – and it will likely grow quickly.

What is not often discussed is that the retail pie will also grow – not as quickly, but from a much larger base. This is fuelled by population growth, general improvements in productivity, and price.

Over the long term, total retail sales have a history of tracking nominal GDP growth (Figure 3) and have averaged 4% p.a. since 2004. 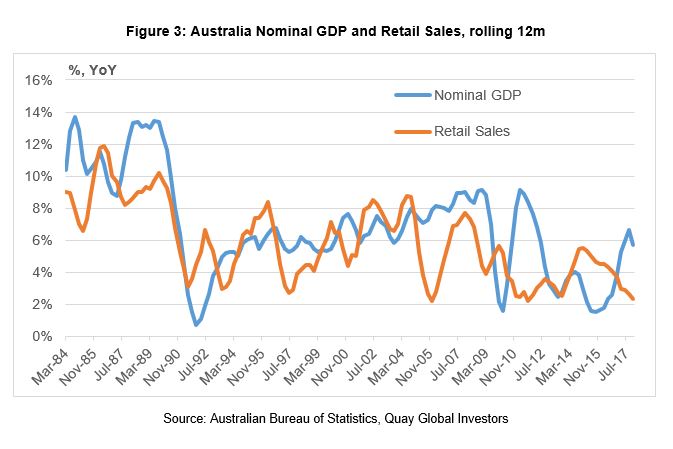 If we assume productivity growth of 1% (below the long-term historic average), population growth of 1.5% as per ABS forecasts and inflation of 2%, it is feasible to forecast retail sales increasing at around 4.5% over the long term (Figure 4), notwithstanding the current retail malaise. 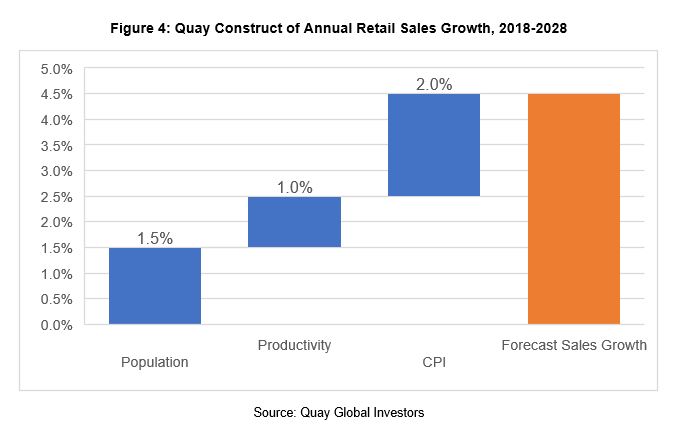 The compounding effect of such growth should not be underestimated. Applying this logic to current retail sales, over the next 10 years sales could grow by almost $200 billion from today’s starting point of $320 billion (or +$500 billion in total to 2028).

The inference here is there is plenty of retail sales growth to cater for both online penetration and bricks and mortar growth.

For example, if we assume ‘pure’ online penetration reaches 20% of total sales (which is aggressive since it currently represents just 2%), around $100 billion of total retail sales will eventually occur online. This still leaves a substantial +$80 billion of additional sales through non ‘pure’ online whose business model relies on a physical bricks and mortar presence.

Taking this analysis one step further, we expect – as has occurred in the US and UK – that the biggest losers from online retail penetration will be second tier malls (shopping centres), meaning assets best positioned to capture the vast majority of this incremental $80 billion will be best-in-class malls that have more foot traffic and are able to best adapt to the changing retail environment.

That’s substantial growth, considering today the top 20 malls in Australia account for less than $20 billion in retail sales (or 6.5% of total sales).

If an investor is forming a view on Australian retail and ignoring the demographics, they are doing it wrong.

Step up, young and old – demographic impacts on real estate

Granularity can be revealing. Under smooth population projections are some substantial changes in specific age cohorts that will have big implications on different real estate sectors. 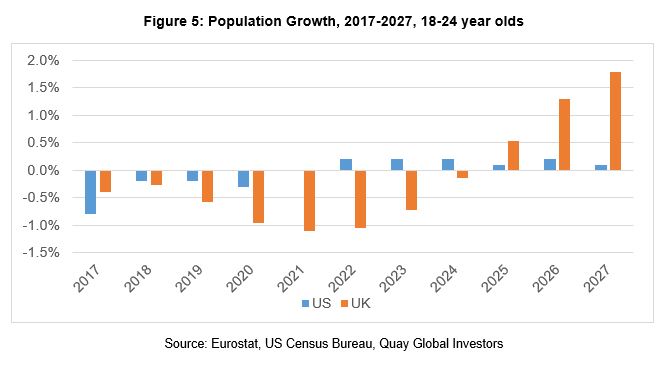 There is an argument that demand for student accommodation will moderate due to demographic factors, and Figure 5 shows the number of 18-24 year olds in the US over the next 10 years superficially supports this argument. Yet while the population projections for the college-age population do appear as a headwind for enrolments, not every 18-24 year old goes to university. We know that college enrolment as a percentage of the 18-24 population in the US has been increasing since 1970 because higher education attainment is critical for future income and earnings potential for graduates.

Combining projected population growth rates with enrolment projections from the US National Center for Education Statistics (Figure 6), we can forecast that the enrolment rate of 18-24 year olds is likely to increase to 46.5% by 2026, up from 41.2% in 2016 (Figure 7).

Why? Well, according to the Pew Research Centre: “On virtually every measure of economic well-being and career attainment—from personal earnings to job satisfaction to the share employed full time—young college graduates are outperforming their peers with less education. And when today’s young adults are compared with previous generations, the disparity in economic outcomes between college graduates and those with a high school diploma or less formal schooling has never been greater in the modern era". 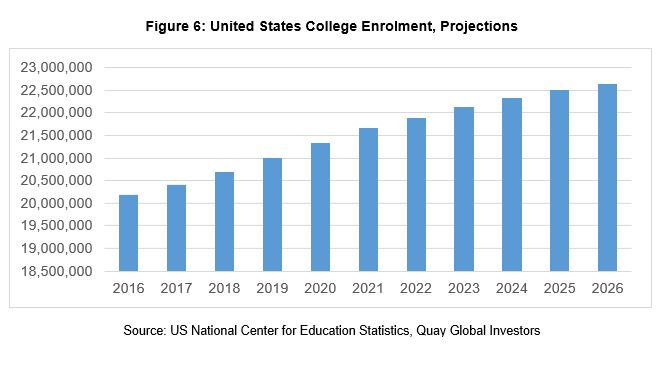 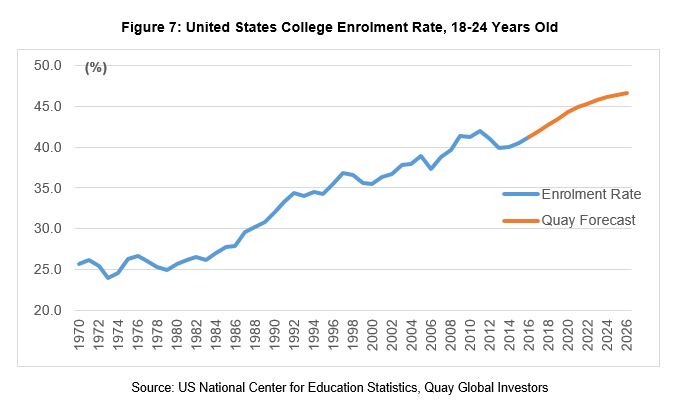 In light of this, the long-term outlook for student accommodation in the United States still looks positive. Two of our investees dominate the US student accommodation market, benefiting from a large renewal pipeline (redeveloping the old dorms and frat houses the baby boomers occupied in the 1960s) and gaining greater market share in the high barrier to entry ‘on-campus’ market.

In the UK, there is a rapidly growing cohort of young people just about to begin high school, who will be of university age in six years’ time. On top of growth in overseas students, this will act as a further tailwind for UK student accommodation providers.

Known as the ‘echo boomers’ or ‘Gen Y’, the 25-34 age cohort graduated within the past 10 years and are establishing their careers and enjoying life. It is also the largest age group cohort in the US (surpassing the boomers, as in Figure 8), and 6 out of 10 of them choose to rent over buying. 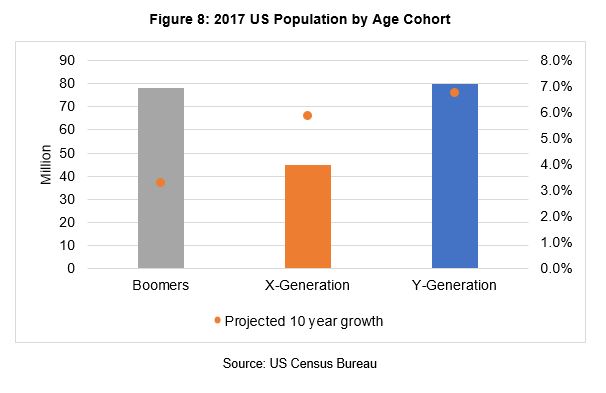 This cohort will grow through to 2024 in both the US and UK, as shown in Figure 9. 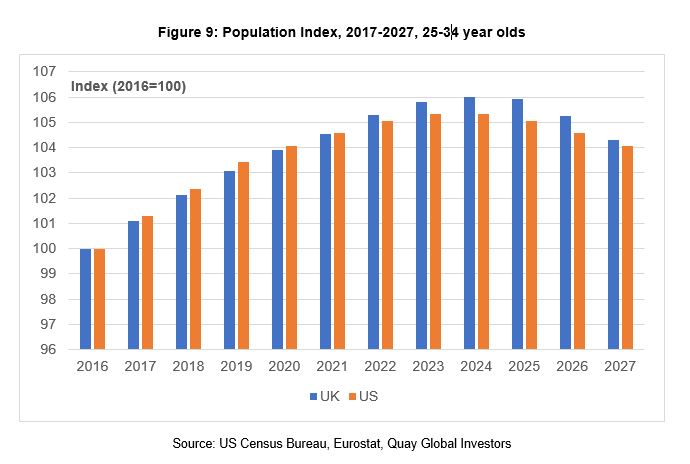 They will also continue to drive demand for multifamily and single rental housing.

Interestingly, adults that choose to rent are three times more likely to use local storage facilities compared to home owners – presumably because they are labour mobile. This is also supportive for storage demand.

What makes Gen Y different to generations past, as some of our readers personally endure or enjoy, is that they’re choosing to remain at home for longer – likely due to high levels of student debt and the cost of owning a home (Figure 10). 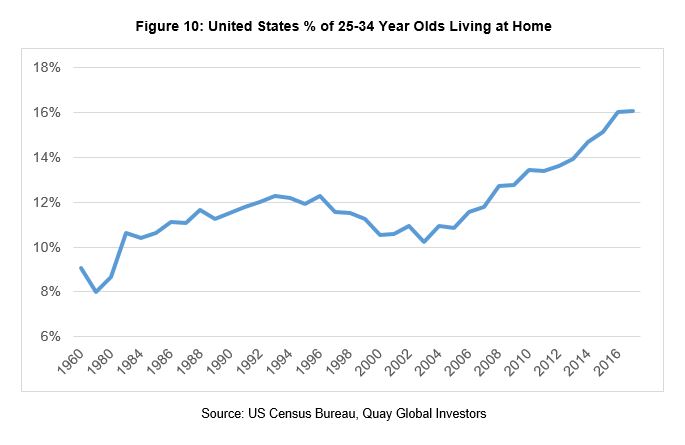 We believe this represents pent-up demand for multifamily and storage. Eventually this group will leave home, and (saddled with student debt) are likely to rent. And if they do, and the ‘living at home’ ratio moves back to the long-term average of 10-12%, two million Americans will need a home – supporting demand for an additional one million new dwellings over and above the current demand from the growing population.

While multifamily has been a Gen Y story in the ‘Anglosphere’, Germany has the legacy of being a renter’s society and therefore multifamily demand comes from all working age cohorts and from an early age. We still see demographic tailwinds for multifamily demand in Germany over the next 10 years, especially if immigration levels continue (Figure 11).

When investing, it is all too easy to get caught up in the day-to-day noise. Filtering out this noise can create attractive investment opportunities for those willing to take the long view.

Australian population growth – which is higher than most of the developed world – will continue to benefit nominal GDP. The ‘magic of compounding growth’ leaves room for bricks-and-mortar retail sales to still grow meaningfully, even after factoring in a significant rise in online retail penetration (that may or may not meet the giddy expectations of online retail advocates).

As the ‘echo boomers’ in the United States are establishing their careers and households, we can still see increased demand for multifamily and storage units. Other social and economic factors like higher university enrolments, high levels of student debt and stay-at-home kids also impact this.

As a general comment, it is easy to get absorbed in these charts and begin to believe that a changing trend translates into investment returns. However, while we look at demographics closely, it is not the sole determinant of returns. Our research process aims to identify companies that offer the most compelling risk-adjusted returns, and common contributors include the real estate supply outlook in the specific markets in which our investees operate; and macroeconomic and social factors affecting demand, management quality, asset quality and various other factors.

But this slow-moving beast moves inexorably towards economic change and can’t be ignored. For long-term real estate investors, demographics do matter.