Last month, we published a paper of the 10 most interesting charts right now. One chart, which suggested the Federal Reserve does not influence long-term stock market returns, garnered the most attention.

Last month, we published a paper of the 10 most interesting charts right now.

One chart, which suggested the Federal Reserve does not influence long-term stock market returns, garnered the most attention. 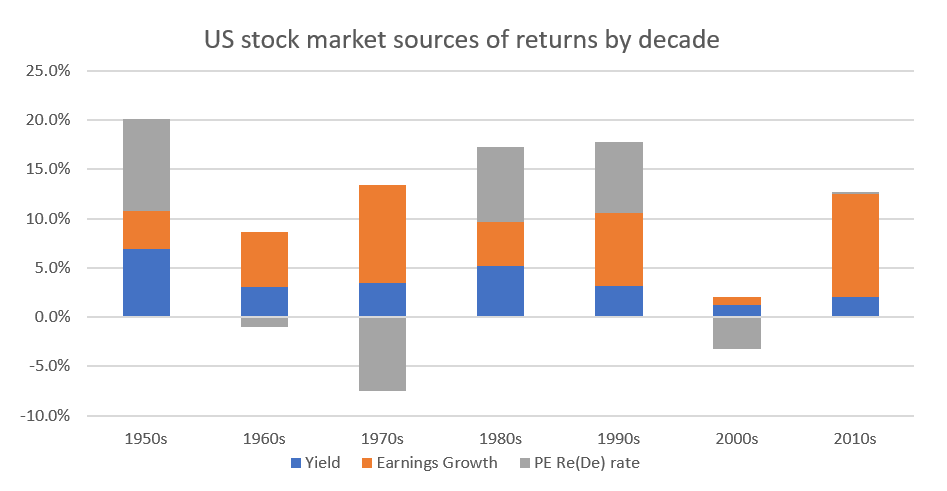 The chart (and our observation) runs at odds with much of the mainstream financial commentary that suggests central banks are flooding the ‘system’ with liquidity, which in turn drives up stock prices.

So this month we thought we would dig into the concept of liquidity a little deeper, and see whether we can establish why central bank actions don’t explain share market performance.

Broadly speaking, there are three types of liquidity in financial markets:

All three types of liquidity are very different – and the central bank can (generally) only influence one of these.

In Australia, banks hold cash at the central bank (RBA). This cash is called ‘exchange settlement balances’, and is required so banks can settle transactions on behalf of customers. For example, when Merchant A transacts with Merchant B, the funds (represented by the exchange settlement balances) transfer from Merchant A’s bank account at the RBA to Merchant B’s. The shift in cash at the RBA (which is an asset for the banks) matches the shift in liabilities, reflecting customer funds / deposits.[1]

What is not widely understood is that exchange settlement balances (commonly called ‘reserves’ in the US) are not a pre-requisite for lending. That is, bank funds sitting in a central bank are not ‘lent out’ to the public as per the money multiplier. In reality, a new commercial or residential loan simultaneously creates a new deposit. Over time, as bank balance sheets expand, the need for more reserves increases. However, central banks are happy to supply these whenever required so as to maintain a targeted interbank interest rate.

In fact, exchange settlement balances (or reserves) are not fungible with the money that households and businesses use every day. Central bank cash is held in a closed system, for the purposes of settlement between banks. Or, said another way, if one could withdraw reserves from a central bank it would not be able to buy a stick of gum, let alone shares.

Details on this process are outlined in an excellent paper published by S&P in 2013, or the Bank of England has a good video representation.

Commercial liquidity deals with access to funds for businesses and households for everyday use. This liquidity comes in the form of ordinary bank accounts across the banking system, and access to credit (business loans, home loans, credit cards, etc).

As discussed above, loans are created via double-entry bookkeeping at the banks. The new loans create new liquidity (a flow item) which adds to existing liquidity (a stock item).

Importantly, this liquidity is created outside the scope of central banking operations. Although such liquidity is extremely important for households and businesses to meet daily expenses and obligations, new loans are 100% reliant on the commercial credit process. Central banks cannot force banks to lend, or customers to borrow.

So, private sector loans are not about bank reserves or the money multiplier. Bank credit is only ever about risk appetite: whether the bank has appetite to originate a new loan, and whether the borrower has the desire for new credit. That’s it.

How often have we heard the phrase “there is a lot of cash sitting on the sidelines”?

The statement is used to suggest that a particular market is under-bought, and on the cusp of increasing just as soon as those silly investors ‘break’ and put their cash in the market.

But in reality, there is always cash sitting on the sidelines. Whenever a stock is bought on market, it is simultaneously sold. Upon settlement, cash is transferred from the buyer’s bank account to the seller’s. As such, the stock of cash on the sidelines is unchanged – just like replacing one player on the football field with another.

More broadly, investment market liquidity (the ease at which investors can enter or exit a financial position) is not determined by cash on the sidelines, but via risk appetite. As risk appetite increases, the bid-ask spread on most financial assets narrows and transactions occur with relative ease. As risk appetite falls, the amount of cash ‘on the sidelines’ does not change, but bid-ask spreads will widen as investors become fearful and transactions become more difficult to execute.

When official cash rates are at or near zero, the focus turns to asset purchases.

What is not always well understood is the very poor transmission mechanism between asset purchases and the real economy, or even the financial markets.

When a central bank acquires a high-quality bond (say a Government bond) from a bank, the transaction results in:

As discussed above, more exchange settlement balances at a bank does not help the real economy, since:

The main argument for asset purchases (especially Government bonds) is that it lowers the yield on the targeted bond, thereby lowering the cost of borrowing and stimulating the economy. But even that argument is tenuous at best.

As the chart below highlights, the QE efforts by the Fed last decade actually increased bond yields. Only after QE ended did bond yields fall. 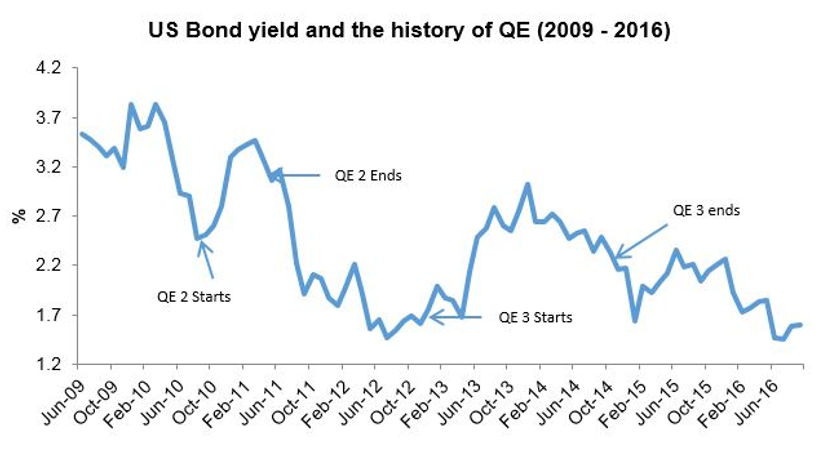 Of course, central banks can also acquire high quality bonds from non-banks. This process removes the high quality bond from the private sector, increases reserves at the customer’s bank, and results in crediting the seller’s account at the same bank. This does increase private sector deposits in the banking system (and liquidity). However, one must draw a long bow to argue owners of bonds are happy to switch from low yielding low risk asset to equity.

This time it’s a little different

Due to the unprecedented economic impact of COVID-19, central banks have taken the unusual step of purchasing not only Government bonds, but other forms of credit, including sub-investment grade credit.

This policy still requires banks to extend/create new loans to businesses (the loan creating the deposit), but with the knowledge that the Fed is a backstop if the bank wishes to syndicate the loan. As an ex-banker, I’m sure this makes the credit committee meetings within banks a tad easier compared to the post-GFC world.

But these new loans are usually for the purpose of rolling over existing debt or new facilities needed to meet household and business obligations. They are not used for overall share market speculation.

When thinking about liquidity, it is not surprising the US Federal reserve had so little impact on the share market performance from 2010 to 2020. Returns were almost entirely derived from earning growth and dividend yield.

The argument “liquidity is what drives the market” is hard to prosecute.

Cash (existing liquidity) is always on the sidelines, and loans (new liquidity) are created independent of central bank action, based on bank risk appetite and borrower desire.

That leaves bank system liquidity, which is in the form of exchange settlement balances and not fungible with transitional money – it’s constrained within a closed banking system and its only use is to clear bank customer transactions.

So, the next time someone tells you liquidity is driving the market, make sure to ask what type of liquidity they are referring to, and what specifically is the transmission mechanism.

At Quay, we think it best to focus on stocks rather than the commentary regarding central bank actions. As the chart above suggests, long-term returns are driven from initial dividend yields and long-term earnings growth.

To receive CPD points for reading, view this article on AdviserVoice’s website and complete the questionnaire.