Investment Perspectives: 30 years of investment lessons from Japan, and the implications for real estate

Imagine a person of prime working age (~40 years old) seeking investment advice for long-term financial security, and ultimately, a comfortable retirement. The potential investment advice may look something like this:

Imagine a person of prime working age (~40 years old) seeking investment advice for long-term financial security, and ultimately, a comfortable retirement. The potential investment advice may look something like this:

Now imagine it’s a 40-year-old Japanese worker and the year is 1989. Today, at the age of 70, here is the performance of their capital (excluding dividends). 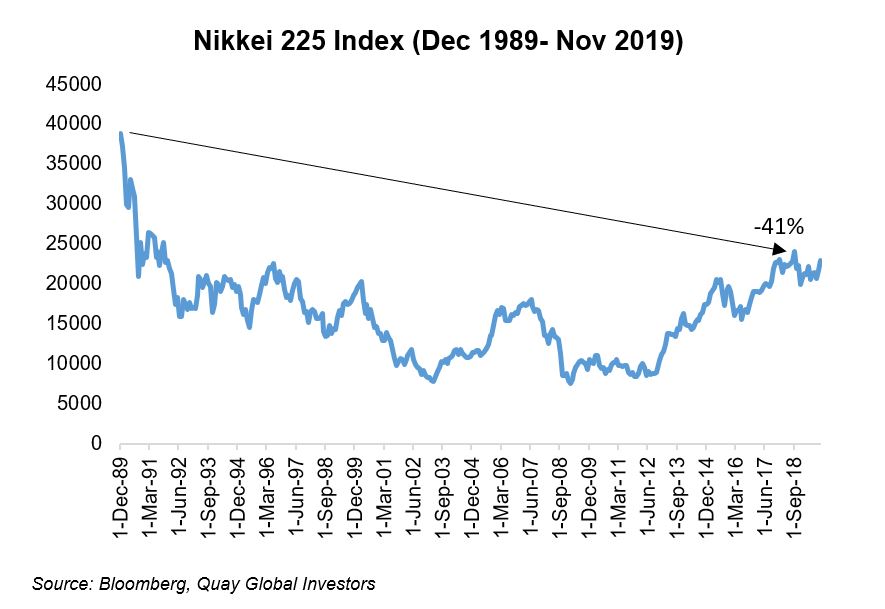 So, what went wrong?

This month marks the 30-year anniversary of the peak in the Nikkei index at ~39,000 points. Up until 1989 returns were very strong, and in hindsight reflected extreme bubble-like valuations. So maybe that is part of the story.

While we are no experts in Japanese equities, we think there are some important macro observations and conclusions to be drawn from the Japanese experience – lessons that frame our approach to global real estate, and why we are not tempted to allocate to this region despite recent strong returns.

Lesson 1: Low interest rates may not be the economic panacea many believe

In financial market terms, 2019 may be remembered as the great pivot in interest rate expectations – from the consensus that global interest rates were increasing (especially in the US), to a ‘lower for longer’ narrative. It does not feel unreasonable to suggest this lower interest rate expectation has supported equity valuations. We have seen some argue that “once you take into account a US bond yield of just 2%, we can justify much higher PE ratios and or valuations”[1],[2] – the theory being the net present value of future cashflows are higher because the discount rate is lower.

Japan moved to zero interest rate policy in 1995. Why didn’t it work?

We think part of the reason is that sustained low interest rates re-anchor corporate expectations for return on capital, which in turn has major implications for long-term profits and cashflows.

What does that mean?

Total development yields are significantly lower today because the lower return relative to today’s cost of capital is still attractive. This does not just occur in real estate, but across all industries. We are pretty certain no Australian company today is using a risk-free rate of 10% to justify new capital spending.

Here is what sustained low interest rates did for return on capital in Corporate Japan. 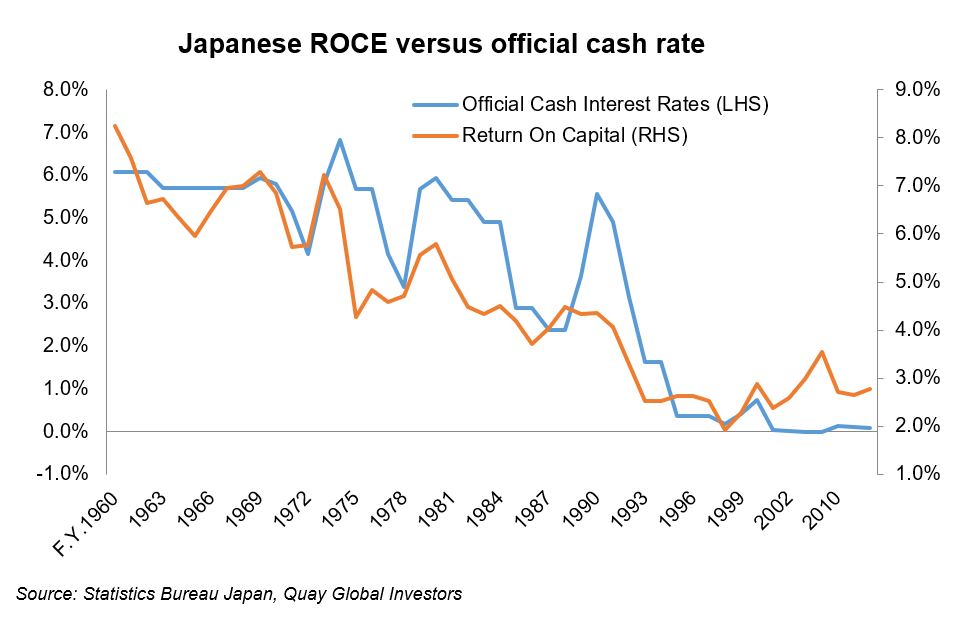 So, while lower interest rates help ‘Net Present Value’ calculations by lowering the denominator, care needs to be taken that there is no equivalent or greater negative impact on the long-term cashflows (the numerator).

As return on capital collapsed across Japan, the result fed through to corporate profits and ultimately share market performance. The following chart traces the weighted average Nikkei earnings per share (EPS) from 1989 -2011. 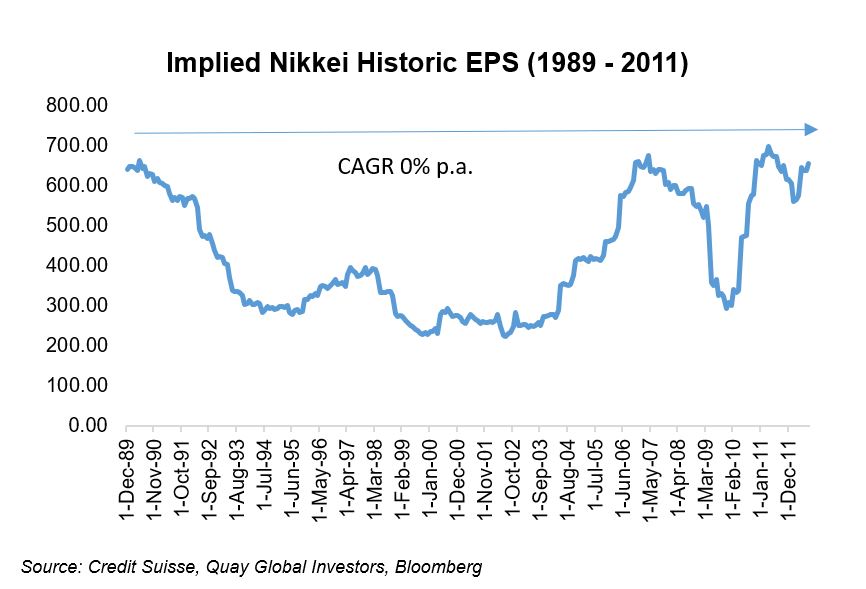 Last month we published a paper Aussie QE may be coming, but it will probably do nothing.

We were surprised to receive some feedback upholding the belief that QE supports assets prices, creating a wealth effect with a knock-on effect to the real economy. After almost 19 years of QE, Japan provides a solid counter-argument to this story. The EPS chart for the Nikkei goes a long way to explaining its poor share market performance. Ultimately, earnings matter.

In short, don’t rely on QE to support the economy or asset returns.

Regular readers of our research will know that when investing, we place significant weight on long-run demographics. Depending on the cohort, more people = more demand for houses, shopping, office space.

Interestingly, the demographic story in Japan has been positive in recent years – although in our view it’s unsustainable.

Back in 2014 (when we launched the Quay Global Real Estate Fund), it appeared the total Japanese labour force had peaked in 1995 at 68m people. Up until 2014, this number fell consistently to 66m people and the outlook was grim. However, since 2014 there has been a surge in the labour force from 64m to almost 69m. The following charts tell the story.

Employment gains and increased worker participation has resulted in a Japanese unemployment rate of just 2.4% (with very little sign of wages growth or inflation).

Interestingly, the surge in worker participation and employment coincided with a lift in EPS for the Nikkei 225 Index. In simple terms, more inputs (workers) equals more outputs (profits, wages). 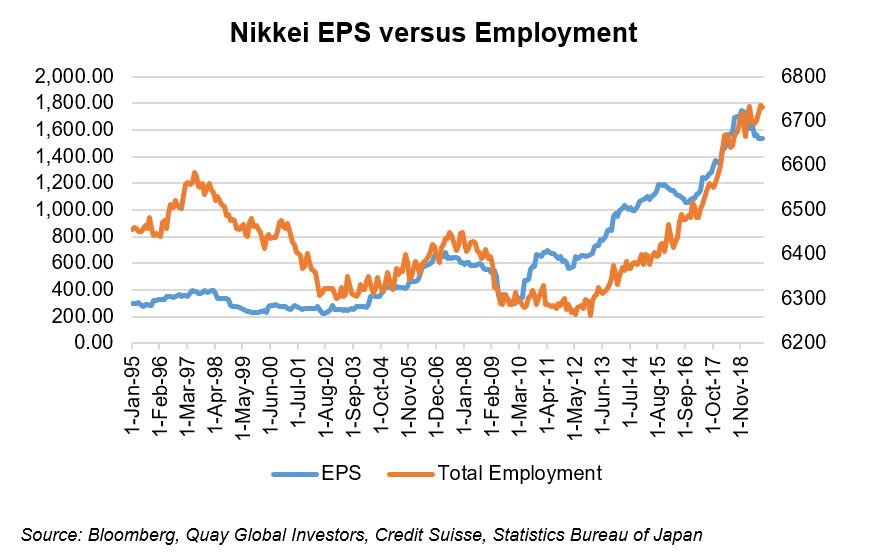 The surge in new workers entering the workforce has also been extremely supportive of real estate fundamentals – particularly in the office sector. For example, the vacancy rate for offices in central Tokyo (five business districts) is currently at a 29-year low[3]. A good real estate story, right?

We are not so convinced.

The fact is, the population of Japan is falling. According to the National Institute of Population and Social Security Research, low birth rates and a reluctance to embrace immigration may see the population fall from 127m to 100m by 2049[4]. The recent surge in employment is simply draining from the relatively small pool of young able-bodied workers. Without a change in the long-run population outlook, total labour supply in Japan is uniquely finite. 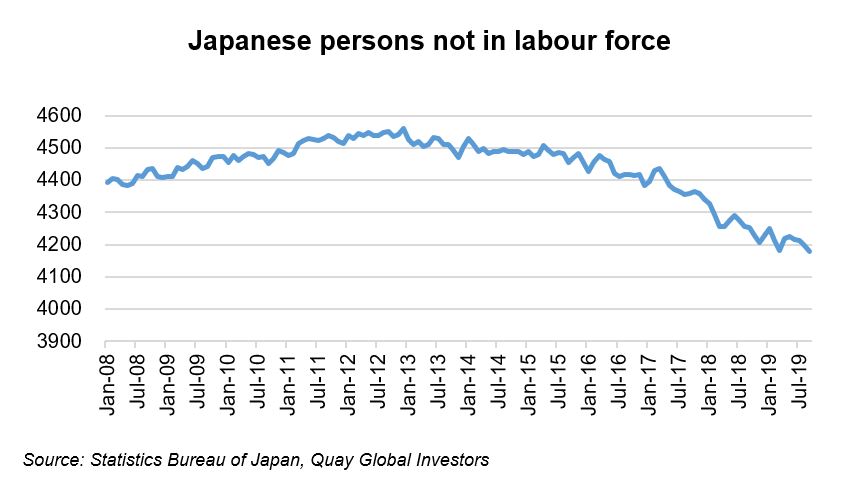 While there has been a surge of new office workers in the economy, driving down office vacancy (and driving up rents), we are concerned this trend is somewhat unsustainable, and will ultimately reverse. And when it does, it will be very difficult to un-build buildings.

Lesson 4: An investment strategy overweight the domestic economy is risky

While a heavy domestic investment bias (equities or real estate) feels familiar and therefore safe, it falls into the trap of “putting your eggs in one basket”. Using our example of the 40-year-old Japanese worker, it is clear their wealth would have been better protected with a global investment strategy.

Lesson 5: Low-cost index funds may not be the best choice in a long-run bear market

While there has been increased interest in low-cost index funds over the years (championed by the likes of Warren Buffett), in the case of Japan one could still have a domestic-heavy strategy and do well – if they backed a successful active manager.

The argument for a low-cost index fund relies heavily on the notion that past good index performance is reflective of future good index performance (and therefore so long as you get competitive market returns, aim for the lowest fee). In the case of Japan, relying on past returns in 1989 was clearly a mistake.

The idea that low interest rates and QE support asset prices sounds intuitively correct (i.e. “money printing”), but is not widely supported by observation or the operational realities of monetary policy.

Investors cheering the ‘lower for longer’ narrative need to be wary of the long-term implication of central bank actions. The lessons from Japan seem clear.

At Quay, we remain committed to being long-term investors. And while the recent surge in the Japanese labour force has been positive for real estate fundamentals, we question the long-term sustainability of these recent events. Since our fund launched in 2014 we have never invested in Japan, and unless there is a meaningful opportunity in the area benefiting from the aging demographic, we are in no rush to enter the market at this stage.

For other investors, the message is clear: be careful being overly bullish in a ‘lower for longer’ world. History is not on your side.