Investment Perspectives: Aussie QE may be coming, but it will probably do nothing

As Australian interest rates head toward zero, many market commentators are now speculating that the central bank will be forced to adopt “unconventional measures” to support the economy, including Quantitative Easing.

It’s not entirely clear what this will look like – but based on our understanding of the monetary system, it is almost certain that an ‘Aussie QE’ will do nothing.

Over the past 18 months, the Reserve Bank of Australia (RBA) has changed tack from “the next move in interest rates is up” [1] to a dovish bias. So much so, that this year they have cut the official cash rate from 1.5% to 0.75% (at the time of writing), with potentially more to come.

As Australian interest rates head toward zero (a policy we predicted back in 2015), many market commentators are now speculating that the central bank will be forced to adopt “unconventional measures” to support the economy. This may include Quantitative Easing (QE).[2]

QE can come in different forms, so if the RBA does follow this path it’s not entirely clear what it will look like. However, based on our understanding of the monetary system along with almost 20 years of international QE evidence, outside a domestic financial crisis it is almost certain that an ‘Aussie QE’ will do nothing.

To explore this further, we need to dispel a few myths.

QE is not money printing

In a broad sense, QE is a monetary operation where the central bank acquires certain assets (usually deemed ‘high quality’) from the private sector. The assets are usually local long-term government bonds.

The purchase of these assets is satisfied / settled with cash.

The use of QE is often referred to as ‘money printing’, but it can also be characterised as injecting cash into the economy. Both descriptions are false.

As described above, QE is nothing more than an asset swap between the central bank and the private sector. The swap is of one form of monetary instrument (bonds) for another (cash).

From the perspective of the private sector, no new financial assets are gained. Only the duration of the asset held is altered. It is akin to moving a term deposit to an ‘at call’ deposit.

QE does not inject new money into the system

The counter to this argument says individuals and companies cannot use bonds to purchase real goods and services. Therefore, selling bonds to the central bank and receiving cash increases private sector purchasing power.

But this is not true.

Holders of bonds (typically financial institutions, the wealthy and superannuation accounts) are by their nature savers or reflect savers. These savings simply mirror net government debt. Removing bonds via QE results in the non-government sector holding more of their savings in the form of cash.

QE does not force down interest rates

Unfortunately, this argument ignores the evidence.

The following chart is sourced from our 2016 paper Is the 30-year bond cycle over? When tracking the movement in the US 10-year bond yield with the announcement of the commencement and completion of various quantitative easing programs, it is clear that: 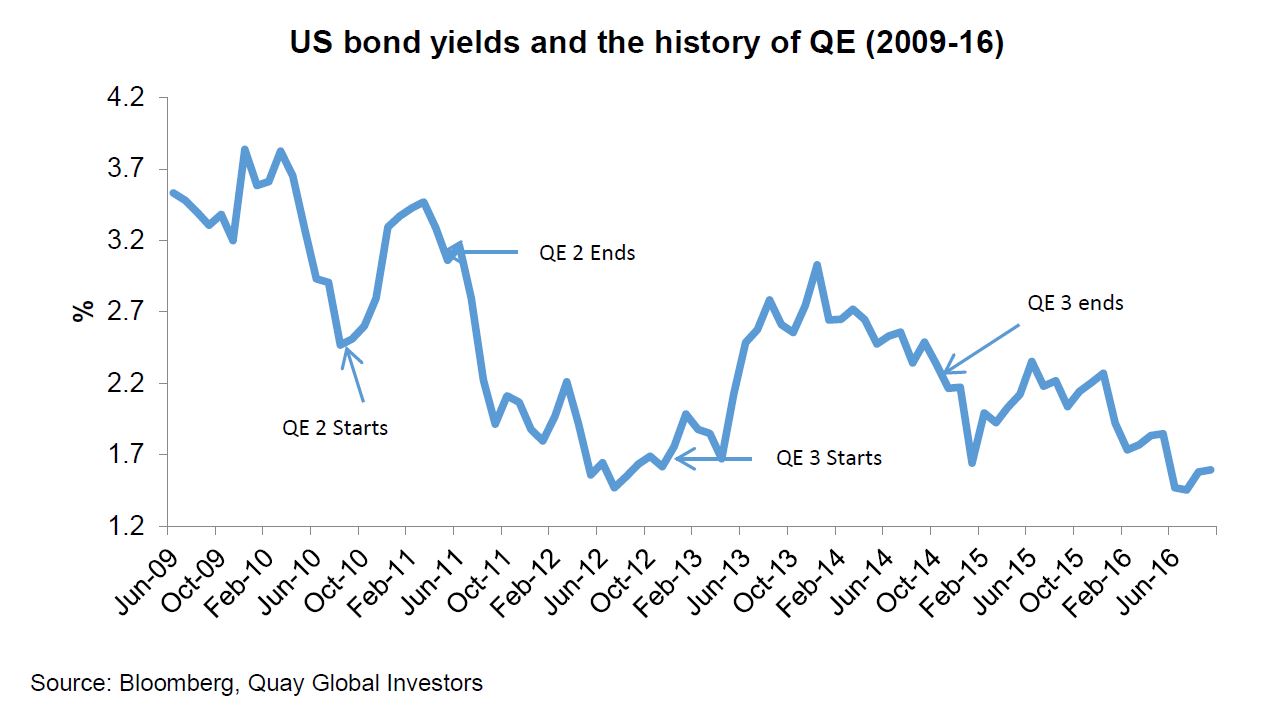 The evidence is counter to the argument that QE lowers long-term interest rates.

As we discussed in our paper Negative bonds yields – what does it mean?, long-term government bond yields are nothing more than an indifference point relative to long-term cash expectations. This means when the central bank signals the beginning of QE, market participants (historically) view such a policy as stimulus. And stimulus means the economy will accelerate bringing forward future interest rates increases.

Conversely, the end of QE is seen as ‘removing the punch bowl’, and therefore reducing stimulus – pushing out the prospect of higher official cash rates.

QE does not encourage banks to lend to the private sector

As discussed in our paper Modern Monetary Theory (part 2), banks do not need deposits or reserves to lend. They simply need enough regulatory capital (from shareholders) and a sufficient supply of credit-worthy borrowers to create a loan. And the loan creates the deposit. Without re-hashing the details again, we encourage readers to view this excellent explanation by the Bank of England.

Therefore, the mechanics of QE, which adds deposits and reserves in exchange for bonds, do not impact banks’ ability or willingness to extend loans.

The introduction of US QE in 2009 corresponded with the beginning of the 10-year sharemarket recovery. The easy narrative was that this was a QE-based boom because the Fed was forcing investors out of bonds into riskier assets.

It is further argued that the economic benefit of the policy is to create a ‘wealth’ effect – spurring spending and in turn stimulating the real economy.

Again, the evidence does not support the reality.

As highlighted below, the relationship between Federal Reserve assets and the US equity market seems to hold firm until late 2012. One can argue the market simply lagged the ‘money printing’ and caught up in 2017 – however, since then the bank balance sheet and the market have headed in opposite directions. The relationship is, at best, tenuous. Further, the posterchild of QE (Bank of Japan) has yet to lift the Nikkei 225 Index to its previous 1989 peak despite 18 years of QE effort.[3] 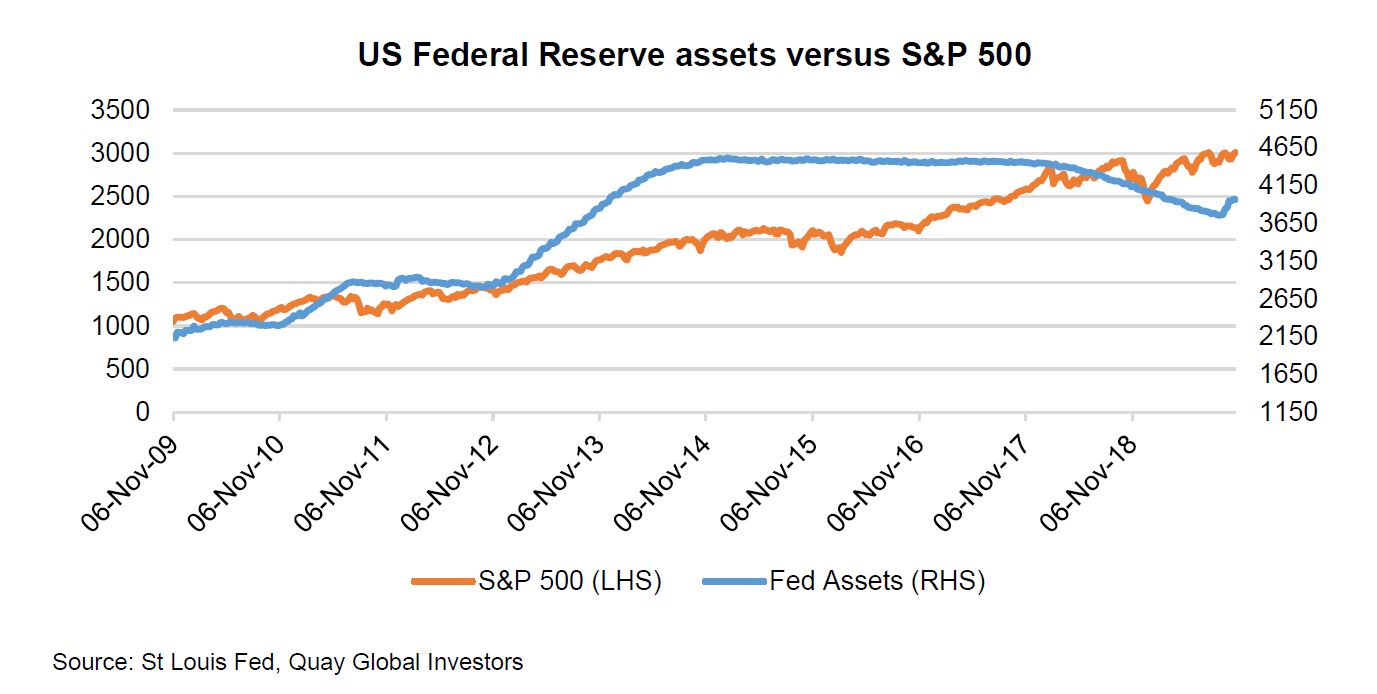 A more significant driver of long-term share market performance is profit (see below). And since the mechanics of QE are nothing more than an asset swap, its impact on profits is almost negligible. We say ‘almost’, because ultimately QE is really a private sector tax. 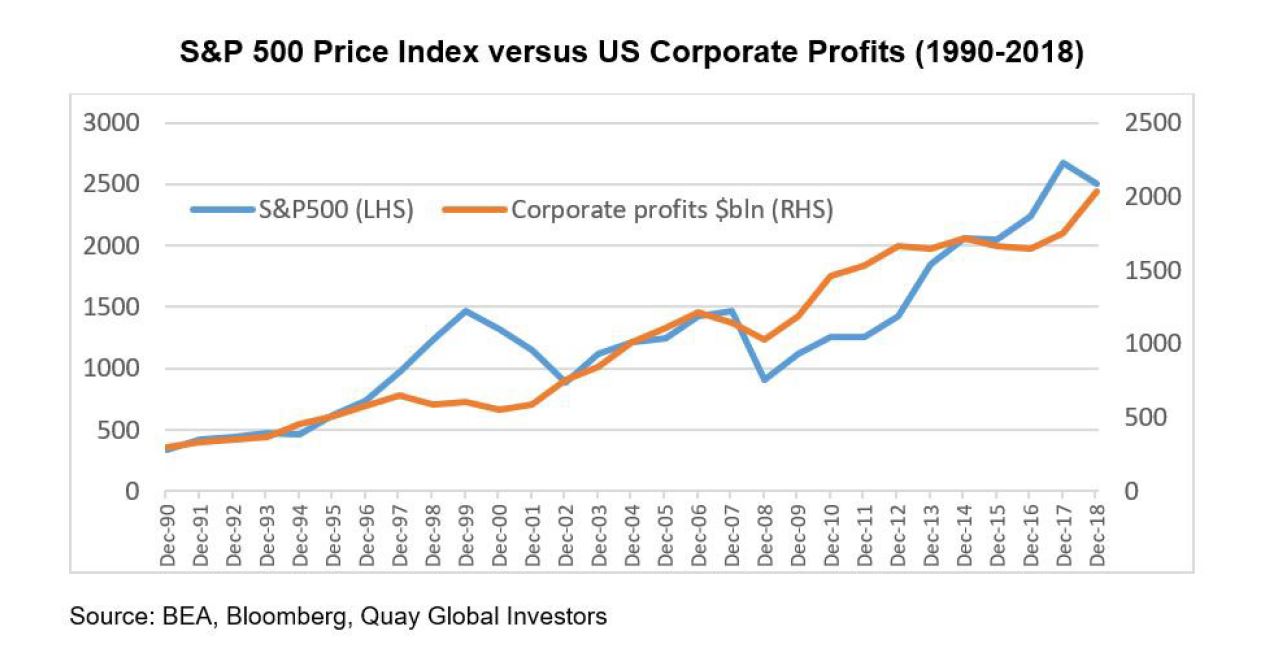 Mechanically, QE is a mild tax levied on the private sector

Up until this point, we have attempted to dispel the many myths of QE. Specifically:

These should not be controversial points. Starting with Japan, QE has been implemented in various economies for almost 20 years with little or no impact. Supporters of QE (BOJ) argue QE has not worked ‘yet’. We need more time.
More time. Really? After 20 years?
QE has largely failed to deliver because functionally it operates as a private sector tax aimed at the banking system, the wealthy and anyone that holds a superannuation account.
Since QE encourages the sale of low risk low yielding assets for even lower yielding cash, the result is lower net interest income to the private sector. Where does this income go? To the central bank on the other side of the trade, acquiring higher yielding bonds for the lower cost cash. In effect, the central bank is making an investment spread at the expense of the natural holders of bonds (including banks and superannuation accounts).
As highlighted in our paper Are central banks losing their effectiveness?, we can see this income effect in the US Federal Reserve’s profit and loss & distribution statement. Note the sharp rise in Fed profits and distributions at the time of initial QE (2009) – profits that were maintained (and grew) until QE ended in 2014. The lift in profits reflected the positive spread to the central bank via QE. 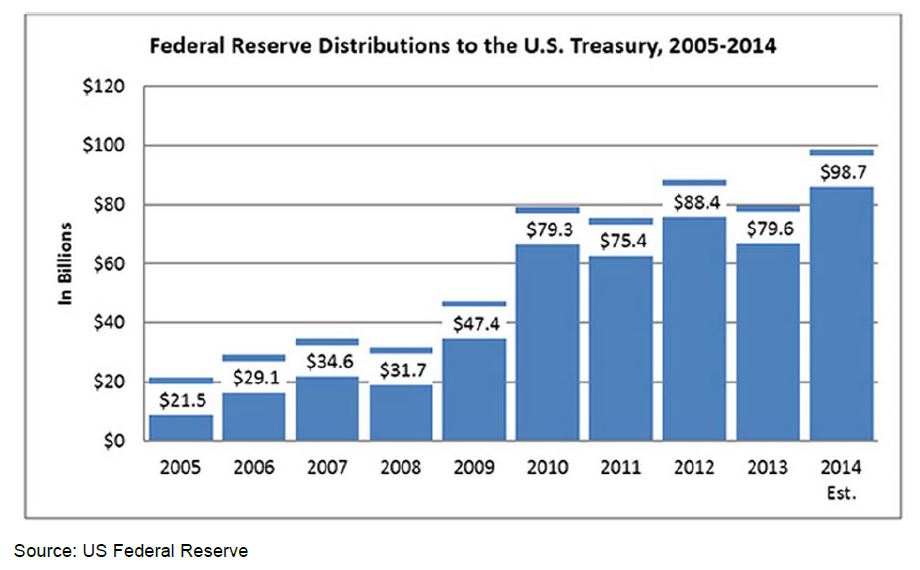 For investors seeking Aussie QE, be careful what you wish for. You are asking for the wider economy to be taxed.

If QE does not work, why do it?

This is difficult to answer, as we do not have access to the inner thinking of central banks (or bankers). We know that Japan has used QE since 2001 for little or no inflationary or stimulatory effect. Further, there appears to be little evidence it worked in the US, Europe or the UK. We can only guess that the central bank’s tools are so limited they will try anything.

Having said that, we acknowledge that during extreme credit events, central bank (and treasury) intervention to buy assets can help. In 2008, as the US banking system was on the verge of collapse, the Treasury and

Fed acquired risky assets (TARP), which stabilised member bank balance sheets. Until this time, banks were unwilling to lend to each other, causing a collapse in the payment system. Under this scenario (bad asset swapped for good cash), asset purchases helped stabilise the banking system.

However, outside of a banking crisis, QE is largely ineffective. It is not inflationary (because it is not money printing), and it is not stimulatory (it is functionally a tax). Investors expecting Aussie QE to provide economic salvation will be disappointed.

For the economy to turn the corner, what is needed is a significant federal government fiscal deficit (which is true money printing[4]). However, based on the current political need to achieve a surplus, we hold out little hope.

Download article
To receive CPD points for reading, view this article on AdviserVoice’s website and complete the questionnaire.

[4] For more on the mechanics of fiscal spending, refer to our paper Australian Sovereign Credit Rating (AAA) – does it matter?