Here we are seven years later, and the fear of the great bond collapse is upon us - again. This time, the catalyst appears to be a near universal acceptance that monetary policy is reaching its limit.

Talk of fiscal policy from the US to the UK is beginning to make bond investors nervous, as is the idea that Quantitative Easing (QE) and negative interest rates will probably not last forever. Indeed, if bond investors no longer fear ever reducing interest rates (into the negative), then what is the downside from shorting / underweight long bonds?

None of this is particularly surprising at Quay. Earlier this year, we questioned whether central banks were losing their effectiveness. This idea is now gaining traction with market participants and policy makers.

But is the bond bubble (if that’s what it is) about to burst, and if so, what does it mean for real estate?

Rising bond yields are not always the enemy of real estate. Although widely held as a proxy for fixed income, we have long argued real estate valuation is far more nuanced than a simple NPV of static cash flows. Valuations are dynamic – yes higher discount rates are bad, but not if offset by higher growth rates.

Back in December last year we highlighted the last time the US increased the cash rate (2004-2006) US REITs generated a total return of 61.5%, exceeding the S&P500 by 38%. Our analysis is reproduced in the chart below. 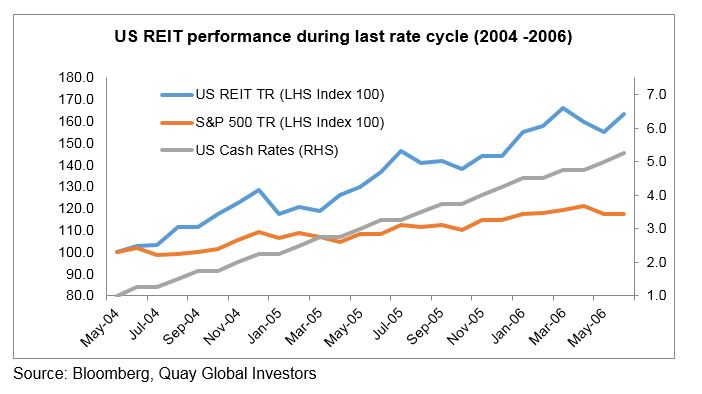 This time, however, we are discussing long duration rates (10-year bonds). For that, we need to look a little further back; when yields began to increase in anticipation of interest rate hikes. In particular, yields increased from 3.37% to 5.05% between May 2003 and April 2006.

Again, US REITs performed well in absolute and relative terms. 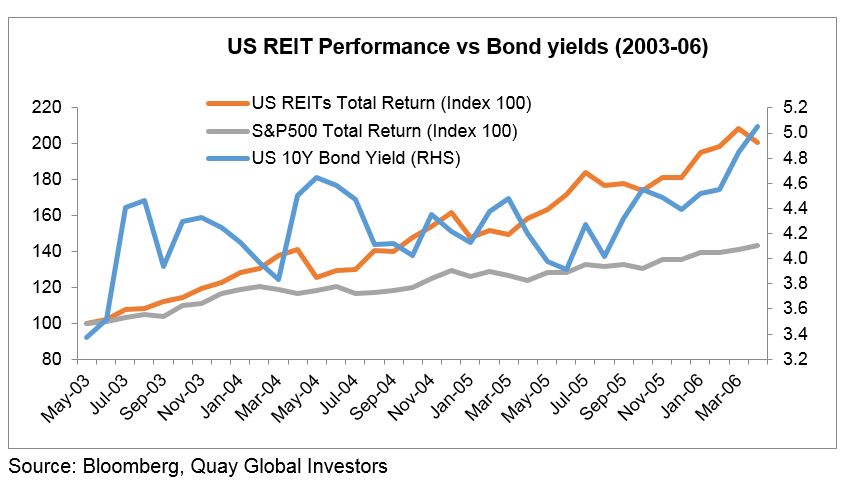 More recently, the 2012-2013 ‘taper tantrum’ also resulted in a sharp increase in bond yields – from 1.5% to a height of 3.1%. While US REITs delivered poor returns during that time, even underperforming equities, capital was preserved as represented by the index below. 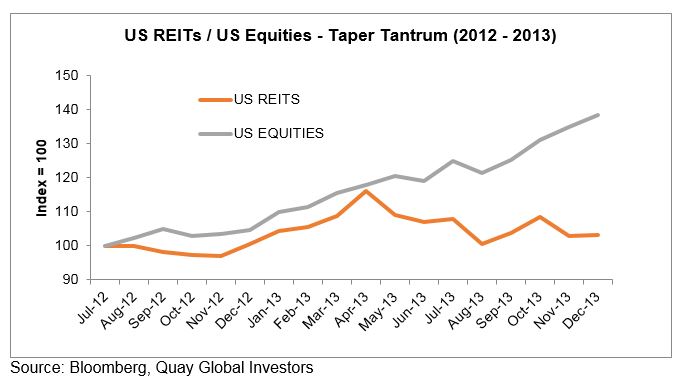 This is not to suggest a rise in short- or long-term interest rates will not negatively impact US REIT pricing – however, it does suggest it is not a foregone conclusion.

How likely is a Bond crash?

Much of the discussion centres around QE artificially reducing bond yields - therefore the removal of QE from Europe and Japan will spark a bond yield correction, perhaps with a knock-on effect around the world.

However, evidence from the US suggests that QE increases bond yields and the removal of QE reduces yields. This may sound counter-intuitive, but the evidence is pretty clear, as the chart below highlights. 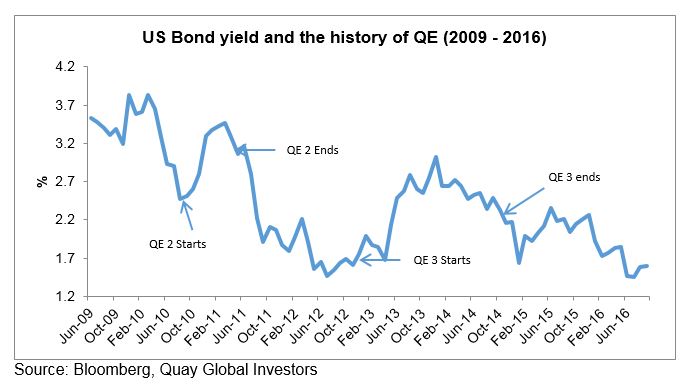 US 10-year bond yields consistently increased in the lead-up to and beginning of Quantitative Easing. Yet when QE was ending, or indeed finished, bond yields fell.

Firstly, there is always enough capital to buy Government bonds. Government (net) spending creates the money to buy the bonds (for more on this, please refer to our paper, Australian Sovereign Credit Rating (AAA) - does it matter). Bond pricing is never about liquidity - hence the futile nature of QE. Instead, bond yields are nothing more than the cumulative expectation of the cash rate, which in turn is solely determined by the central bank. The yield reflects an indifference point between holding the bond (for say 10 years) and holding cash for the same duration.

When expectations for the cash rate increase, for instance, with good economic data, expectations of aggressive fiscal policy or central bank comments, bond yields normally follow to allow for the expectation cash rates will be higher, on average, over time.

Since most market practitioners viewed QE as ‘stimulus’, it was natural that its implementation would cause bond yields to rise in anticipation of an improving economy. The end of QE reversed the process, as the economic reality around the ‘new normal’ seeped in.

So, are we in for a bond crash?

After eight years of near-zero interest rates in the US, it has become clear that increasing the cash rate is far more problematic than reducing it. We are sure the Bank of Japan (BOJ) would agree. Therefore, any significant sell-off in bonds is either:

The second scenario is more likely if Governments pro-actively increase deficits to reduce the space capacity in the economy, thereby lifting inflation. Hence the recent nervousness around talk of fiscal stimulus. While this point has been topical among economic commentators, the dominant ideology of ‘balanced budgets’ among Western Governments means we will believe it when we see it.

How does this affect Quay’s investment process?

For real estate, neither outcome is positive or negative. The key to successful real estate investing is understanding the demand and supply equation. Admittedly, the widespread levels of undersupply that was prevalent when we launched the Quay Global Real Estate Fund in 2014 isn’t necessarily true today, however in our opinion most markets remain balanced especially compared to history (see charts below for the US). 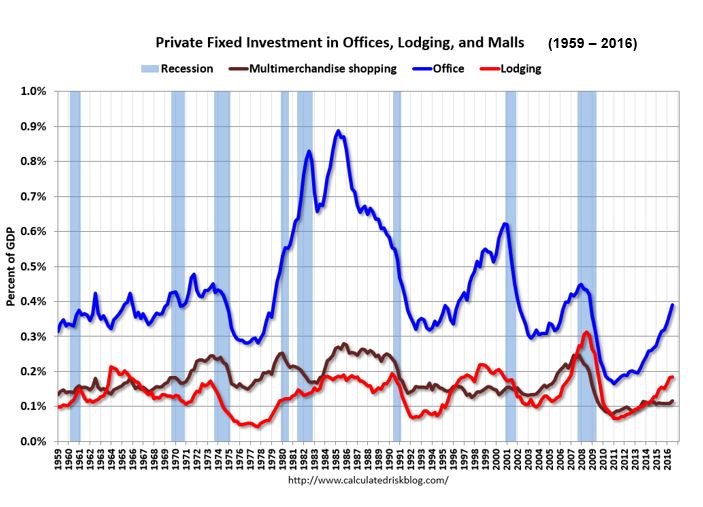 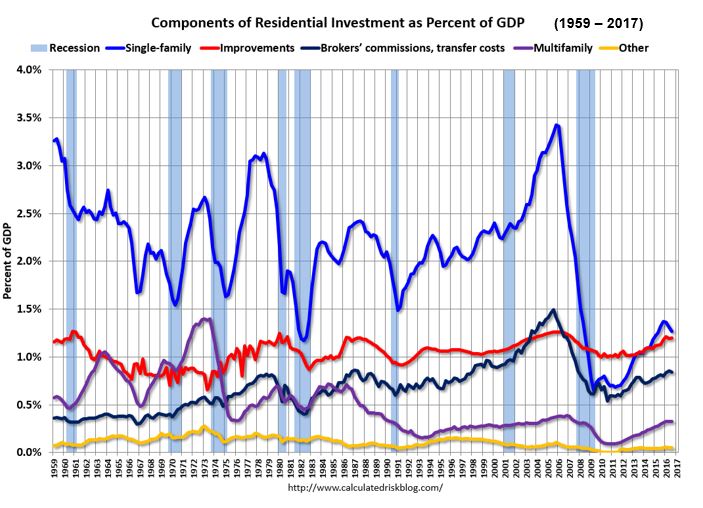 Yes, rental growth will moderate, but we still believe a well-constructed portfolio of quality global listed real estate securities will generate our targeted total returns over the medium and long term.