Investment Perspectives: Modern Monetary Theory, and why you're about to hear a lot more about it

If you’re paying attention to US politics, you may be aware of an emerging new[i] economic theory supported by many US Democrats, including Congress ‘freshman’ Alexandria Ocasio-Cortez. This economic framework is generally known as Modern Monetary Theory, or MMT.

There have been a number of ‘hot takes’ from economists and journalists on the topic over the past couple of months, suggesting it is dangerous (ECB), garbage (Larry Fink), nothing new (Paul Krugman) or valuable (Paul McCully).

I was first introduced to MMT 10 years ago when I stumbled on a blog by Bill Mitchell. As a finance professional, I was somewhat dismayed that the financial crisis took me (and my colleagues) by surprise. How did I miss it, and could I recognise the signs if it were to happen again?

Since 2009, I have read hundreds of articles (thanks to Bill Mitchell), academic papers and books on the topic. The purpose of this article is to provide you with a more balanced (market-based) perspective of MMT, and why you’ll hear a lot more about it over the next few years.

MMT is extremely detailed and has a deep history, so I’ll cover the topic over two parts. This month I will discuss MMT and the role of government.

In our opinion, the biggest weakness of MMT is the name. With the “T” meaning “theory”, the uninitiated expect MMT to be an un-proven concept or policy, or something that could be tried with unknown consequences. But MMT is as much a theory as is the Theory of Gravity. That is, MMT is a fact-based, empirically supported framework of the modern (post gold standard era) monetary system.

At its core, MMT is a framework and detailed description on how the monetary system actually works across most developed countries. If you are reading this in Australia, the US, UK, Canada, Japan or New Zealand (and a few more countries), then congratulations – you are already living in an MMT world. Yes, even you Jerome Powell!

So if MMT is nothing more than a description of the system, how is it different to mainstream economics?

Distinguishing between a currency issuer and currency user

In 2011, the poster child of mainstream economic thought, Paul Krugman, famously asked why there was such difference between Japanese and Italian interest rates. He noted Japan’s government debt dwarfed that of Italy – yet Japanese interest rates were always zero[ii], while Italy (and most of Europe) was suffering from a sovereign debt crisis.

MMT recognises countries that issue their own currency cannot inadvertently become insolvent. Of course, that does not mean they will never go broke. But insolvency is a political choice, not economic. For example, the debt ceiling in the USA is a political constraint, not an economic constraint.

However, a country like Italy is no different to a household. Like a household, Italy does not have its own currency-issuing central bank, and therefore can ‘go broke’. It was with this insight that many MMT scholars accurately predicted the inevitable Euro crisis almost 10 years before it happened.[iii]

On the other hand, currency issuing governments like Australia, Japan, the UK or the USA are never financially constrained. Whether Australia’s deficit is $10bn or $100bn, the debt will never force interest rates higher or condemn Australia to an economy similar to Greece – there will always be a buyer of its bonds.

Deficits do matter – just not the way you think

Recognising that money is not a constraint for government, many critics jump to the conclusion that adherents of MMT – known informally as MMTers – believe deficits do not matter, and therefore the entire framework is garbage. Yet there are many papers over the years where MMT academics clearly acknowledge deficits have always mattered – just not the way people traditionally think[iv].

The MMT framework understands that while money may buy any good or service in an economy, it does not guarantee that good or service will be available. That is, the constraint on unlimited net government spending is not financial, but the availability of real resources in the economy. And while a country like Australia or the USA can never run out of its own currency, it can run out of labour, energy, food or water. Put another way, the real budget constraint is inflation.

Deficits create the money that ultimately buys the bonds

Some critics misinterpret this concept into believing that by not requiring taxes to fund the budget, MMTers are advocating that governments simply force their own central bank to fund government spending directly. They argue this risks the independence of central banks, turning them into political tools and discrediting their role in the economy, causing foreign investors to flee – and thus rendering the local currency worthless.

Such a criticism generally reflects a poor understanding of how the Treasury, central bank, commercial banks and bond issuance interact on a daily basis. In Australia, the central bank already assists in funding the government and has been doing so for decades. This is due to the institutional, regulatory and policy framework of the Australian financial system. The step by step process of this relationship is technical and requires an understanding of bank reserve accounting, but for those interested, we have outlined it in the attached appendix of this article.

The implication is that government spending does not crowd out the private sector, which is believed to force up interest rates. Not convinced? The data below shows US interest rates continue to fall, despite higher levels of government debt. 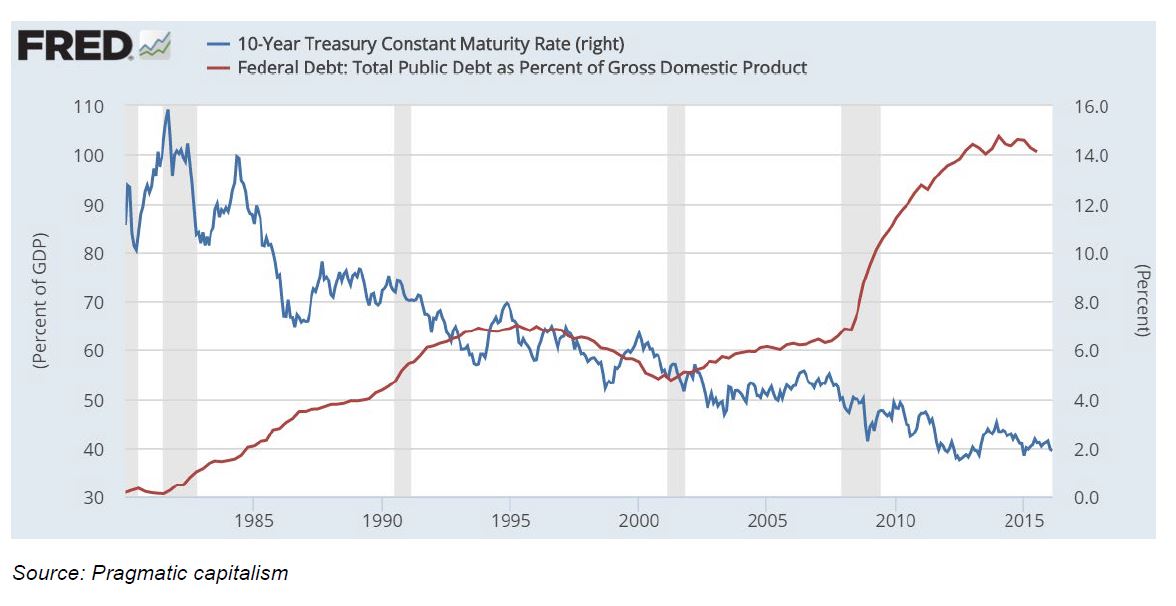 When confronted with such data, critics often suggest the USA is different, as the US dollar is the world’s ‘reserve currency’. But if that’s true, why do we have the same dynamic in Japan, the UK and even Australia? 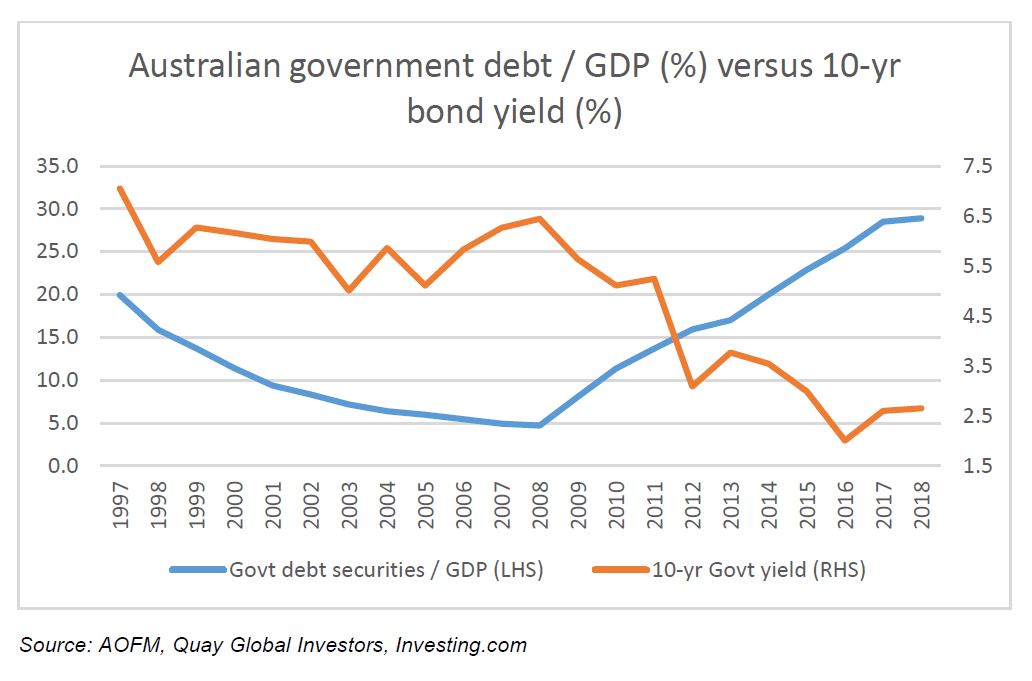 The recognition that spending comes first has profound implications. It means net government spending creates a net non-government surplus (or financial assets inclusive of bonds). That is:

This can be empirically shown via the sectoral balances over time. The chart below shows the balances for the USA from 1952-2015, although the data aggregates the household sector and business sector as “domestic private sector”. 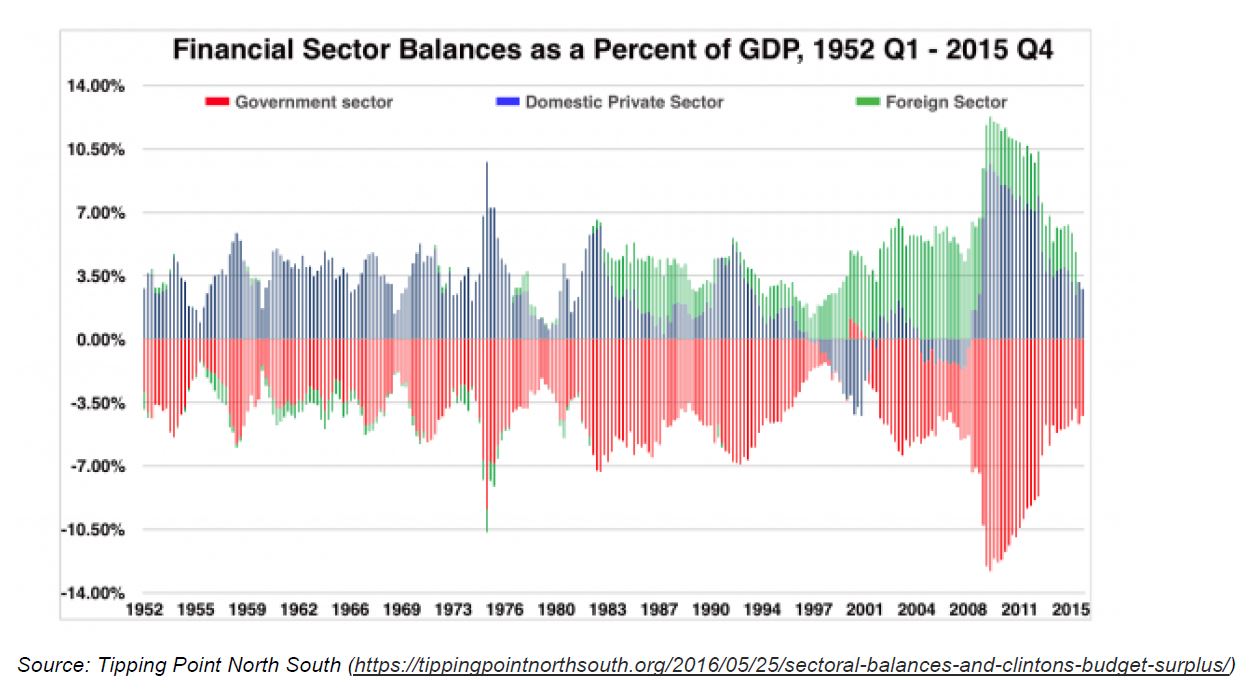 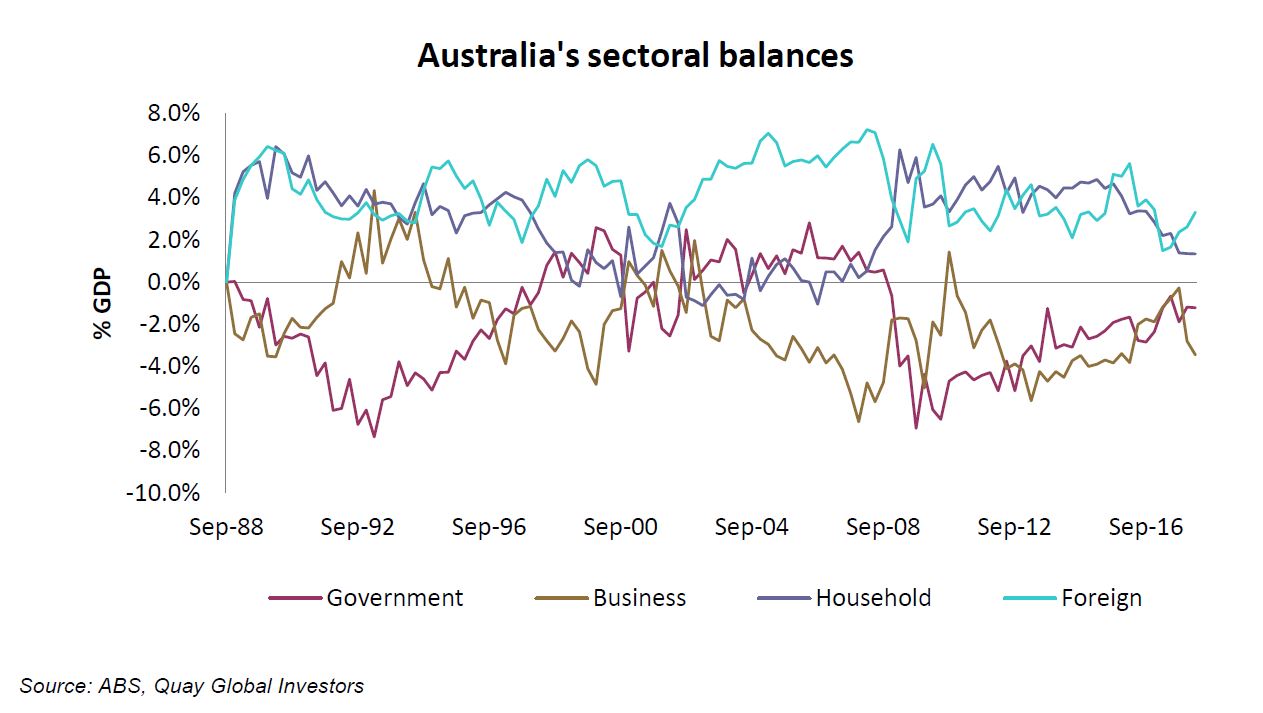 Taking this a step further, there is a very strong link between net government spending and household savings. 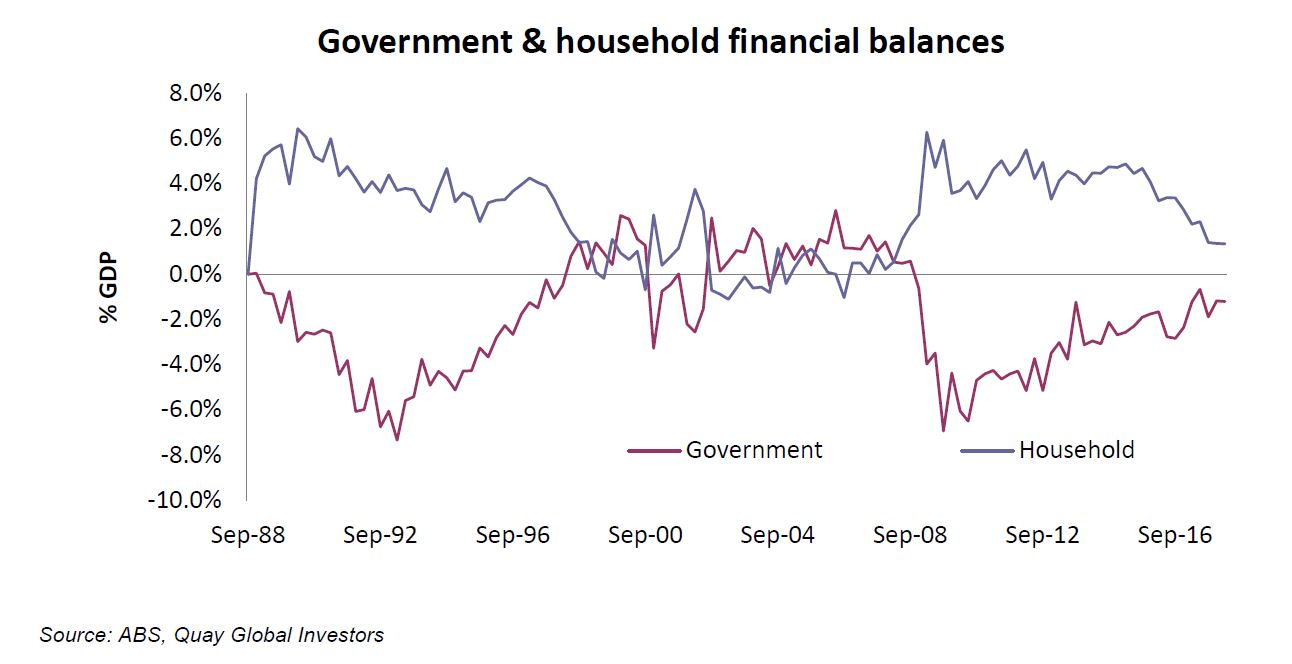 MMT and the role of taxation

If Australia is not fiscally constrained (but resource constrained), why are our schools and hospitals underfunded? Why do we have any unemployment? What is the role of charity? And why do I have to pay taxes if they don’t actually fund government spending?

Trust me, during my 10-year journey understanding this framework I asked myself the same question. Yet under MMT, taxes play a vital role in the economy – but not for financing the government. Taxes serve two purposes:

Critics of fiat currencies like the US or Australian dollar argue that since ‘going off the gold standard’ there is nothing supporting the value of the modern currency other than good faith. If that faith ever vanished (which some suggest is inevitable), the value of the currency will be destroyed. Hence ‘hard money’ advocates suggest gold is the only true form of money and will always be a store of value; and more recently, crypto-currency advocates offer the same argument.

From an MMT perspective, requirement for citizens to pay taxes creates demand and therefore an intrinsic value for the currency. For example, try to pay your taxes at the ATO with gold and your payment will be rejected. The ATO will only ever accept AUD to satisfy any tax liability. Alternatively, try not paying your taxes at all and you will end up in jail. The price of engaging the Australian economy is the requirement to pay tax.

There are historic precedents that support this notion of tax creating demand for fiat currency from diverse periods, including the colony of Massachusetts[v] in the late 17th century and British colonies in Africa in the 1800s[vi]. Most failures of this system generally stemmed from overspending or weak taxation collection system (i.e. deficits do matter).

From an MMT perspective, the role of tax and the strict manner in which it is collected gives rise to underlying demand for the currency.

MMT critics are quick to try and draw parallels to economies that succumb to hyperinflation, suggesting this is a result of “implementing MMT” (which as we know is not something that can be implemented).

Understanding the role of inflation is central to the MMT framework. In fact, MMT was one of the very few schools of thought that correctly predicted Quantitative Easing would not cause inflation[vii].

And as we have noted, deficits do matter from an MMT perspective, since too much spending crowds out real resources in the economy, resulting in price inflation. Furthermore, the economic history of hyperinflation rarely begins in an economy operating at full employment – more often than not, hyperinflation is a result in the collapse of the productive capacity of the economy.[viii]

MMT is nothing more than an accurate description of how the monetary system works. To summarise:

Upon recognising these realities, many policy ideas may arise. Recently, US Democrat Presidential hopefuls have been advocating policies such as ‘The Green New Deal’, ‘Medicare for all’ or ‘Free college tuition’.

From an MMT perspective, these proposals are clearly ‘fundable’, in the same way the recent US$1.5 trillion tax cut passed by congress late in 2017 was ‘funded’. (We note US Treasury rates have since declined despite the sharp rise in bond issuance.)

MMT understands that ambitious policy ideas are only ever about whether there are enough real resources in the economy to meet these goals. For example, is the labour and technology available to transition the US economy to renewable energy over 10 years? Are there enough hospitals, nurses and doctors to provide the medical services needed to meet the needs of 330 million people? Do universities have enough lecture halls and teachers to cope with an increase in student demand?

It’s never about ‘how we pay for it’.

Much has been written about MMT of late. A lot of it has been dismissive, passing it off as a ‘bad policy idea’, where ‘deficits don’t matter’, and a recipe for the next Zimbabwe. Anyone that has spent time reading any MMT academic literature will recognise these arguments carry very little weight, and most criticism has yet to challenge any of the core understandings that come with these decades of literature.

This ‘new’ idea is not going away any time soon, those who criticise it without detailed understanding and research may need to do some backtracking in the years ahead.

For those interested in reading more, I recommend the following:

[i] The framework is hardly ‘new’, as most of the more recent work began in the mid 1990s.

[iv] This is a good paper outlining MMT’s position on why deficits matter http://rooseveltinstitute.org/deficits-do-matter-not-way-you-think/

[vi] For more on the historic use of tax to create currency demand, I encourage people to read the excellent “Seven Deadly Innocent Frauds of Economic Policy” by Warren Mosler. You can download it at https://moslereconomics.com/wp-content/powerpoints/7DIF.pdf

[viii] I’m no expert on the economic history of all hyperinflation events, but I would suggest interested readers refer to this excellent summary on Zimbabwe from Professor Bill Mitchell. http://bilbo.economicoutlook.net/blog/?p=3773

[ix] A copy can be downloaded at https://moslereconomics.com/wp-content/powerpoints/7DIF.pdf