Investment Perspectives: The economics of malls – myths and misconceptions

Chris Bedingfield addresses some of the myths and misconceptions of retail property to establish whether today’s depressed prices represent an opportunity or a trap.

Back in 2016 we published an article Thinking about Malls, which warned of the changing environment facing retail landlords around the world. At the time we were particularly concerned about retail landlords that were ’middle of the road‘, offering neither experiential retail nor convenience, and landlords located in high supply markets.

Based on our views at the time, we have been careful with our selection of retail landlords as part of our investment process. For example, at the time we published our thoughts, notwithstanding the spectacular success of then-largest REIT Simon Property Group, we were happy to avoid it in our portfolio. The same can be said of all the UK/European mall REITs, which together formed a large part of the Global REIT Index. 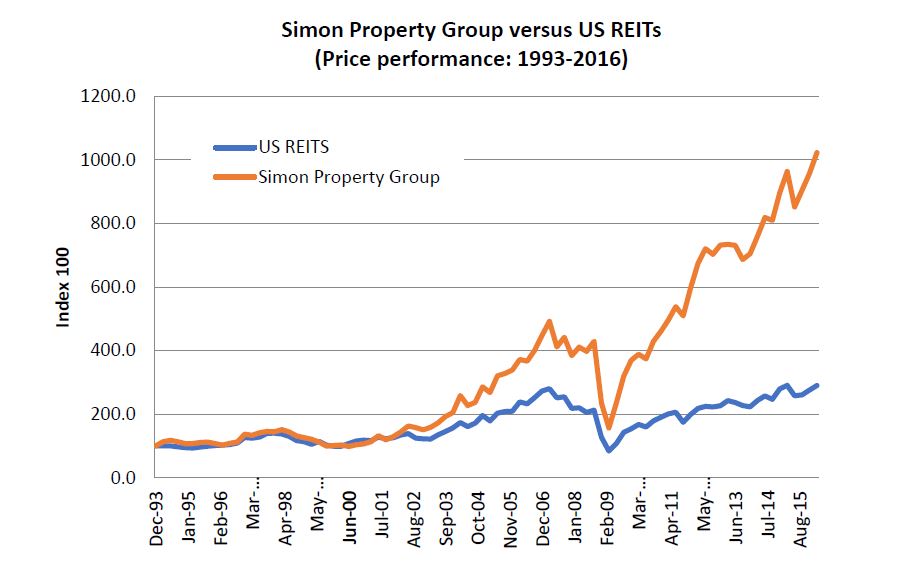 Since 2016, all major global mall REITs have performed terribly, including our preferred exposure, Scentre Group.

It is easy to conflate the reasons.

In our view, some of the underperformance was inevitable. The US mall industry is hopelessly over-supplied and has structural headwinds even without the surge in online retail. In Europe and the UK, the underperformance is as much about balance sheet issues as industry headwinds, in addition to what we saw as poor asset management in select REITs. Across all of this, a pandemic has forced most operators to close, foregoing rent and pushing many tenants to the edge of bankruptcy.

The big question for global managers today is whether today’s depressed prices, some of which are down 90% since our 2016 report, represent an opportunity or a trap. To answer this, we turn to the basic (often overlooked) economics of retail property, and address some of the myths and misconceptions often argued by commentators and analysts

Without context, leasing spreads are irrelevant

A leasing spread is generally defined as the difference in rent for a new lease compared to an existing lease. If the new lease is higher, it reflects a positive leasing spread. If lower, a negative spread.

In Australia, most retail landlords report negative leasing spreads, which across the investment community translates into headlines of ‘falling rents’. However, without context, there is simply never enough information just in ‘the spread’ to come to such a conclusion.

For example, if a landlord strikes a lease that escalates at a fixed 4% per annum for five years (typical in Australia) and records a negative spread of say 4% on renewal, then over 5 years the rent has still increased by 16% (5 years x 4% per annum less 4% on renewal), or 3% per annum compound.

Conversely, if a landlord strikes a lease that is flat over 3 years (typical in Hong Kong) but records a positive leasing spread of 6%, the annualised growth is 2% per annum.

There a number of other factors that affect leasing spreads which make direct comparison and general conclusions impossible, including:

A tenant’s occupancy cost is a simple ratio of tenant rent and other contributions as a proportion of sales.

Over time, the better landlords and shopping centres have tended to have steadily rising occupancy costs, sometimes driven by cycle and sometimes structural. The cause of these rising costs is often cited as ‘the rent is too high’ or ‘unaffordable’.

But again, without context, occupancy cost ratios can be misleading.

Across most real estate sectors, analysts and investors understand that portfolio rents and sales over time are not comparable due to acquisitions and divestment. To overcome this, the investment community relies on ‘same store’ metrics to gauge the underlying health of the industry.

This is more relevant for malls, because quite often assets are redeveloped, repositioned or expanded, which makes direct sales and rent comparison problematic. However, even the same store data can be misleading between landlords.

Not unlike other sectors, what is deemed ‘same’ can vary. We know that in other markets, despite significant capital spend on a particular asset, landlords often include the new (much higher) rent on the refurbished property as ‘same’.

Even in a market where the rules applied are consistent, comparisons are not always easy.

Consider two landlords conducting two similar shopping centre expansions. Both schemes plan to spend the same money and generate the same return (rental uplift), all based on the same increase in retail sales.

Now, assume the first landlord executes their plan perfectly. On day one after completion, sales hit their target and the centre is 100% leased, all at the budgeted rents.

Over time, when both landlords eventually add their properties to the same store pool, due to the lower starting point, the second landlord will have:

Over the years, retailers have often used the financial media and local analysts to negotiate better rent. Recently, a major Australian newspaper ran the following headline (advertisement?) on behalf of Premier Investments.

Premier Investments manages a stable of retailers and is one of the largest retail tenants in Australia, with over 1000 stores.

Of course, if stores are not profitable due to excessive rents it is rational to either ask for a lower rent or close them. Unfortunately for Premier, it’s a listed company – so we can estimate the profit share between landlord and tenant, and determine how much of this threat is real and how much is bluff. Let’s start with the most recent financial results.

The most telling data point here is gross margin.

Assuming the company leases a store in a productive shopping centre (say a Scentre Group asset), then across a 100sqm footprint, Premier’s retailer will generate approximately $1.2m in sales per annum. This in turn equates gross profit of $732k per annum. After in-store staff costs, the profit before rent would be $550k-$600k per annum before rent.

Assuming 20% occupancy costs (which is a pretty high rent ratio), the rent of $240k per annum would leave a store contribution margin (profit) of $310k to $360k to meet the fixed charges of the company, head office costs and profit to shareholders.

First, no retailer ever walks away from a positive contribution margin. Secondly, the above analysis reflects a profit/rent cover of 2.4x, which in a global context is very generous to the retailer and provides enormous downside protection for landlord rent in the event of a downturn (more on that below).

In short, when it comes to the more productive shopping centres, we believe Premier Investments (along with most other retailers) has no plans to go anywhere and will happily pay the rent.

For stores located in less productive centres, the in-store profit is much lower and negotiations will be more problematic. Consistent with our thesis in 2016, the landlords in these centres will have poor pricing power, and could very well lose tenants as incremental sales shift online.

For most retailers, sales can fall a lot and rents are still affordable

Our observation is that almost all commentary relating to weak retail sales is assumed to be structural (via ecommerce headwinds). However, we know from reported data that prior to the pandemic, the best malls continued to grow sales and market share – not only in Australia, but almost everywhere around the world.

More recently, there is a perception that in-store retail sales have significantly declined due to the pandemic and subsequent shutdown. Many landlords have been pressured by governments to ‘share the pain’ and we have consequently seen rent relief across various industries.

However, as we (hopefully) emerge from various stages of lockdown, retail sales will recover. Importantly, even if sales do not get back to pre-COVID levels there is no reason why rents should fall, especially at the best shopping centres.

To understand why, consider the P&L of Premier Investments above. As the table below shows, even if sales were to fall by 30% the store would be still profitable (contribution margin $0.1m) with the same rent. If the sales decline was viewed as cyclical, the tenant would almost certainly hold their spot so as to benefit from the eventual recovery. 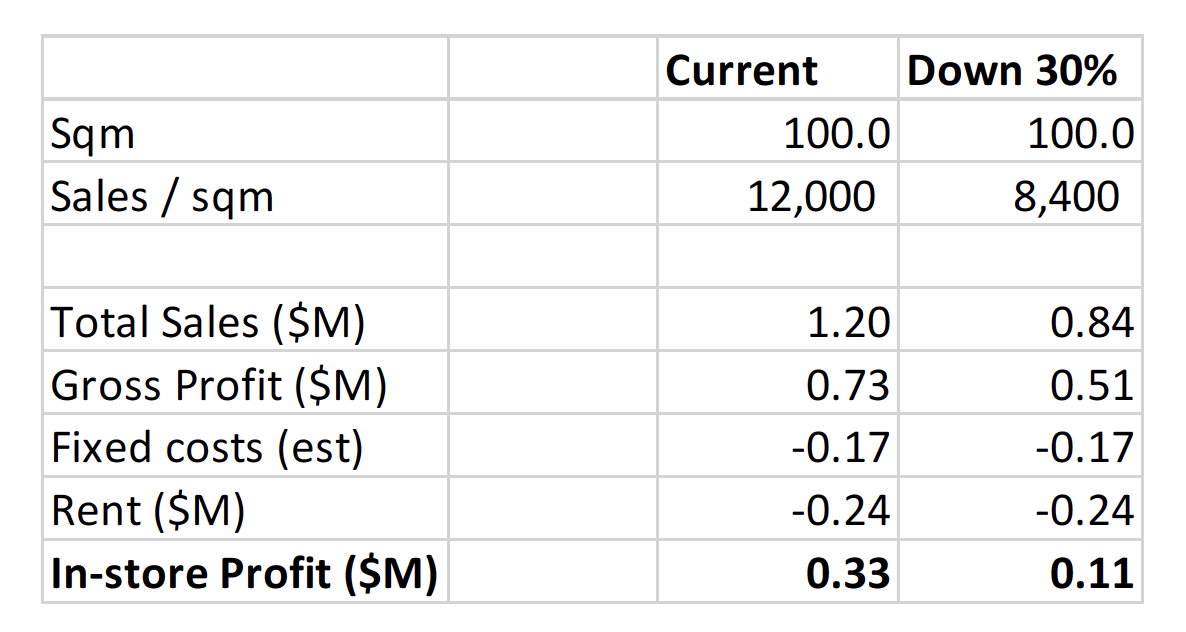 In Australia, the retail environment is stronger than you may think

The latest ABS data confirms retail sales are growing at a very healthy rate. Using a typical landlord measure, moving annual turnover (meaning the 12 months total sales to September 2020 versus September 2019) retail sales are up 4.3%. And if we exclude online sales, bricks and mortar sales are up +1.9%. Incredibly, that includes almost the entire national retail infrastructure being shut down for 2 months, and Victoria (25% of the economy) for 6 months.

This is not true for pretty much any other asset class. For example, if an investment bank wins a profitable IPO, it does not make the office tower in which they reside more valuable. Nor can the office landlord lay any claim to part of the bank’s success. Office towers are the ultimate commodity asset class.

And yet despite its unique partnership model, the retail industry is often analysed in the same context as commoditised real estate like office or industrial, often resulting in incorrect conclusions and recommendations. This leads to the many myths and misconceptions across the retail industry.

So, is retail property a buying opportunity or is it a trap?

The answer is: yes.

Further to this article, don’t miss Quay’s recent podcast on the future of retail in a post-COVID world.