The year 2020 will be remembered for many events. Besides COVID-19, there were the Australian bushfires and US political turmoil.

Last January, while the S&P 500 was coasting near all-time highs, stories emerged of a new virus in China. If you told an investor then that this ‘emerging virus’ would turn into a global pandemic, causing almost 100 million infections and over 2 million deaths[1] (at the time of writing), with shattered economies, sharply higher unemployment, forced business shutdowns and stay at home orders, they’d have gone short and retreated to their New Zealand bunker!

The easy answer is ‘government stimulus’.

The more interesting answer is found when looking at what specifically turned the markets. To understand this, it’s important to trace the steps of the US policy response before, during and after the turning point in the markets.

As the effects of the coronavirus became clear in the months of February and March, risk assets plunged. The first to act was the US Federal Reserve. On 12 March, they announced an immediate $1.5 trillion repurchase of US Treasuries to ensure adequate liquidity in the banking system. The S&P 500 bounced 9% the following day.

On 15 March (a Sunday in the US), the Fed announced a 100bp reduction in the cash rate to 0-0.25%, in addition to a new US$700 billion quantitative easing program (US$500bn in US Treasuries and US$200bn in government backed mortgages), and signalled limitless future purchases.

US futures opened an hour later ‘limit down’ (i.e. the maximum allowable 5% price decline). The market continued to fall, ending the trading day at 2,398 – down 12%.

On 17 March, the Fed announced a US$350 billion commercial paper buyback program to ease funding in the commercial (non-bank) markets. The following day, markets fell a further 5%.

Up until this point, investors were ignoring all the efforts of the Federal Reserve.[2] However, a more important development was occurring in the US Congress.

Up until 20 March, US Congress was passing small targeted spending initiatives, including $8 billion on 8 March and $192 billion on 18 March. During this time, House Democrats were drafting a bill that would introduce universal basic income for all US citizens. One-time payments were being discussed by Republicans in the Senate.

However, it was not until around 20 March that serious spending proposals were being considered. Senate Majority leader McConnell indicated support for a third stimulus package of at least US$1 trillion (5% of GDP). By the time the Democrats included their initiatives, along with clear support from President Trump, a final bill amounting to US$2.2 trillion (10% of GDP) was passed by the US Senate on 25 March with a 96-0 vote. Additional stimulus payments were signed into law later, including the US$484 billion Payment Protection Program (on 21 April). Markets turned only when it became clear a significant fiscal response was likely. 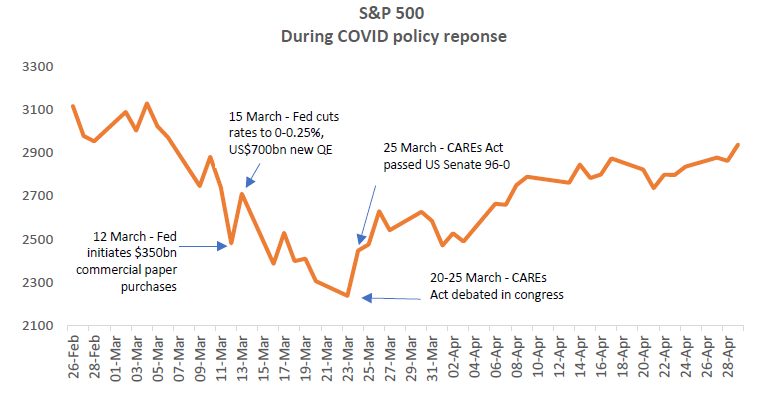 All eyes on the Fed

During the 2010s, most financial commentary centred around ‘Fed watching’. Whether it was quantitative easing or interest rates, the consensus was that the actions of the Federal Reserve mattered for equity markets.

However, despite the countless hours of analysis of every Fed move between 2010 and 2020, total US equity returns were almost entirely explained by stock dividends and earnings growth. Unlike previous decades, there was no PE expansion. This, despite record activity by global central banks that was supposedly driving investors into risk assets. 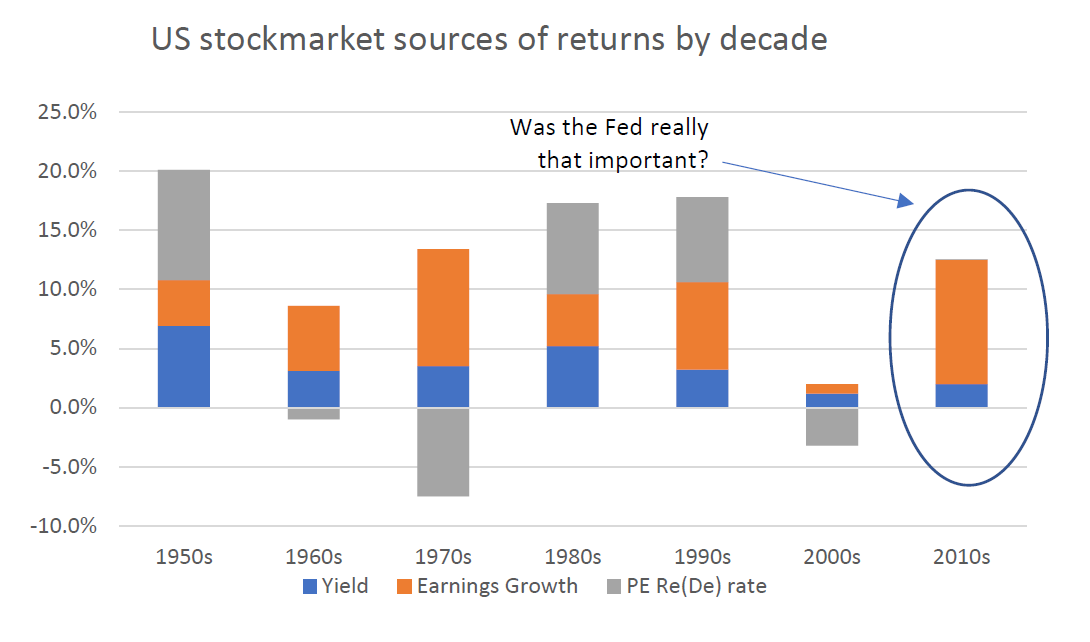 Why was there no PE expansion despite unprecedented central bank activity? The fact remains that the transmission mechanism between central bank actions and the real economy and risk assets is incredibly weak. Central banks don’t actually ‘print money’ as is widely touted. For example, in Australia the RBA’s QE program issues Exchange Settlement Balances (ESB), which is not legal transactional tender in the real economy and is only useful for commercial bank settlements on behalf of bank customers. For more on this, see our previous article 'Aussie QE may be coming, but it will probably do nothing'.

As emerging economic ideas like Modern Monetary Theory (MMT) began to take hold across buy-side and sell-side economic research, by 2020 most investors understood the limits of Federal Reserve actions and acted accordingly. They waited for the real game – the fiscal response.

2020 and the great shift in financial markets

Investors that remained bearish after the 23 March low were caught out. The narrative was simple – this was worse than the financial crisis (unemployment was expected to be +20%[3] in the US), so market performance should be worse. 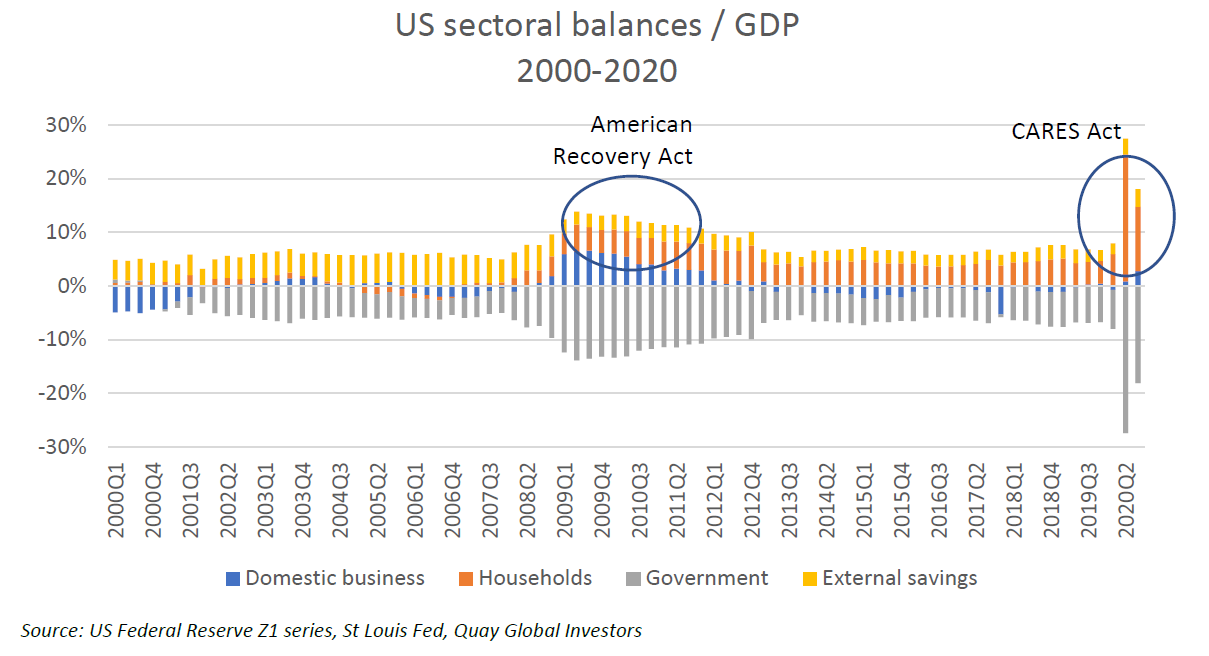 As regular readers of Investment Perspectives will know, the sectoral balances recognise the accounting realities between the government sector, the domestic private sector and the foreign sector, meaning net spending always equals zero, as the chart above proves. The surge in government deficits has therefore generated a huge increase in net financial transfers to the non-government sector.

Despite some politically inspired claims that the spending went to big companies (driving up share prices), the reality is when compared to 2009, households have been a huge beneficiary so far. The disparity between households is another matter, but not relevant for the purpose of this article.

In addition to the flows depicted above (which are only current to the third quarter of 2020), a further $900 billion of additional fiscal support was signed into law in December[4], and the new Biden administration is pushing for an additional US$1.9 trillion of COVID relief[3]. The surge in US household savings is creating a once-in-a-generation recalibration of household balance sheets, similar to the net spending during WW2, setting up the next consumer / economic cycle.

In this context, the surge in equity prices since March is entirely rational.

Fed watching is interesting, but for those who want to focus on macroeconomics, it has always been about fiscal. This will be the big financial lesson in 2020.

The good news for investors is many commentators will continue to cling to long-held beliefs that government deficits are bad, Quantitative Easing is ‘money printing’ and interest rates drive share market returns. Even today, there remain fears that QE and large fiscal deficits may cause inflation[6] – it’s as if these commentators live in a world where the last 30 years of Japanese deflation did not exist.

For investors who include macroeconomics in their thinking, these failed predictions and beliefs are likely to provide windows of market inefficiency to exploit.

How does this affect Quay and our investment process?

At Quay, we believe we have as good an understanding of macroeconomics as most. Understanding Modern Monetary Theory, the accounting realities of central banking, the source of company profits and the sectoral balances are powerful tools.

It is because of our understanding of macroeconomics that we choose not to rely on it, since most of the consequential macroeconomic events occur in politics, which is notoriously hard to predict. Sometimes one must know a topic well to know when it is not helpful.

Our process remains very much bottom up. We continue to seek attractively priced companies likely to benefit from structural long-term tailwinds, with solid balance sheets, good management and sustainable payout ratios. This remains our focus.

But for those who want to play the macroeconomic game, 2020 provides a long overdue lesson. It’s no longer ‘don’t fight the Fed’; but now, don’t ignore the public purse.