Investment Perspectives: Six reasons to not worry about inflation

It’s that time in the cycle again. US bond markets and commentors are worried about inflation. But with US unemployment at 6.2%, should this be a concern?

Before we begin, let’s define what we are actually discussing. Rising prices are a pre-condition for what we define as inflation; but this isn’t the only condition. Inflation is a continuing increase in prices, from one period to the next. Over the next 12 months it is almost certain we will see episodes of rising prices as the dire economic numbers of 2020 ‘cycle out’ of the annual CPI calculation. This will likely drive a lot of ‘here comes inflation’ discussion in the financial media, but it may not mean anything at all until numbers normalise.

In fact, we believe there are a number of reasons to not be too concerned about US inflation in the medium term. We set these arguments out below.

Bond markets are often cited as the smartest money in the room. Recently, they have signalled a very real concern about rising inflation. However, bond investors had the same concern in 2009 – less than 12 months after the financial crisis bond yields were above their pre-crisis levels.

Concern about President Obama’s US$850bn rescue package (American Recovery act) and quantitative easing from the Federal Reserve sparked concern outside the bond market too. In November 2010 an assorted group of economists, journalists and financiers published an open letter to Ben Bernanke, warning the Federal Reserve’s quantitative easing (QE) program would lead to inflation and currency debasement[1].

Of course, these concerns turned out to be at best premature, and in reality, vastly overstated. That’s not to say this time is not different, but we should look beyond the headlines before we get too concerned.

2.     There remains enormous capacity in the labour market

In most advanced economies, the real production of goods and services relies predominately on labour. And while there are many stories of supply bottlenecks and capacity constraints, the broad availability of labour means there are enough real resources in the economy to respond to demand pressures. 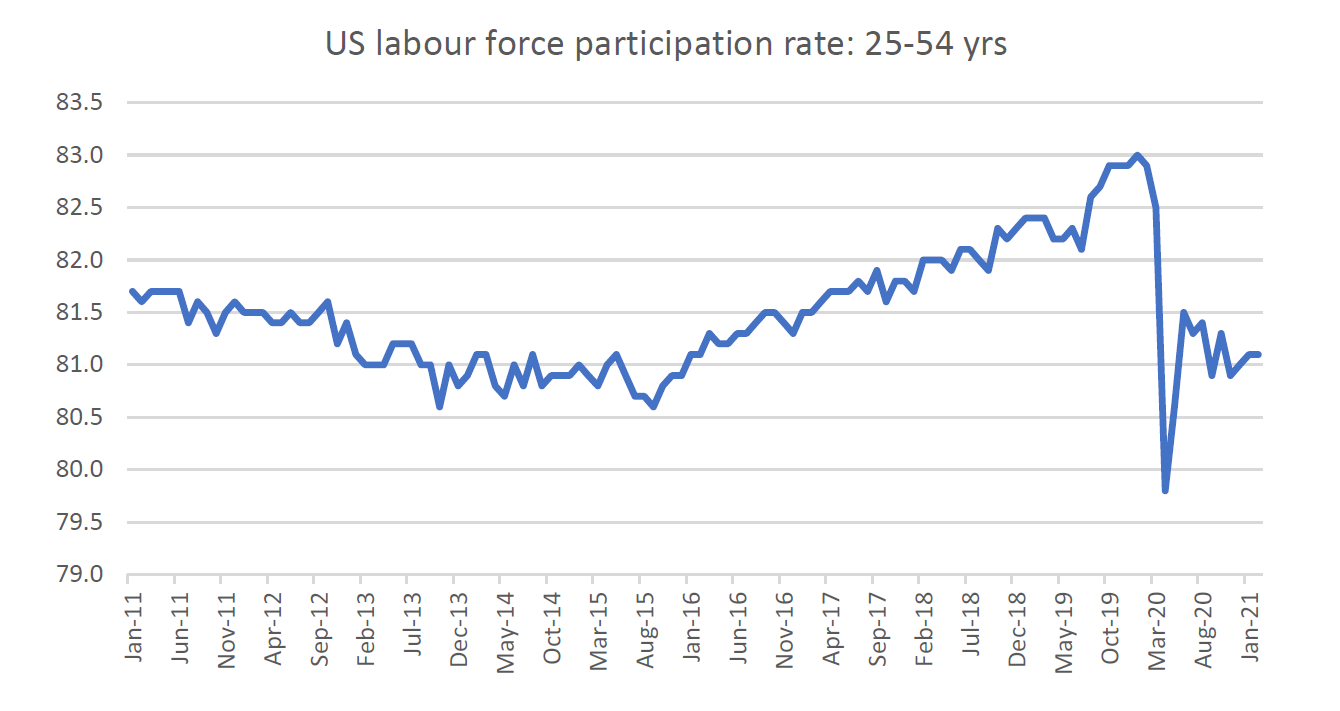 3.     Large components of the CPI basket aren’t rising much at all

Along with commentator concerns regarding ‘copper prices’ or ‘oil prices’ as evidence of imminent inflation, one of the largest components of the US CPI basket is not showing much movement at all.  Around a third of US CPI is rent – either from third-party providers or owner-occupier ‘equivalent’ rent. As a manager of a real estate fund with exposure to US apartments, we can say with confidence a meaningful part of this CPI chart is falling; especially around heavily weighted coastal markets. 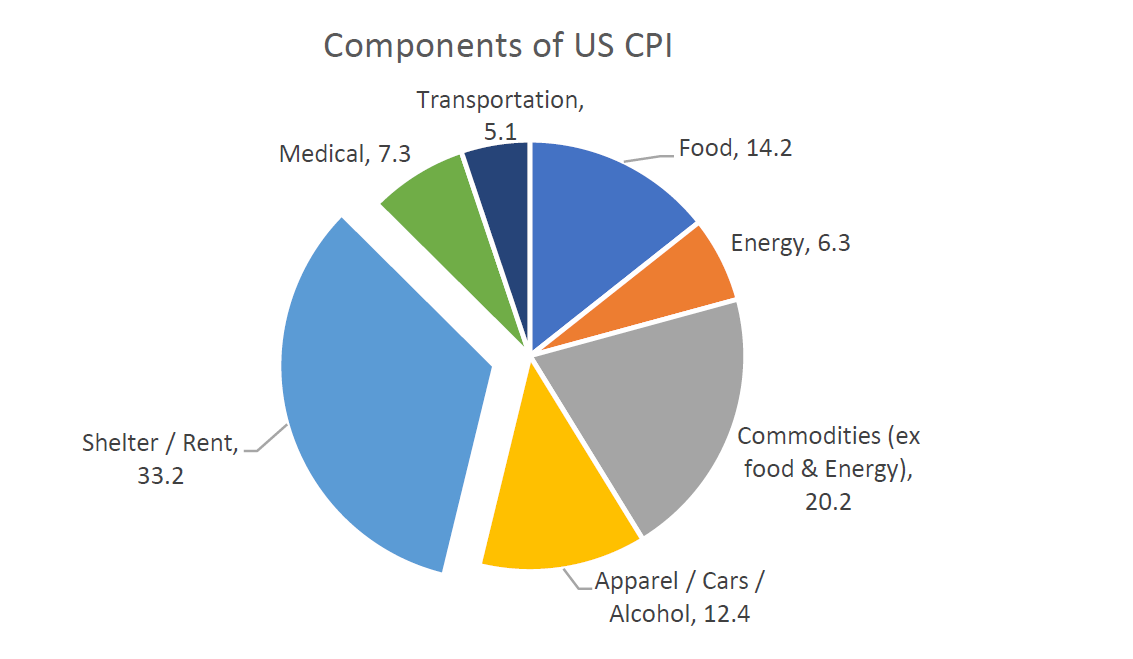 And while single family rents are rising (driven by population shifts from the coast), recent data suggests there is a clear and accelerating supply response – something we should NOT see if inflation were to be an ongoing problem.

4.     US government spending is not that big relative to the economy

One of the interesting observations about the recent $1.9 trillion US government COVID relief package is the debate does not seem to be around ‘affordability’, but the impact on inflation.

As we learned from our series on Modern Monetary Theory (MMT), sovereign currency issuers (like the USA, Australia, UK, Japan) are never financially constrained, but are constrained by real resources (or inflation). Inflationary concerns in this context are justified, especially since the US fiscal response to the pandemic is significant relative to history and relative to other countries. 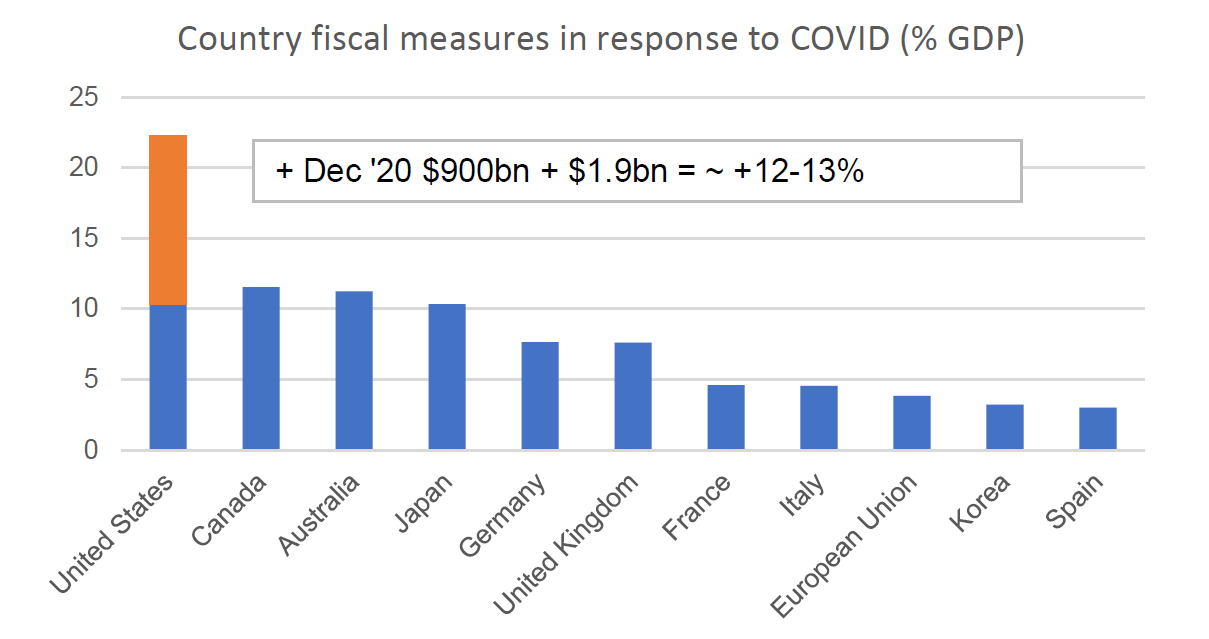 Recent analysis from the CBO projects US government debt to now exceed 100% of GDP, and to remain above this level for the foreseeable future.[2]

Government debt, unlike QE, is an actual source of what others refer to as ‘money printing’. Should we be worried about it? Despite the recent increase in US government debt, the ratio of debt to GDP is still less than half of Japan. As a reminder, Japan continues to fight deflation.

Of course, there is always the “Japan is different” argument, particularly concerning demographics. However, we would argue large fiscal deficits would be more inflationary for a shrinking population such as Japan compared to a growing population like the US (e.g. more fiscal spending per capita).

It is also worth remembering the Bank of Japan has itself conducted various forms of QE since 19 March 2001[3] – around nine years longer than the US or Europe. And yet still, no inflation.

5.     Issued currency does not always get spent

One of the lessons from Japan is that while net government spending accrues as a non-government surplus, it does not follow this surplus will be entirely spent on real goods and services. After the enormous credit binge in Japan during the 1980s, Japanese households pivoted to saving (rather than spending). This saving took the form of de-leveraging from the 1980s credit boom.

As we know from our second article on Modern Monetary Theory (part 2), private sector loans create deposits. Debt reduction from using deposits (from net government spending) destroys loans (and the deposit) simultaneously. This removes liquid financial assets from the non-government sector and is deflationary.

After 40 years of central bank economic management (which encouraged private debt creation), there is plenty of room for the private sector to deleverage, just as Japan did in the 1990s. 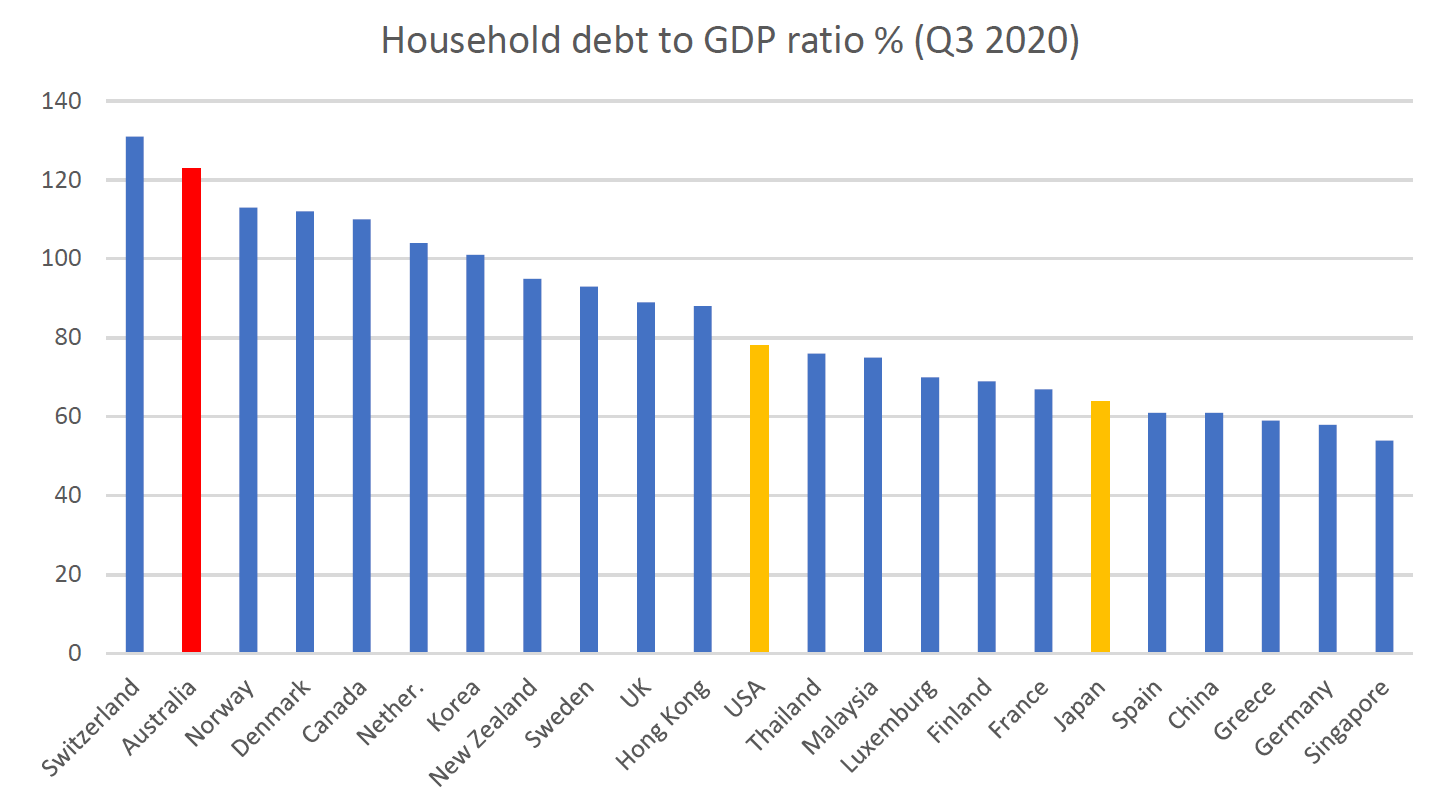 For the best part of 25 years, most central banks have struggled to lift inflation to their target band. In the US, since 1996 inflation has on average been ~80% below the Fed’s target. Furthermore, the evidence suggests the tools of the central bank (interest rates) have been inadequate for the task of inflation targeting. 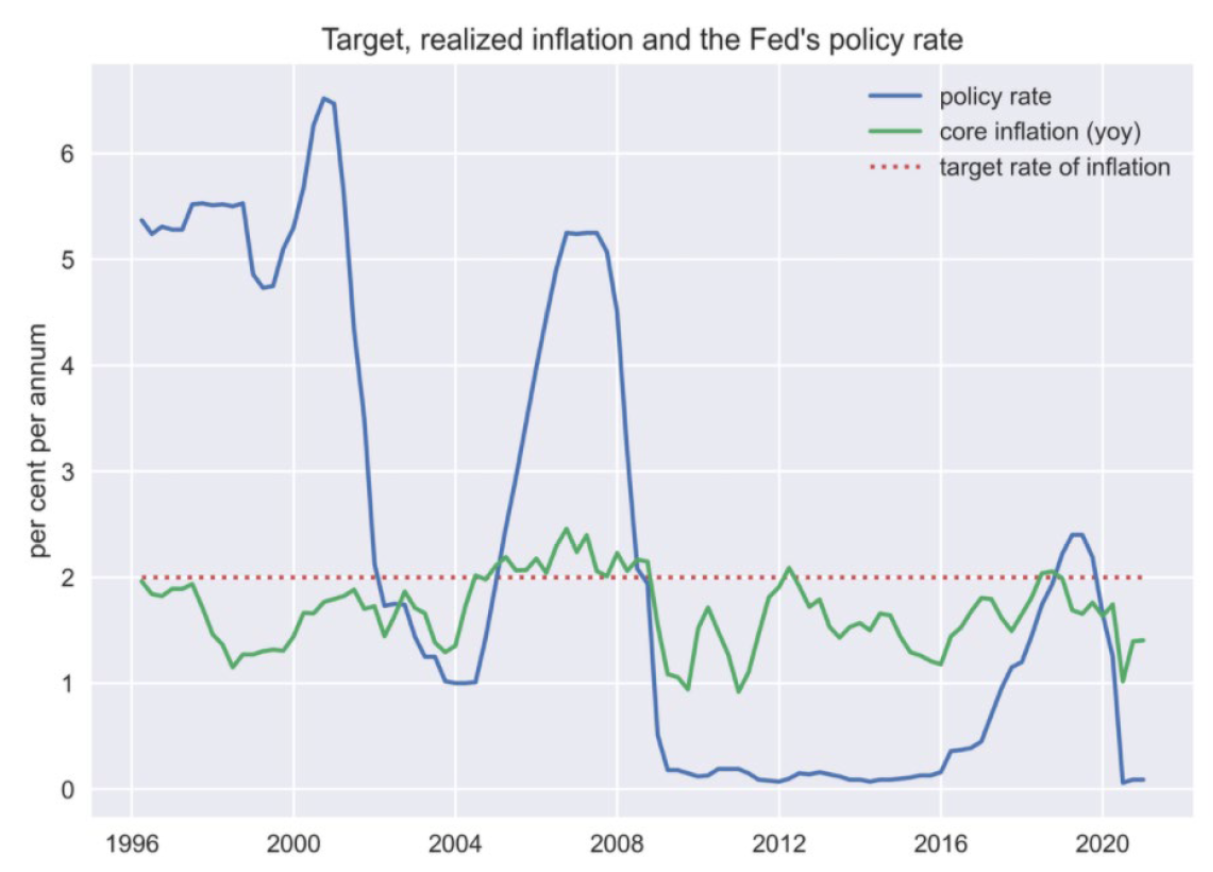 As for quantitative easing, our views are unchanged from our 2016 article Are central banks losing their effectiveness?, where we stated:

“QE has not succeeded because it has very limited transmission benefits. Supplying more ‘money’ to the banking system does not guarantee more money in the economy. Banks do not lend out reserves – reserves are used to meet the payment obligations of bank customers. Further, banks are never reserve constrained when making loans. The lending decision is a credit decision first – funding is sought afterwards and is supplied by the central bank.

Since the economic benefits of QE are limited, it is worth turning to the flow-on effects of this policy. In effect, the central banks are acquiring high quality and relatively high yielding assets with low yielding (0%) cash – and their ‘spread investing’ comes at the expense of the private sector giving up net income.

Nowhere is this more evident than the profit profile of the US Federal Reserve (90% of which is remitted to the US Treasury). The increase in profits since the beginning of QE (2010) reflects lost income from the private sector.

And like most taxes, at the margin, quantitative easing is deflationary.

We will take ‘unders’ in the inflation debate, but we hope we’re wrong

Most financial commentators incorrectly label listed real estate (and direct) as a bond proxy – an asset class that does poorly during rising interest rates. Of course we have highlighted many times why this is not always the case – most recently in our article Revisiting REITS and interest rates.

Yet if investors have a valuation discipline, real estate can do very well in a rising bond yield market – as long as interest rates are being driven by high inflation.

So what is the valuation discipline?

Essentially, this means ensuring the purchase price of the asset is at or below the cost of production rather than pricing assets in relative terms. Over time, (most) real estate trades around replacement cost – under conditions of high inflation, replacement cost simply rises faster, dragging up the capital value of existing assets. This ensures the investor’s real purchasing power is protected from the ravages of accelerating inflation. 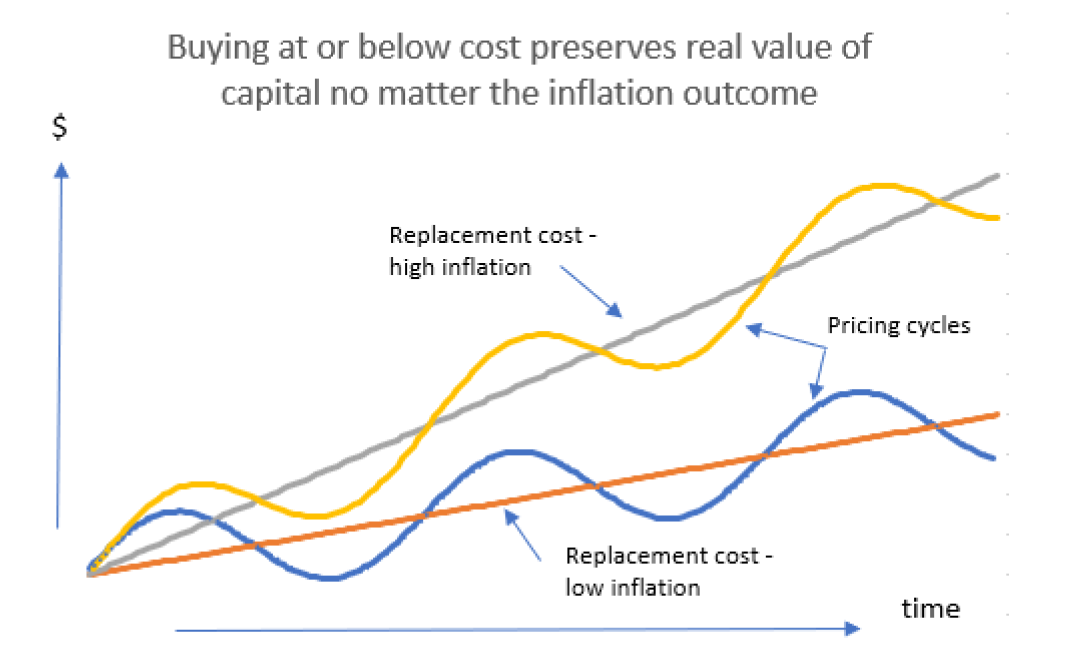 Of course, this is more than just theory. The last period of sustained inflation occurred from the 1970s through to the mid 1980s. Over that period, listed REITs generated attractive real (after inflation) total returns of 7.1% per annum, compared to US equities 1.9%. 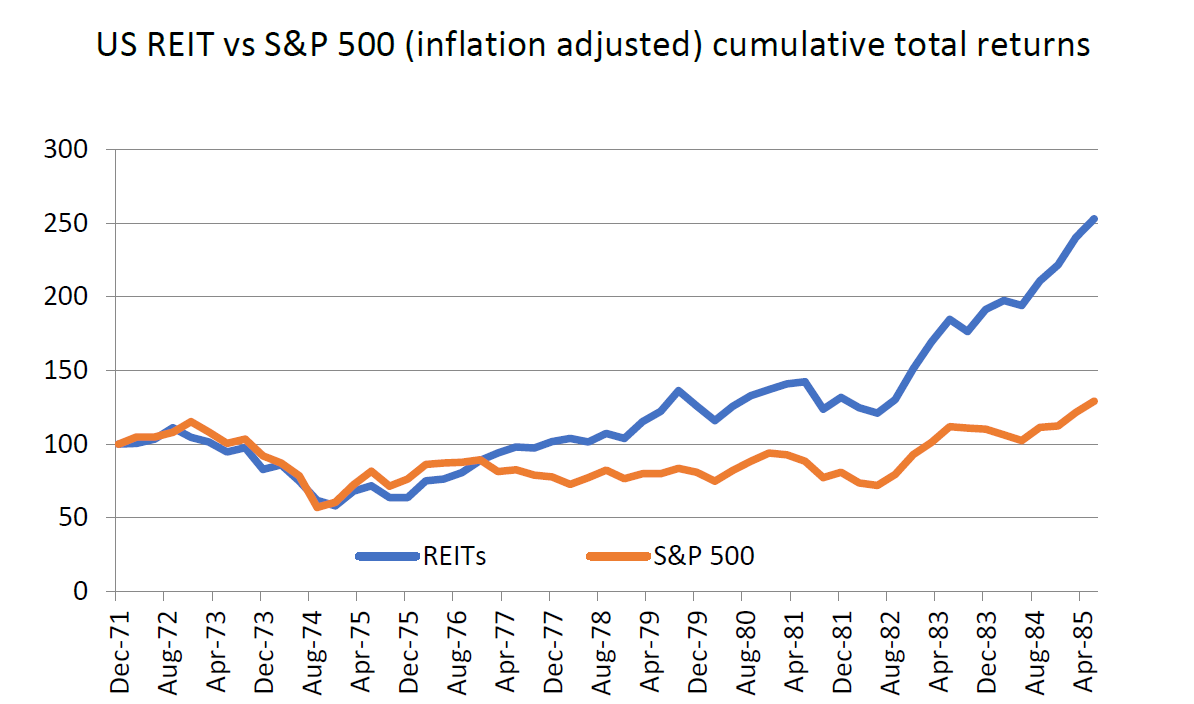 So as someone with a vested interest in the performance and outlook for real estate, if inflation is a real risk, we say “bring it on”. We just won’t hold our breath.