Over the past five years, financial markets have moved in concert with changes in policy from central banks.

Much of the share market recovery since 2009 has been attributed to ‘easy money’ – including the policy of quantitative easing. While the real economic benefits from central bank policy are questionable (US economic recovery has been muted at best), it seems they have not finished with their aggressive approach.

During January, the Bank of Japan (BoJ) moved interest rates (on excess reserves) to -0.1%. And although the BoJ was not the first to enact such a policy, there seems to be a clear understanding central banks are not limited to the ‘lower bound’ of zero.

Part of the statement released by the BoJ said, it “adopted the negative interest rate policy in order to achieve its price stability target of 2% inflation at the earliest possible time”, and signalled that it will cut the interest rate further into negative territory, if judged necessary.

The question is, will it work? We think not.

In Sweden, the country’s central bank, the Riksbank, has had an interest rate of

-0.35% since the beginning of 2015 in an effort to boost inflation. That requires banks to charge a deposit rate of -1.1%, because Swedish interest rates move in a lock-step corridor.

Even with a -1.1% deposit rate — the lowest in the world — inflation hasn’t budged and sits at +0.1%, still significantly short of the central bank’s 2% inflation target.

After almost 20 years of near zero interest rates, Japan continues to experience very low inflation (and in some cases deflation). Why does the BoJ (and other central banks for that matter) believe low interest rates will assist recovery and therefore inflation?

The key is understanding the transmission mechanism of monetary policy.

Low interest rates by themselves have very little economic impact. Bank balance sheets must balance (i.e. assets = liabilities plus equity), then lower costs on loans are offset (to the dollar) by lower income rates on deposits, and or bank margins.

The main stimulus from low interest rates is new loan demand, which are used to acquire assets or goods and services in the real economy. It is the newly created money (and demand) that is the stimulus.

For 25 years, monetary policy has been the main tool used to manage the economy, encouraging businesses and households to borrow. As private debt increases, future demand for debt diminishes. There is only so much debt the private sector is willing to take on. And only so much credit banks are willing to offer. At very high levels of private debt, lower interest rates begin to lose their effectiveness.

The following chart highlights the Household Debt to GDP ratio for the major economies. These ratios have been increasing over the past several years as progressively lower and lower interest rates encourage more private credit creation. There is, however, a limit. 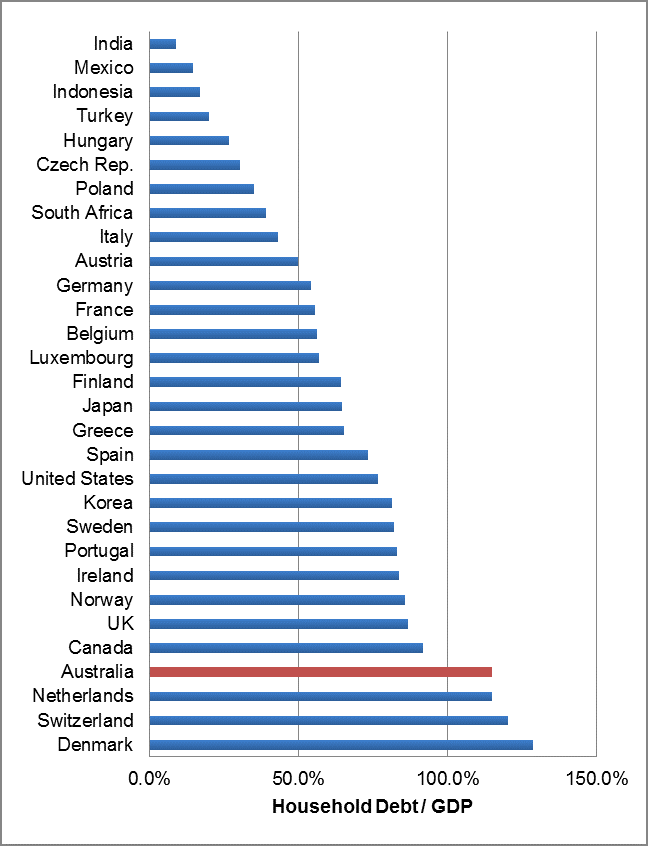 As world economic growth continues to muddle through, policy makers turn to the one tool which has served them so well in the past: interest rates. However, if banks are unable to source significant credit worthy customers, or the private sector is unwilling to borrow, then the level of interest rates becomes irrelevant. New credit will not form, and monetary policy loses its effectiveness.

As central banks grapple with an unresponsive economy, they have turned to unconventional policies. Specifically, quantitative easing and negative interest rates. We view both of these policies as quite harmful and, at the margin, deflationary.

Banks hold cash (sometimes called reserves) at the central bank – in the same way households and businesses hold cash at their bank. The cash held by banks is used primarily to settle transactions on behalf of customers. For example, if customer A transacts with Customer B, payments will be made between these two parties – and separately their banks will match their payments by transferring their cash (reserves) at the central bank.

It is effectively a tax. And for anyone paying attention to global bank share prices recently, the tax is being borne more by the banks than their customers.

Like all taxes, negative interest rates withdraw income from the private sector and therefore acts as a mild deflationary force - the complete opposite to theory and central banks’ expectations.

Reducing interest rates below zero to lift inflation is akin to a hairdresser complaining, “no matter how much I cut, it’s still too short”.

QE relates to unconventional monetary policy in which a central bank purchases assets from the public for cash. The objective is to lower interest rates, and increase money supply.

The economic benefits of QE have been limited. Japan introduced the policy in March 2001 with limited success. And to date, European and US style QE has failed to deliver the economic boost required for a full employment recovery.

QE has not succeeded because it has very limited transmission benefits. Supplying more ‘money’ to the banking system does not guarantee more money in the economy. Banks do not lend out reserves – as discussed above, reserves are used to meet the payment obligations of bank customers. Further, banks are never reserve constrained when making loans. The lending decision is a credit decision first – funding is sought afterwards and is supplied by the central bank.

Since the economic benefits of QE are limited, it is worth turning to the flow-on effects of this policy. In effect, the central banks are acquiring high yielding assets with low yielding cash - and their ‘spread investing’ comes at the expense of the private sector giving up net income.

Nowhere is this more evident than the profit profile of the US Federal Reserve (90% of which is remitted to the US Treasury). The increase in profits since the beginning of QE (2010) reflects lost income from the private sector.

In other words, QE is a tax. 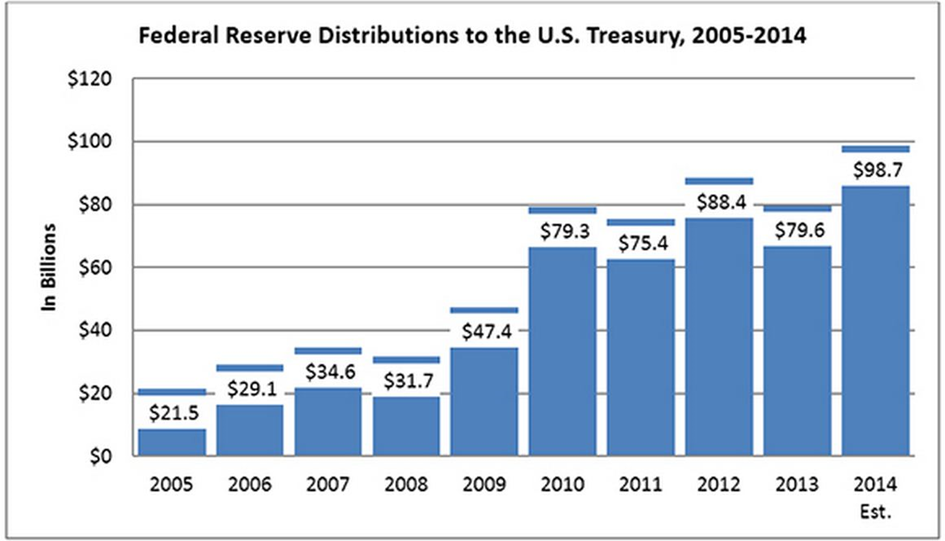 Since the Global Financial Crisis there has been somewhat of a cottage industry forecasting the next ‘black swan event’. Most of these predictions are based on another debt crisis – a function of recency bias in forecasting.

However, since most companies and households have memories of what excessive debt can do, it is unlikely a debt crisis will re-emerge so quickly. We see this almost every day in the companies we cover. Leverage has reduced, pay-out ratios have declined, and companies are keeping high levels of liquidity available, despite the cost. It seems to us the next shock is likely to arrive from a surprising source.

We think one of these sources could be the loss in confidence of central banks. It seems clear to us recent policy initiatives like negative interest rates and QE have had limited economic benefit. And when one works through the mechanics and operational realities of these policies, it seems even clearer that they act as a drag on economic performance. Central banks are out of ammunition, outside of the placebo effect of being seen to be doing something.

But the positive effects of a placebo do not last forever.

It really is only a matter of time before markets accept the true limitations for monetary policy. The loss in confidence of the Bernanke / Yellen / Draghi put option could cause significant market disruption.

For global real estate investors, there may be a temptation to allocate to Japanese real estate companies on the back of the BoJ’s announcement and subsequent comments. After all, lower interest rates mean lower discount rates, and therefore higher NPVs and prices.

At Quay we think the monetary system is more dynamic than this. Lower interest rates in Japan, where savings rates are very high, will reduce private sector income, and therefore reduce aggregate demand. This will have a real and negative impact on the economy and real estate.

The Quay Global Real Estate Fund has a zero exposure to Japan. We continue to believe there are better global opportunities elsewhere.

The content contained in this article represents the opinions of the authors. The authors may hold either long or short positions in securities of various companies discussed in the article. The commentary in this article in no way constitutes a solicitation of business or investment advice. It is intended solely as an avenue for the authors to express their personal views on investing and for the entertainment of the reader. In particular this newsletter is not directed for investment purposes at US persons.