One of the advantages of a global mandate is the opportunity to identify and invest in some of the most unique and best run real estate companies in the world.

Opportunities including student accommodation, manufactured housing and data storage can be difficult to access with a domestic mandate.

Sometimes, however, attractive investment opportunities can be found much closer to home. We believe one such opportunity is Scentre Group.

Scentre Group (SCG) is the Australian owner and manager of Westfield branded shopping centres (malls) located across Australia (35 properties) and New Zealand (5 properties). The business was formed after the restructure of Westfield Group and Westfield Retail Trust in 2014, in which the non-Australian assets remained with Westfield and are now part of Unibail-Rodamco-Westfield.

SCG not only retained the Australian and New Zealand assets with third party capital partners (approximately A$14bn under external management), but also the senior management, leasing, design and development team. While the Group was formed in 2014, its legacy and history stretch back to the formation of Westfield Development Corporation in the 1950s[1].

Among the G20 nations, population growth in Australia is the third fastest, averaging 1.5% per annum over the past 20 years[2]. If this continues, as well as inflation averaging 2.5% and real consumption increasing by 0.5%, then nominal retail sales should grow, on average, at 4.5% per annum. Compounding over 10 years, total retail sales would increase from $310bn today to almost $500bn by 2028. This leaves a staggering +$170bn of incremental retail sales available between landlords and e-commerce participants (Figure 1). 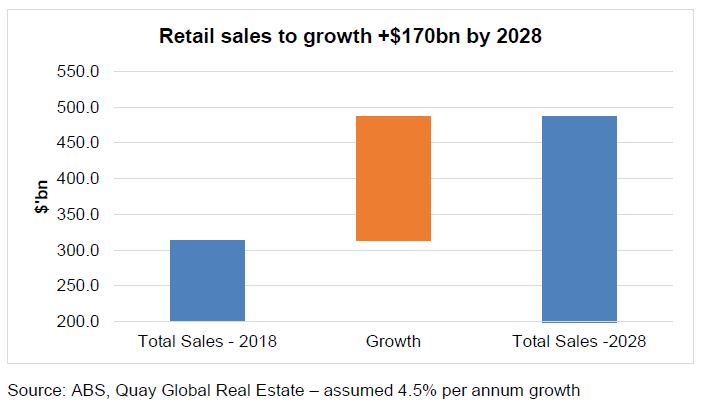 According to the Australian Bureau of Statistics, pure online retail in Australia is currently $6bn – less than 2% of total retail sales. Even after allowing for significant growth of 20% per annum, over 10 years this would increase to $40bn, still leaving an incremental +$130bn for traditional brick-and-mortar retail.

The first reaction to our thesis is typically “is online retail a threat?”. This is a natural question given the recent arrival of Amazon in Australia. However, our thesis is that, over the medium term, the success of online retail will not impede the business case for best-in-class shopping centres.

We are already seeing this in the data across Australia. Figure 2 highlights that the top 10 and top 20 Australian shopping centres measured by total retail sales continue to grow at a greater rate than “system sales” as measured by moving annual turnover (MAT). Or to express it another way, the most productive malls in Australia are gaining share. 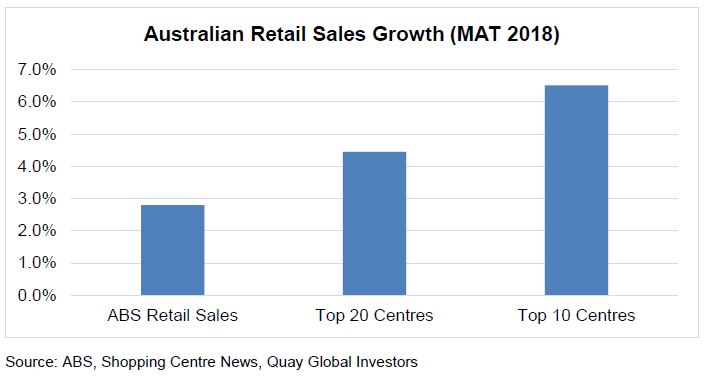 And who owns these malls? As highlighted in Figure 3, Scentre Group owns and operates eight of the top 10 and 13 of the top 20 malls across Australia. Moreover, the group has a further three properties just outside the top 20, with the capability to enter the top 20 in the future via redevelopment. This represents potent market concentration and therefore long-term pricing power. 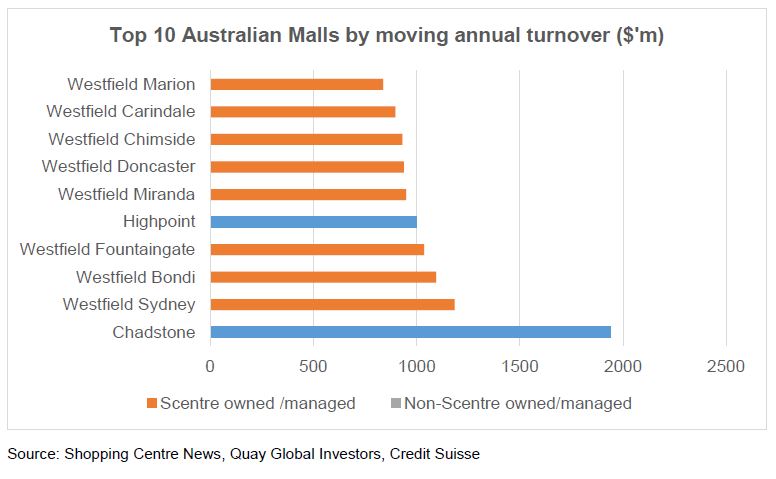 If best-in-class malls and e-commerce are the winners, who are the losers? We can look overseas to help answer this question.

In the US, higher quality malls (typically measured with high sales/sqft) continue to perform well. It is the malls with lower productivity and weak demographics that are facing meaningful rental declines, as demonstrated in Figure 4. 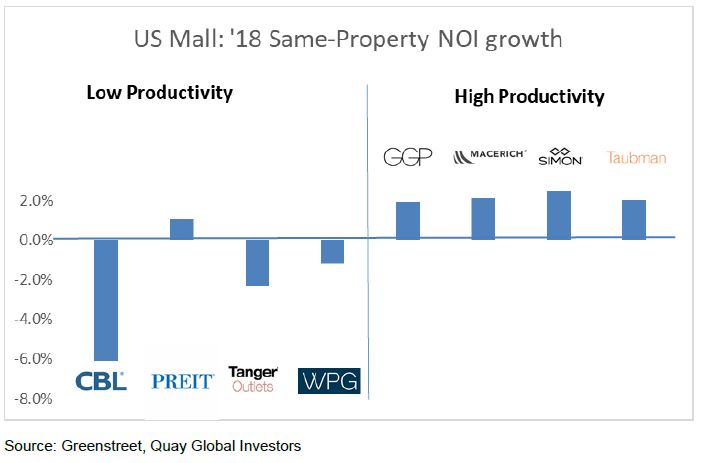 Based on current data, best-in-class malls (say the top 25 shopping centres across Australia) and e-commerce (including omni-channel strategies) represent a fraction of the addressable market (see Figure 5). Both strategies are likely to grow at the expense of weaker distribution channels – however, unlike e-commerce businesses, for best-in-class landlords there is no need to pay nose-bleed investment multiples. 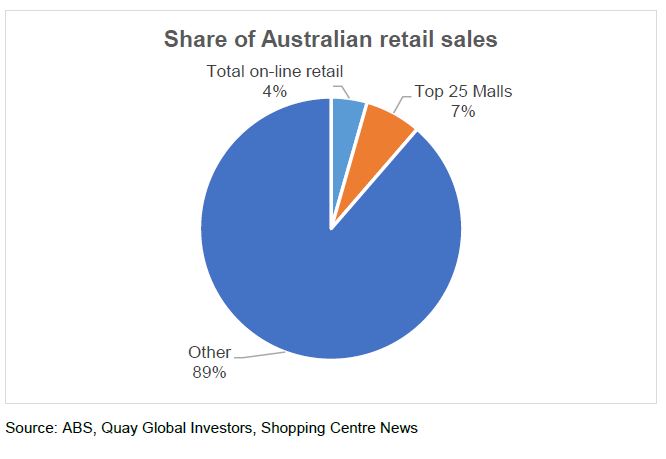 SCG and the legacy Westfield business built a best-in-class mall portfolio though acquisition and re-development. Over the past 14 years, Westfield/Scentre has redeveloped 29 of these properties, that resulted in:

The fact that these development margins have been sustained over the past 14 years speaks to a ‘technology’ in design, construction and leasing that has not been eroded by competition. In other words, Scentre Group has demonstrated a sustained barrier to entry. 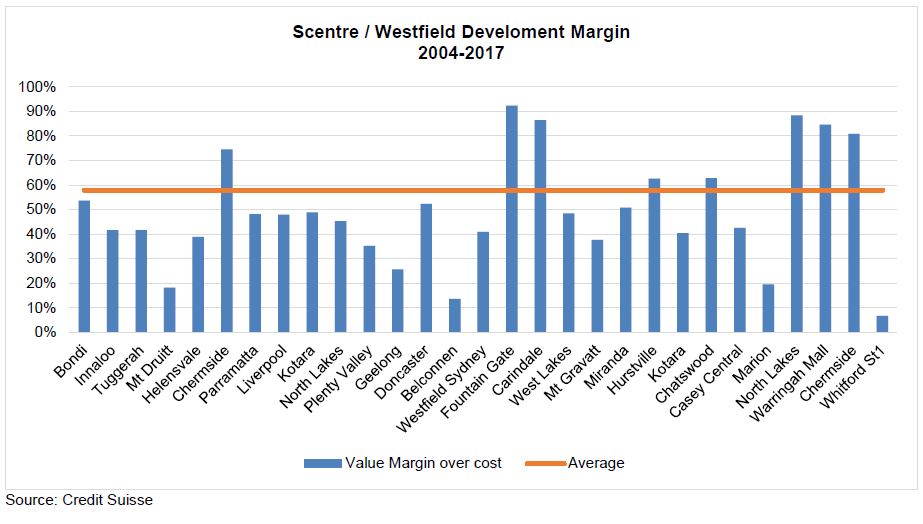 The development margins displayed in the chart above calculate the capital gain (unrealised) for each incremental dollar invested in each project. It reflects the fact that the return on capital is higher than the average applied capitalisation rate for each asset.

In the world of investing, this is simply a measure of economic value add (EVA) – where the marginal return on capital exceeds the weighted average cost of capital. In real estate, this dynamic is rare since most forms of real estate are commodity in nature (low barrier to entry) and prices eventually ‘mean-revert’ back to replacement cost. In other words, for commodity style assets to capture the gain on development, the asset needs to be sold on completion (industrial and office assets are good examples).

However, Scentre Group’s underlying real estate is extremely difficult to replicate. It is more accurately described as a franchise. Scentre’s development capability reflects a business that adds to shareholder value over time. As such, the investment case for SCG is less about ‘buying cheap’, and more about sustainable total returns.

Regular readers will know we aren’t optimistic about Australia’s current macroeconomic environment. Our previous publications have argued that Australia's household debt levels are a risk to the wider economy, and long term there is a case that Australian interest rates could head to zero.

With a global mandate, why bother investing in an Australian retail landlord? 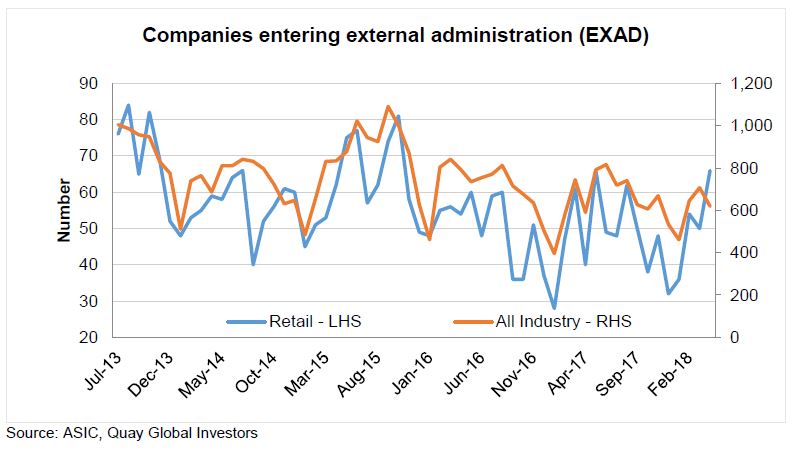 To further explain this final point: around 97% of SCG’s income is derived from base rents. Therefore, there is almost zero near-term correlation between retail sales and rents. However, sustained decline in sales will cause retailer distress, with some potential bankruptcies leading to vacancies across the wider industry.

In the event of a significant economic downturn we expect it will be the shareholders in the retailers that will bear the brunt of the decline in sales and margin. Resultant store closures and bankruptcies are more likely in the weaker, less productive malls. Why? Because without access to the best physical locations with the highest footfall and dollar volume in the country, retailers (and their creditors) will have no ‘business’ when the economy recovers. Scentre’s assets provide critical infrastructure for local retailers to survive the downturn so as to profit from the recovery.

Apart from Intu, the ’cheaper’ landlords are all US centric – where the amount of retail space per capita is roughly double compared to Australia[3] and hence vacancy risk and capital expenditure requirements are higher. In our view, Scentre Group is more comparable to Unibail (UL) and Klepierre, a French mall landlord, given the concentration of best-in-class malls. And if Scentre Group were to trade at similar multiples it would imply a share price of A$5.00 (Klepierre) - A$6.05 (Unibail).

This relatively good value does not mean Scentre has performed poorly. We know this since SCG is the only Global Mall REIT the Quay Global Real Estate Fund has owned since inception. Figure 9 shows how it performed over this timeframe. 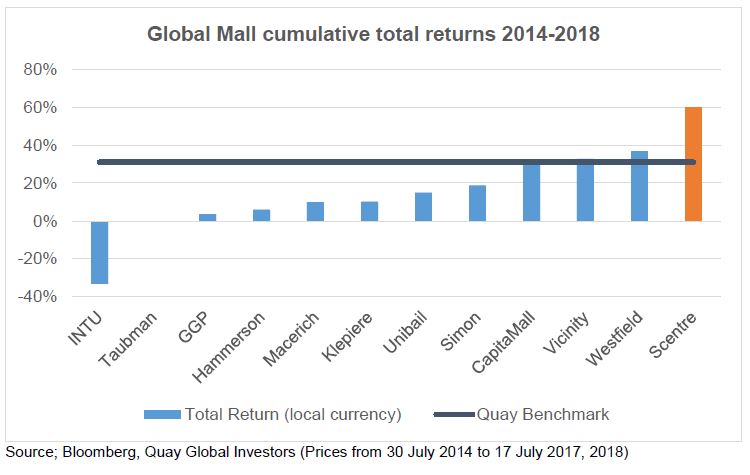 By a considerable margin, SCG has been the best performing Global Mall REIT in our sample set. More importantly, it has easily exceeded Quay’s cumulated benchmark return of CPI +5% per annum.

The point is that although SCG has materially outperformed over four years, today it still offers relatively sound value. It simply has not progressed from cheap to expensive, forcing us to consider other investment options. This is because the business model is designed to incrementally add value every year via re-development and repositioning with best-in-class assets.

We find this a much better way to invest than to try to buy cheap stocks and hope someone will pay an expensive price at a later date. The world has a limited supply of greater fools.

Scentre Group represents the type of investment we seek at Quay: a business with a great pedigree and strong history of adding value, that can be acquired at a reasonable price and has room to perform in the short term (because the value equation is supportive) and long term (the business incrementally adds value every year). Further, SCG is supported by long-term favourable demographics.

The business has demonstrated sustainable barriers to entry, has a robust balance sheet and is now moving to a sensible dividend pay-out ratio (85% of earnings). Meanwhile, if economic calamity does arrive on our shores, Scentre’s resilient earnings – supported almost entirely by base rents – will mitigate against the downside risk of permanent capital loss.

We find retail property one of the least understood asset classes across the real estate spectrum. In the past decade or so there was a lack of differentiation in multiples (cap rates) between best-in-class and lesser quality properties. That is changing, and ’value’ investors are now paying the price. This will benefit Scentre because, in our view, its portfolio quality and business model stand well above its domestic and global peers.