Chris Bedingfield takes a look at 10 interesting charts right now that show the impact of COVID-19 across sectors and countries.

Is government debt bad or good? 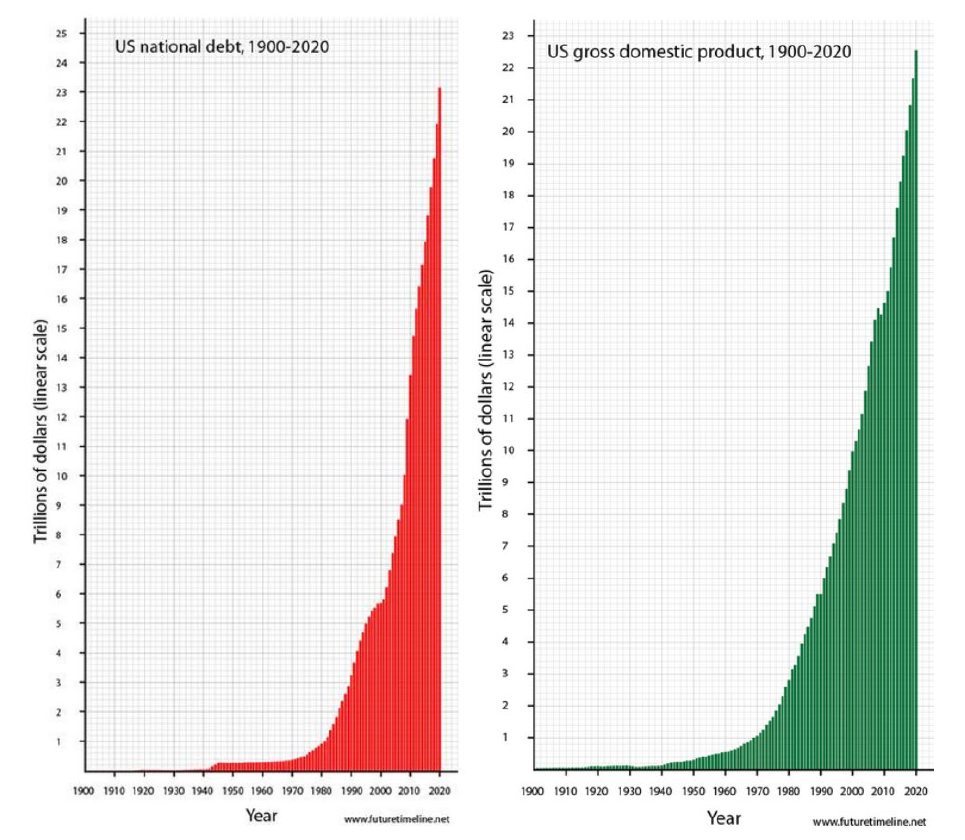 The government fiscal response to COVID-19 and the associated forced shut-down of the economy has been significant. In our view, there is little doubt these policies have helped companies and households navigate the crisis (and therefore in turn, support equity prices).

The risk now is that governments fret the deficits are too big, forcing grandchildren to ‘pay back’ the debt into the future.

However, as the chart above demonstrates, accumulated debt does not impede growth or force grandchildren into servitude – if anything, ongoing deficits create the money that greases the wheels of the modern economy. Investors should not fear government debt – they should welcome it. 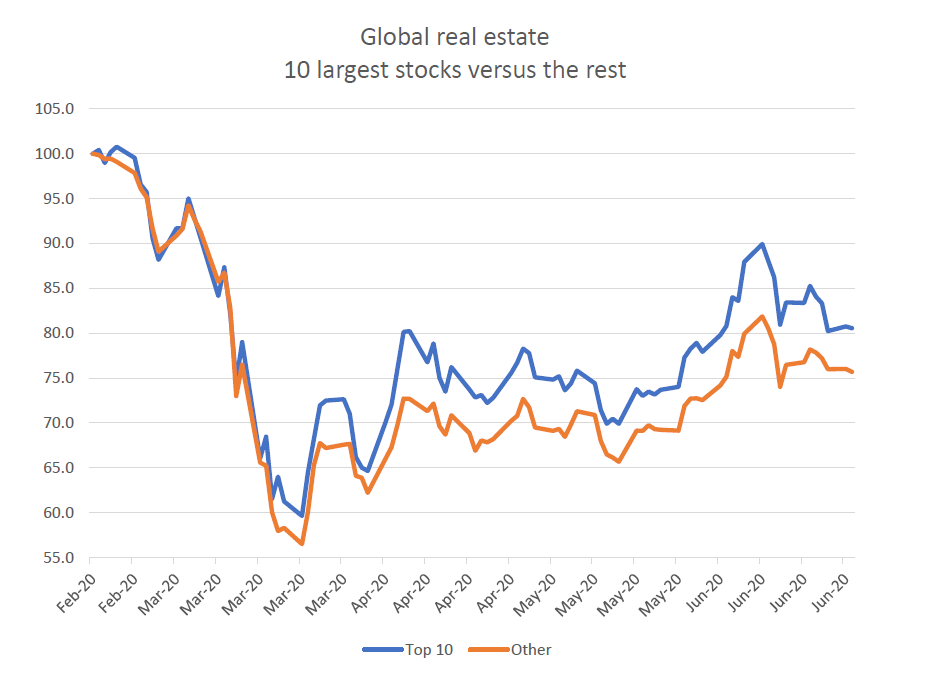 While global real estate has lagged the equity market recovery, within the sector large caps (defined as the ten largest global REITs) are doing better than mid and small caps. Composition is not playing much of a role either, as large caps include Simon Property (US Malls), Equity Residential (US Apartments) and Mitsubishi Estate (Japan developer), which are in some of the hardest hit sectors.

A similar story is playing out in equities, suggesting size and momentum are playing just as important a role as ‘sector themes’.

Build it, but will they come? 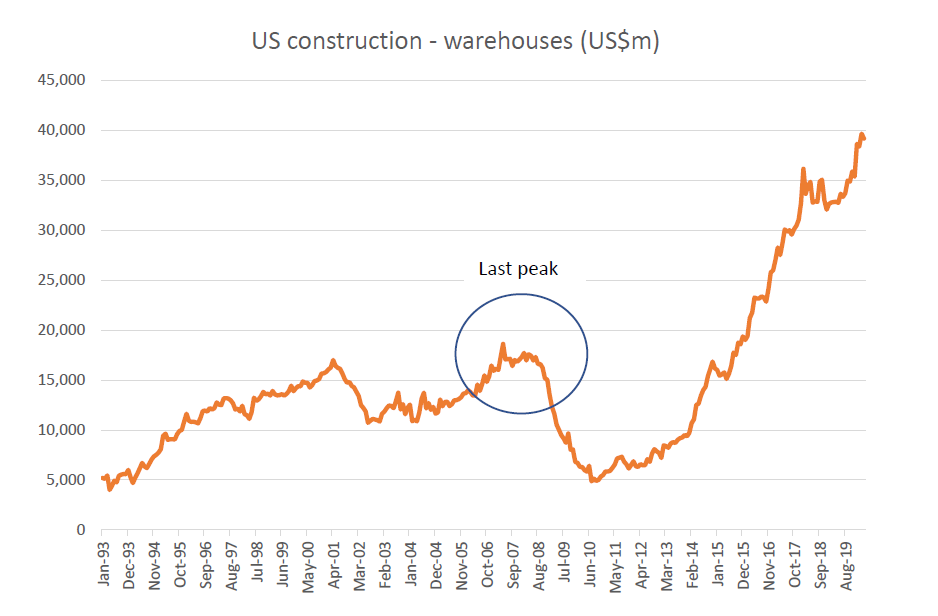 While on the topic of themes, working from home and isolation have driven short-term demand for e-commerce as physical stores are forced to close. The common narrative is that COVID-19 will be good for industrial / logistics due to greater tenant demand for accommodating larger volumes to manage supply chain risk, and burgeoning online demand. In short, the demand story sounds great.

But is anyone looking at supply? What could possibly go wrong?

Diners are coming back – although not everywhere 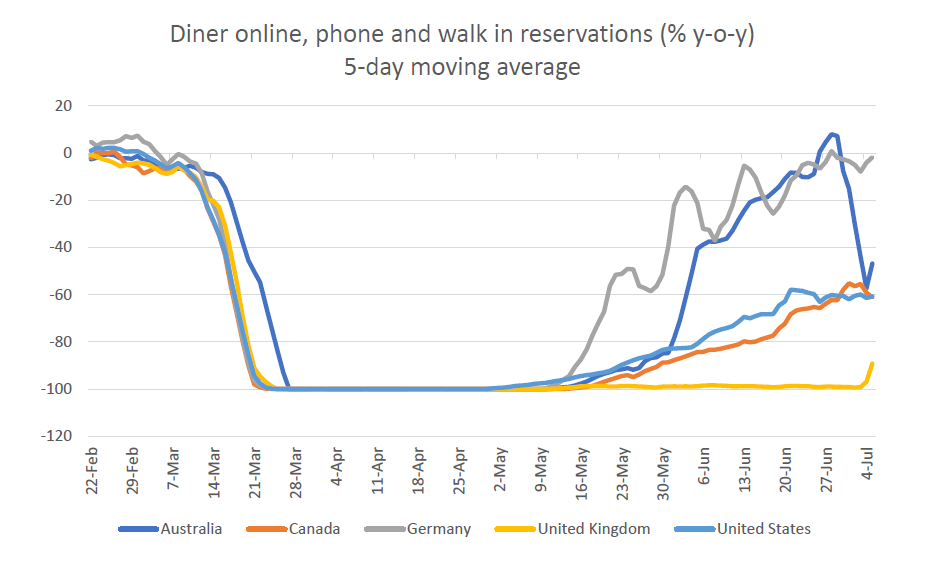 Until recently, the data suggested Australian restaurant demand was back to pre-virus levels. However, the recent surge in COVID-19 cases (especially in Victoria) has resulted in a sharp reversal.

Conversely, Germany (where infection rates are relatively well-contained) appears to be doing better than most.

The lesson? There is some correlation between the recovery in dining bookings and how well countries managed the spread of COVID-19. If this translates into the broader economy, it is probably good news for Germany. Pretty dire news for the UK. 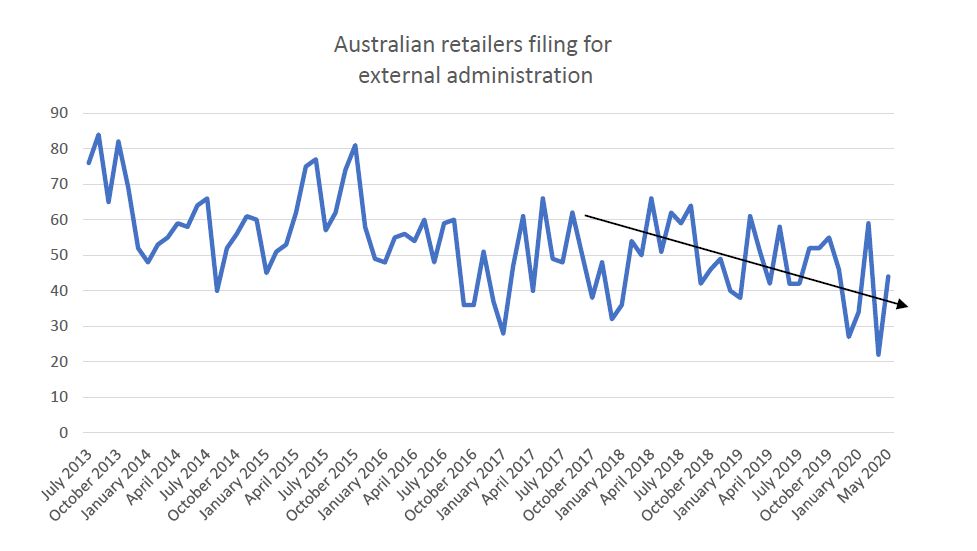 If one was to rely purely on the headlines, one would believe most Australian retailers have filed for bankruptcy (or will soon). While it is early days, the data to May suggests the retail industry was in pretty good shape coming into the lockdown. Further, recent data suggests May retail sales were around 5.3% higher in 2020 versus 2019, suggesting support for the broader retail industry.

No catastrophe yet, but something to monitor in the coming months.

In fact, retail was outperforming the economy

This chart measures the total number of companies (by industry) that filed for external administration over the past 12 months, versus the 12 months prior.

Not only were retail companies that faced financial distresses trending down, but the industry was outperforming other major sectors and employers. Issues relating to construction most likely reflect the downturn in new housing approval and starts.

Clearly the retail industry was in good relative shape prior to the downturn (contrary to widely accepted commentary). 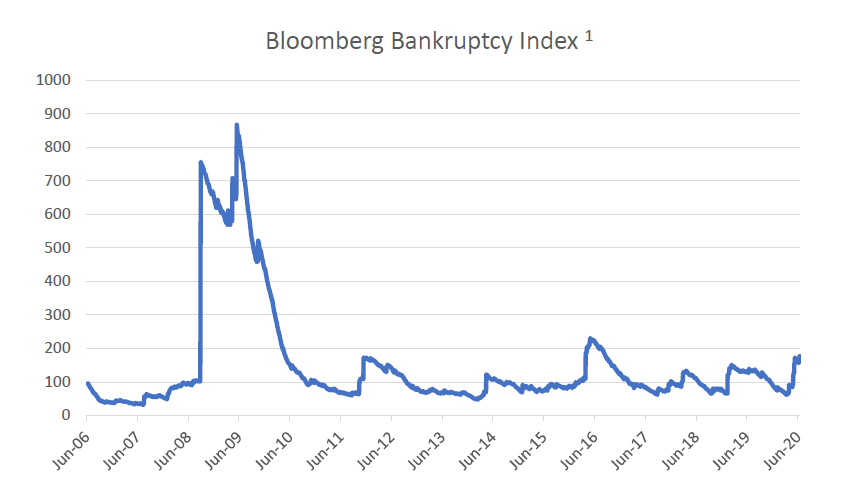 Another interesting chart that may explain part of the equity market resilience. Bankruptcy will always dominate the headlines, but as ever, it’s the data that matters. Based on this measure (daily data to 29 June 2020), US bankruptcies appear no worse than 2016 levels, but significantly below 2008 and 2009 peaks. Note the data relates to companies with more than $100m of liabilities, so it may mask bigger problems for smaller companies.

Less bankruptcies increases the likelihood of a rapid re-hiring environment, thereby minimising the economic downturn. Again, it’s early days, but this suggests the proactive fiscal and monetary support enacted in March is doing the trick.

The Fed does not influence long-term returns 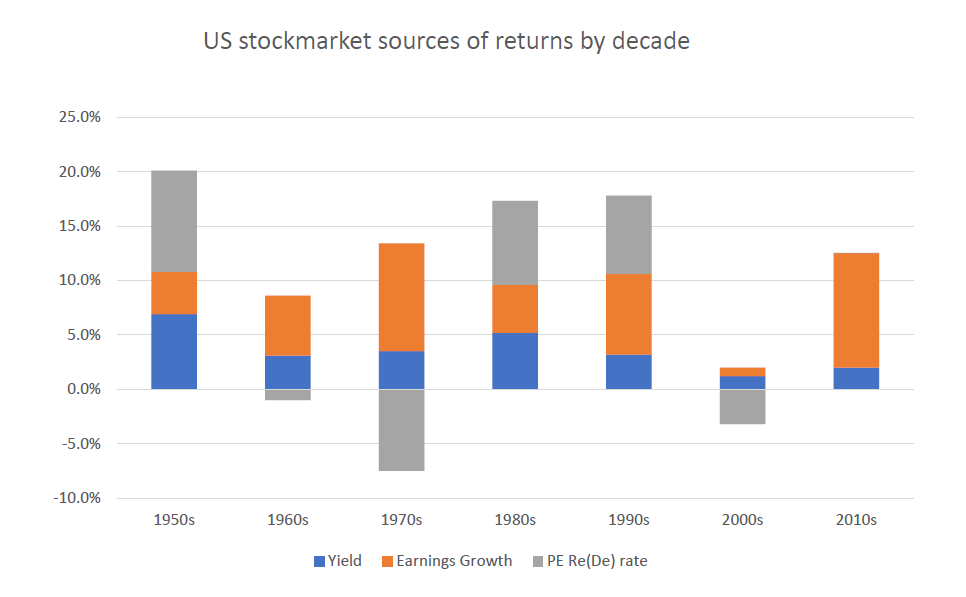 All too often we hear day-to-day sharemarket returns are influenced by central bank action: ‘flooding the market with liquidity’ to drive up share prices.

But in the decade where the US Federal Reserve was most active with asset purchases (2010s), nearly 100% of the total return could be explained by dividend yield and earnings growth. There was no PE rerate benefit, despite the secular fall in interest rates over the decade.

This is an important observation in the current environment. Too often the Fed and low interest rates are blamed (or credited) for market performance, when the reality is that returns come from earnings growth and dividends. Investors would be wise to spend more time thinking about company prospects than central bank actions.

It really is different this time 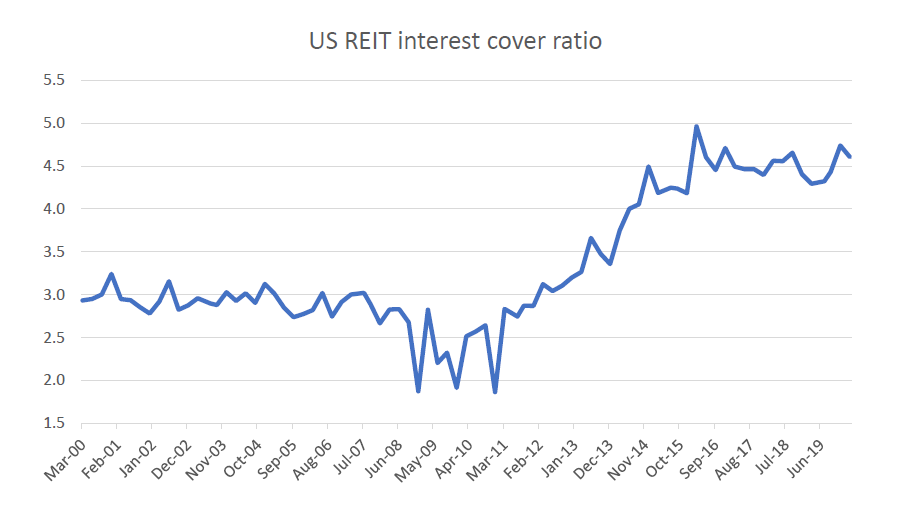 As markets reacted to the pandemic, listed real estate underperformed the broader equity market. As we discussed in last month’s Investment Perspectives, part of this underperformance may reflect the recency bias relating to the sector’s underperformance during the financial crisis or the headlines about rent strikes. However, most REIT balance sheets are in much better shape this cycle as measured by interest cover.

Of course, low interest rates have helped, but most companies have spent the last decade reducing overall leverage as a result of the lessons learned during the financial crisis. This has been especially true in the industrial, storage, and residential sectors.

It’s all about e-commerce … or is it? 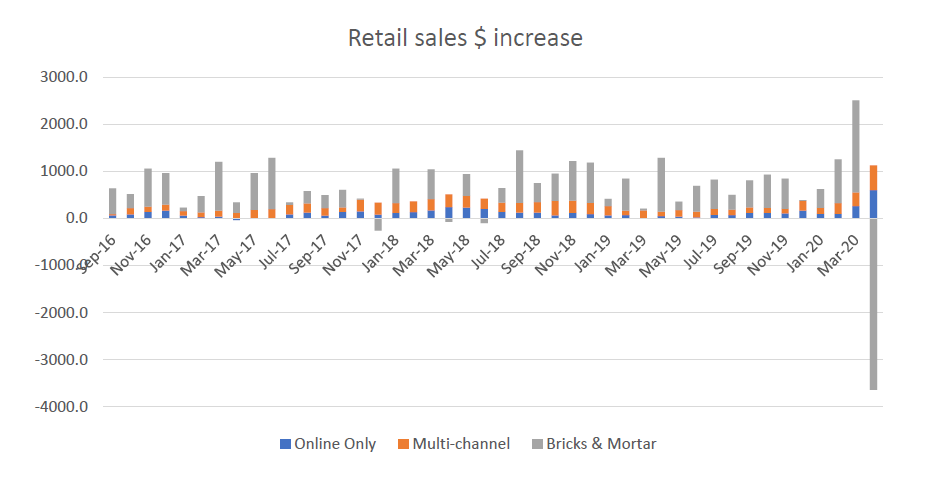 If Jeff Bezos had a utopian wish at the beginning of this year, it would have been for governments to:

It’s no surprise that recent retail sales have been dominated by online purchases. However, a deeper look (thanks to the ABS) shows multi-channel sales (which includes bricks and mortar) are just as important as pure e-commerce retail. As the economy reopens and investors abandon bricks and mortar retail, this is a trend worth watching and may point to some interesting investment opportunities.

[1] The Bloomberg Corporate Bankruptcy Index measures both the occurrence and severity of current and recent US bankruptcy activity for corporations with at least $100 million in reported liabilities. The index is a barometer of bankruptcy activity that equally considers the number of bankruptcies and the US dollar amount of liabilities relative to their 2000 to 2012 medians, which are set at 100. Each known bankruptcy observation is discounted daily from a full weighting to zero over the following year.