The study of populations is integral to real estate. Unlike the speculation, opinions and decisions of the most powerful in the world, nothing can stop the effect of demographics on the economy – it is the slow-moving beast that influences demand and thus resource allocation.

The study of populations, how and where people move, is integral to real estate. Unlike the speculation, opinions and decisions of the most powerful in the world, nothing can stop the effect of demographics on the economy – it is the slow-moving beast that influences demand and thus resource allocation.

At Quay, we keep a close eye on demographic changes across the world to find new trends to exploit as investors – or to confirm existing ones. We’ve previously written about demographics, and this article outlines similar trends and observations given statistical agencies around the world update population projections every four or so years. These projections normally change at the margins, save for changes in immigration policy or ‘transformational’ events like war.

Our update has three sections:

This story is presented through charts, so while this article is quite voluminous, it is easy reading. 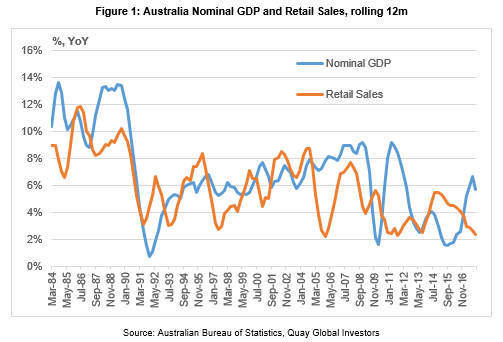 Nominal GDP growth is driven by population, prices and productivity. Given constant productivity growth over time, we identify the major drivers of retail sales as prices and population growth – as well as, specifically for retail, internet penetration (‘bricks-and-mortar’ market share).

The ABS releases ‘experimental’ online retail estimates, which break down domestic online retail sales to ‘pure-play’ (online only) and ‘multi-channel’ (online and physical store). The real threat of online retail we are concerned with is pure-play, as multi-channel almost always involves the use of physical real estate to facilitate a transaction.

The estimates show that multi-channel online sales are increasing and make up the majority of online sales in Australia (Figure 2). 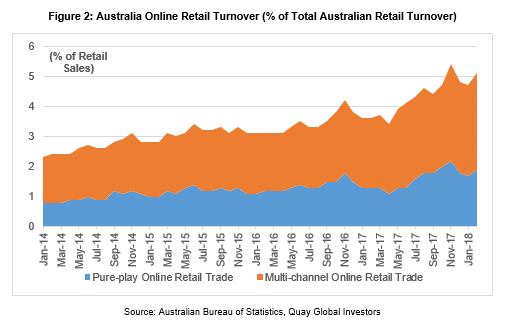 Given we can’t forecast prices, this leaves population growth and productivity (Figures 3 and 4). 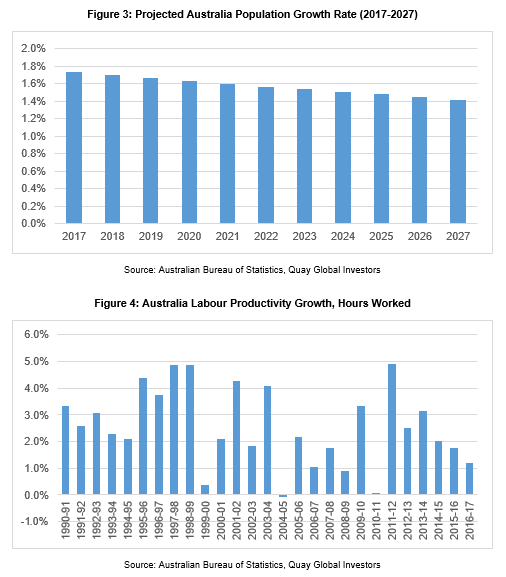 Retail sales growth has averaged about 4% since 2004. As above, the population is projected to increase at a diminishing rate, but growth is still expected to be 1.4% in ten years’ time. 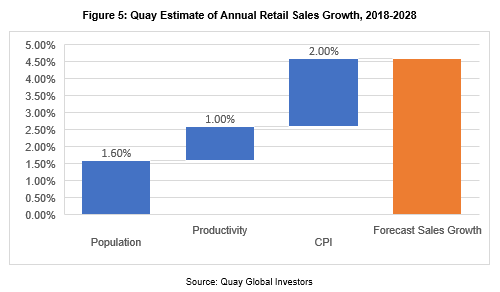 Australia’s population growth is double that of the United States (Figure 6), giving our local retail exposure a stronger secular tailwind. Based on simple demographics, inflation and real consumption, over the next 10 years current retail sales of approximately $300 billion will grow by $200-250 billion ($500-550 billion in total, assuming compound growth between 4.6-5.6%).

Assuming ‘pure’ online penetration of 20% (currently 2%), around $100-110 billion of this will occur online – leaving a substantial $100-140 billion of additional sales through physical bricks and mortar channels.

With the structural decline of mid-market retail, we believe the vast majority of this incremental $110-$140 billion will arrive through best-in-class malls. If an investor is forming a view on Australian retail and ignoring the demographics, they are doing it wrong.

United States – as dwellings get smaller, storage gets bigger

Like most of the Western world, US population growth is expected to increase at a declining rate (Figure 6). 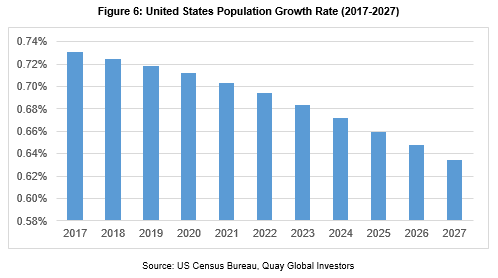 However, under this smooth projection are some big changes in specific age cohorts (Figure 7), leading to specific sector implications. 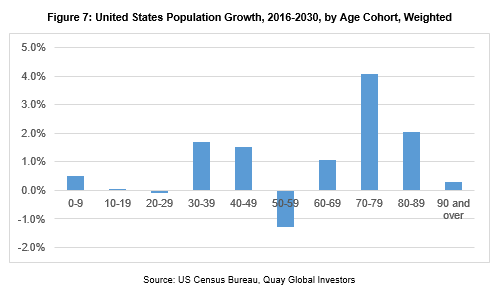 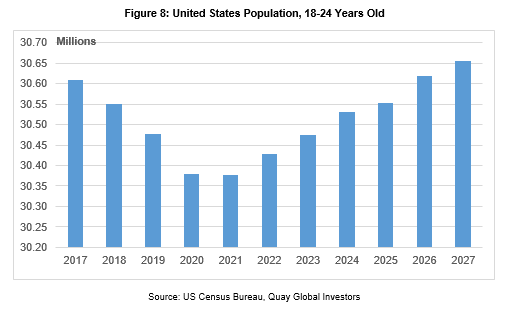 The college-age population, according to the US National Center for Education Statistics, is between 18-24 years old. The population projections for this cohort do appear as a headwind for college enrolment (and thus demand for student housing), but we know college enrolment as a percentage of the 18-24 population has been increasing since 1970.

Using these projected population growth rates and enrolment projections from the US National Center for Education Statistics (Figure 9), we forecast the enrolment rate of 18-24 year olds to increase to 46.5% by 2026, up from 41.2% in 2016 (Figure 10). 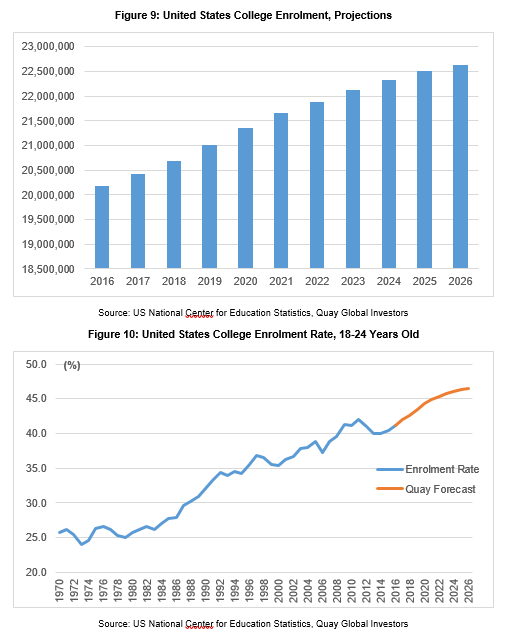 In light of this, we are still favourable towards student accommodation in the United States. Two of our investees dominate the US student accommodation market, benefiting from a large renewal pipeline (redeveloping the old dorms and frat houses the baby boomers occupied in the 1960s), gaining greater market share in the high barrier to entry ‘on campus’ market.

Known as the ‘echo boomers’ or ‘Gen Y’, this age cohort graduated within the past 10 years and are establishing their careers and enjoying life. This is often the time they buy lots of stuff, move around different jobs and rent an apartment.

This age cohort has driven increased demand for storage and multifamily, particularly given renters are three times more likely to use storage than owner occupiers. We believe the growth for this sector can continue through to 2024 in line with increased population growth (Figure 11). 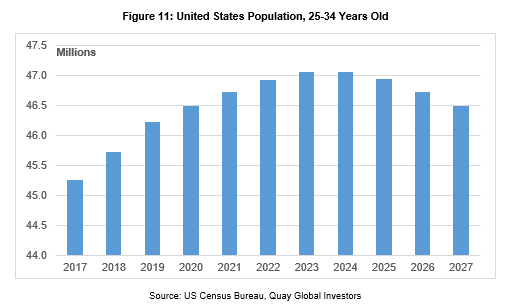 Compounding the growth for multifamily and storage, this age cohort is choosing to remain living at home for longer in large numbers, likely due to high levels of student debt and the cost of owning a home (Figure 12). 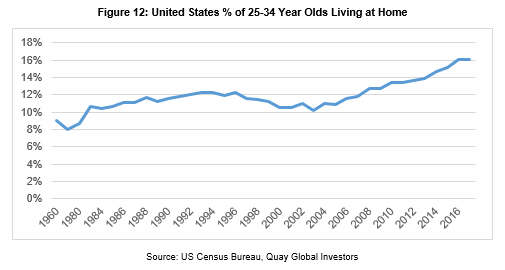 However, these kids can’t live at home forever. There is a sizable level of pent-up demand for accommodation in addition to the current robust demand from a strong US economy, shown by the age range of those living in apartments owned by one of our investees, Camden Property Trust (Figure 13). 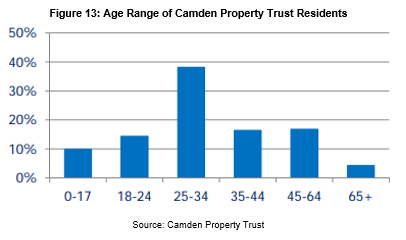 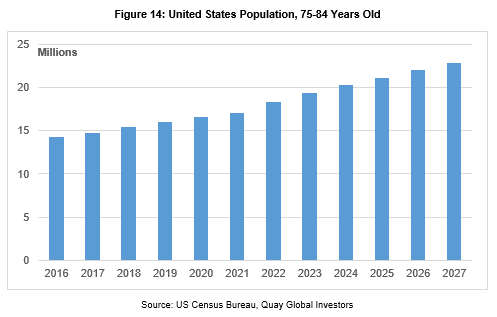 The ageing population has been a well-known investment theme over the past 10 years. However, in the US we can see a near-spectacular event that will occur in seniors housing over the next 10 years.

Americans celebrating their 71st birthday this year represent a demographic ‘gap’ (Figure 15, those aged 69 in 2016). Over the next 10 years, these increasing numbers of people will demand more specialised housing for their health and mobility needs. This often begins as independent living seniors housing before progressing to more acute forms of housing such as assisted living and memory care. 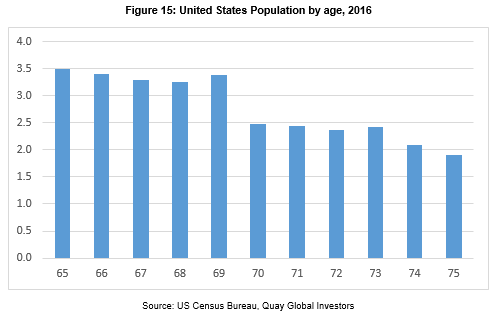 Figure 16 shows this ‘gap’ in a different fashion. In 2022 the first wave of baby boomers, those that were born in 1947, will turn 75 years old – spiking the population growth of the 75-84 age cohort upwards. 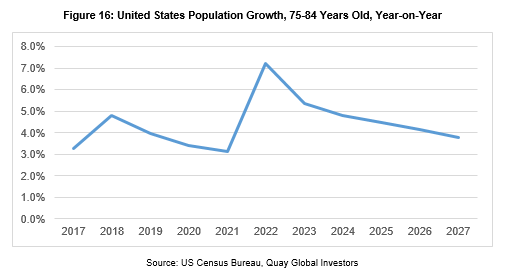 It is this 75-84 age cohort that begins to look at seniors housing. However, it’s not just demand that impacts real estate returns – we are also keen observers of real estate supply (Figures 17 and 18). 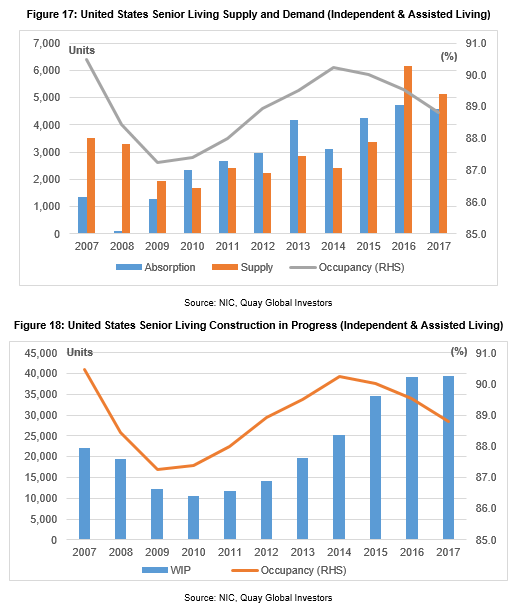 The seniors housing market has been impacted by supply over the past two years, but the number of building starts has decreased since then. This likely means that supply will decrease in the next two years to 2019.

With a large uptick in the 75-84 year old population from 2022, building permits would need to accelerate this year for those projects to be completed by 2020 and leased up by 2021 (based on our discussions with management of one of our investees). The data currently shows a slowing down of construction starts, and if supply doesn’t appear to increase by 2022 it could make seniors housing a very interesting investment proposition.

Rather than report EU-level statistics and show a large middle-aged population that will age over the next 20 years, we have specifically looked at the demographic outlook for the young and old – as the young create new households and the old require more specialised housing. We have focused on the demographics of two countries in particular, Germany and the UK. The German population by age appears in Figure 19 – note the data to 1990 only included West Germany. 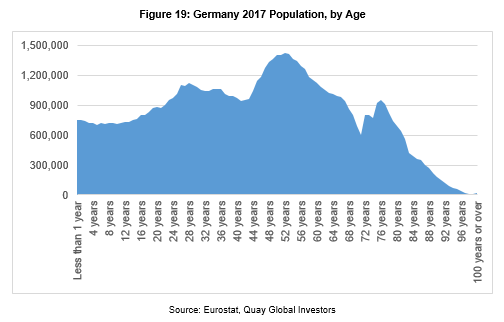 This chart tells an interesting story. While the ‘Anglosphere’ was coming out of the Great Depression, Germany under Nazi rule was experiencing a population boom as can be seen by the spike in people born in 1941 (aged 77 years). As the war went on, birth rates rapidly declined before reaching a low in 1946 and subsequently rising as West Germany rebuilt.

We are only invested in German apartments, which capture most of the adult age cohort (Figure 20). In this area we do not foresee a demographic headwind in Germany until 2023, notwithstanding changes in immigration as well as less people per household (a trend now occurring in Germany). 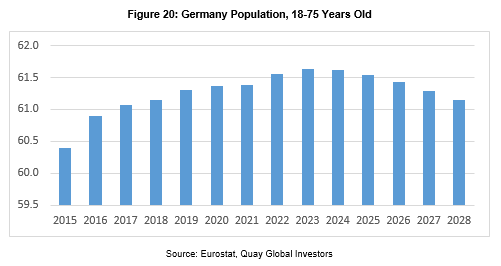 The UK, however, tells a very different story (Figure 21). 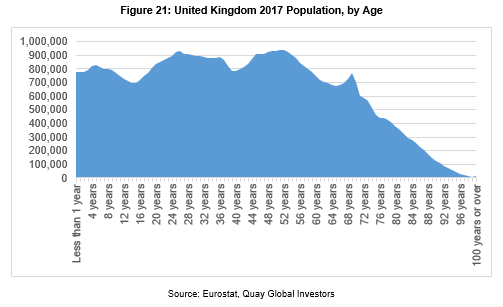 The UK population is ageing, but there is also a rapidly growing cohort of young people just about to begin high school, who will be of university age in six years’ time. On top of growth in overseas students (not included), this will act as a further tailwind for UK student accommodation providers (Figure 22). 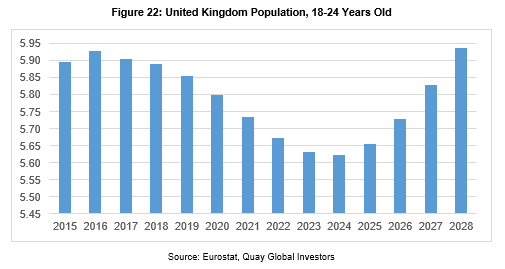 Meanwhile, the profile of young people in the 25-34 age bracket – the age at which household creation begins – looks positive (Figure 23).\ 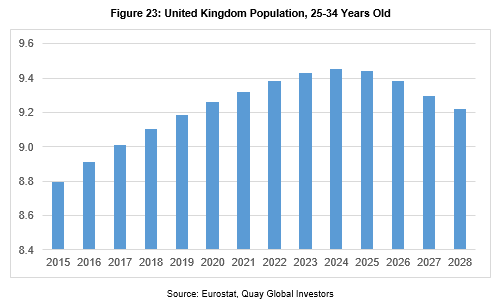 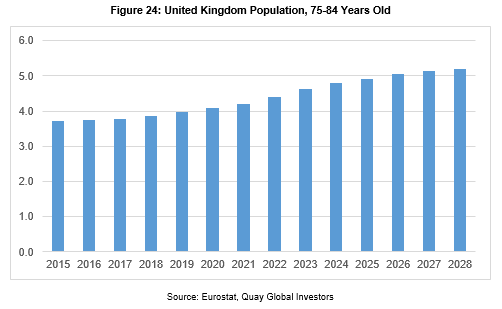 We look at our investment universe and see robust population growth in Australia; two significant generations impacting US real estate; and an ageing natural population in Europe shaped by war and immigration.

Australian population growth – which is higher than most of the developed world – will continue to benefit nominal GDP. This leaves room for bricks-and-mortar retail sales to still grow meaningfully, even after factoring in a significant rise in online retail penetration.

As the ‘echo boomers’ in the United States are establishing their careers and households, we can still see increased demand for multifamily and storage units. Other social and economic factors like higher university enrolments, high levels of student debt and stay-at-home kids also impact this.

The United States will experience a spike in 75-84 year olds in 2022, and we watch the senior housing sector closely to see how it can accommodate this. An increase in demand without the supply to match it could result in increased returns.

It is easy to get absorbed in these charts and begin to believe that a changing trend translates into investment returns. However, while we look at demographics closely, it is not the sole determinant of investment returns. Our research process aims to identify companies that offer the most compelling risk-adjusted returns, and common contributors include the real estate supply outlook in the specific markets in which our investees operate, macroeconomic and social factors affecting demand, management quality, asset quality and various other factors.

But the slow-moving beast moves inexorably towards economic change, and can’t be ignored. For long-term real estate investors, demographics do matter.