In August last year, we highlighted that real estate (listed and direct) tends to outperform equities during periods of high inflation.

We have previously cited the following chart as evidence of this dynamic.

Digging into the data, we found real estate outperforms equities during periods of moderate inflation (3-6%) as well as high inflation (+6%), all the while delivering positive real total returns (inflation up to 6%) or preserving real purchasing power (inflation above 6%). In fact, the ‘sweet spot’ for real property returns was between 3-6%, while inflation above 6% is devastating for equities (see following table).

Interestingly, real estate underperforms equities (albeit only slightly) when inflation is sustainably below 3%. This evidence is contrary to the conventional wisdom stating real estate does best when inflation and interest rates are low (despite Japan providing 20 years of evidence to the contrary). For more on this analysis, refer to the original article here.

Before we turn to the data, let’s examine the logic and reasoning why these assets have the reputation as a hedge against rising prices.

Theoretical underpinning of real estate as an inflation hedge

It is generally cited that real estate acts as an inflation hedge because rents are often linked to CPI. In our view, this is not a solid argument. Rents are ultimately set by market forces governed by supply and demand. Lack of supply can result in rental growth significantly in excess of inflation (for example, current US single family rents are growing at +10% per annum), while excess supply can see rents fall irrespective of inflation (for example in the current environment, office). 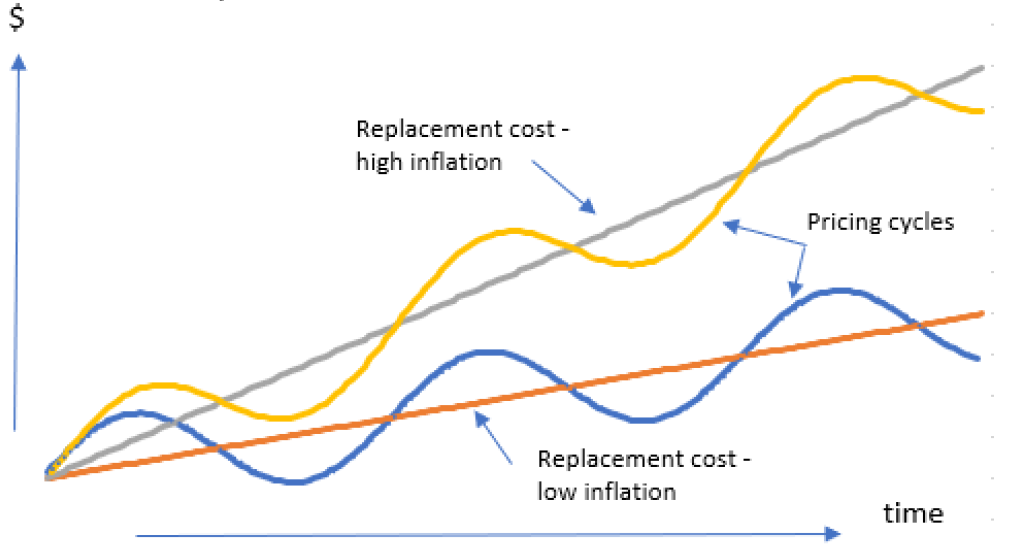 As inflation and the cost to build accelerates, new development feasibilities fail to ‘pencil’, restricting supply relative to demand. The only scenario where new supply is delivered is if property prices catch up to building costs, delivering investors capital returns that match rising construction costs (with the yield added, resulting in real positive returns).

Theoretical underpinning of gold as an inflation hedge

The more direct relationship between gold and inflation is tied back to earlier monetary systems. For much of the first half of the 20th century, most Western monetary systems were based on a gold standard, whereby governments restricted the amount of money to a fixed ratio of gold reserves. Gold was then used to settle international accounts (from trade imbalances). When governments expanded the money supply (say during periods of war)[1], the price of gold would eventually adjust upwards to reflect the new ratio.

Post World War 2, the relationship between gold and inflation was tied via the Bretton-Woods agreement, whereby member nations would ‘peg’ their currency to the reserve currency (the USD). The peg would be managed by nations adopting monetary and fiscal policy that stabilised exchange rates within 1% of the USD. The USD in turn would be convertible into gold at a fixed ratio of (initially) US$35 per oz. Each member country had full convertibility to the USD (facilitated by central bank reserves), which in turn was convertible to gold. Since gold was relatively fixed, any increase in monetary base would result in a repricing of gold relative to the USD and by extension all pegged currencies.

The Bretton-Woods scheme worked well initially because the US enjoyed significant trade surpluses at the expense of a war-ravaged Europe and South East Asia. Further, the US was home to approximately two thirds of all known gold reserves, further underpinning the credibility of the system. Inevitably the war-affected regions regained their competitiveness, and the US was caught in an expensive war in Vietnam. US trade surpluses turned into deficits, and US gold reserves dwindled. By August 1971 the US government ended USD convertibility into gold. In effect, the USD was floated, and in the following years other countries abandoned the peg and adopted flexible exchange rates – all of which gave birth to the modern monetary system.

Since the abandonment of the Bretton-Woods agreement, the relationship between gold and inflation has been far more tenuous.

What the data shows

To measure the performance of gold and real estate during periods of inflation, we adopted the same methodology as our August 2021 paper. Using data from 1971 (which reflects the period when convertibility into gold was abandoned), we looked at various levels of inflation and measured the total returns from listed real estate (US REITs) and gold.

The results are summarised in the following table.

Breaking the data down into 1% bands, we get the following outcomes.

The more detailed analysis highlights that gold’s outperformance occurs when inflation exceeds 8% per annum. Up until this point, real estate tends to deliver better returns.

Digging into the data a little further, the period of +8% inflation reflects the periods from Oct 1973 to Aug 1975, and Sep 1978 through to Jan 1982. In short, gold’s outperformance is based on +40-year old data, a time when investor behaviour was potentially influenced by a recently abandoned monetary system. Today, the linkage between gold and inflation is not as concrete as under previous systems, and therefore caution should be exercised in assuming gold will perform as it did in the past.

Real estate – particularly listed real estate – lives up to its promise that under various levels of inflation, it delivers real total returns (up to 6% inflation) and at the very least, preserves the purchasing power of capital (inflation above 6%). During these high periods of inflation, real estate is the preferred asset class compared to equities. Importantly, this performance is not based on faith, but on the strong economic relationship between real estate and inflation. That is, prices oscillate around replacement cost over time, and replacement cost is tied to inflation.

Gold also previously lived up to the promise of an inflation hedge. Indeed, in periods of high inflation (+8%) gold outperforms real estate, and by extension, equities. However, the direct relationship between gold and inflation no longer exists, and data supporting gold as an inflation hedge may simply be a function of ‘market memory’ of a system long since abandoned.

[1] Governments generally abandoned the gold standard during the major world conflicts of the 20th century.